Get The Inside Scoop Of Max Holloway’s Dating Affairs, Girlfriend, Wife, Children, Career, Net Worth, Wiki-Bio 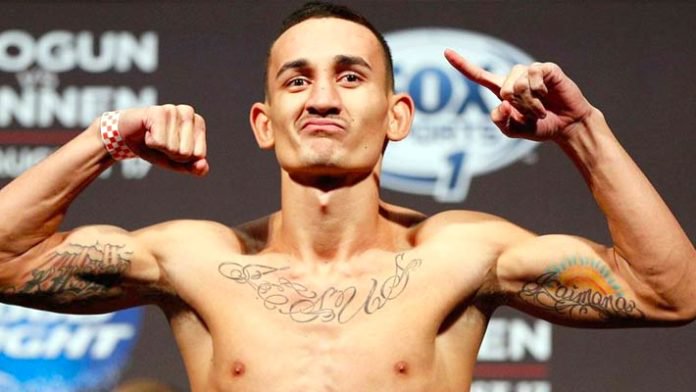 Living a life of a professional martial artist can be very tough and challenging. You have to put everything on the line just to entertain the audience. By just watching a fight between two martial artists, we can see the sacrifices that they make by putting their body on the line.

Max Holloway is one of the martial artists that has made a name for himself. Through his harsh training and continuous effort, he has won a lot of fights and is now holding the UFC featherweight belt.

Talking about Max Holloway dating affairs, there was a rumor that Holloway was dating supermodel Moani Hara. Moani Hara is a professional model and hula dancer who had also held the title of Miss Hawaii USA in 2014. The rumors of their affair came out to be true when he posted a picture with her captioned ‘Great time with my lady.’

Holloway announced his relationship with Moani officially during an interview with The MMA Hour.

Before having an affair with Moani Hara, Max Holloway was already married to another lady. The woman goes by the name of Kaimana Pa’aluhi. The couple dated for a long time. After a long affair, Kaimana and Holloway decided to take their relationship to the next level by tying the knot.

In 2012, the two got married and are living a happy married life since. When Holloway was struggling to make it big in UFC, his wife was always there for him. The couple shares a son together.

Unfortunately, the pair split after a few years of their married life, and now Holloway is dating Moani Hara, and Kaimana is busy doing her stuff.

Max Holloway’s career kicked off at the age of 19 when he entered into the world of mixed martial arts. He was the youngest fighter on the UFC when he made his promotional debut. On February 4, 2012, he faced Dustin Poirier, but he lost the match via submission. In his second fight, he went against Pat Schilling, and he won the battle.

On October 4, 2014, Holloway came as a replacement for Chang Sung Jung and faced Akira Corassani. He defeated Akira via knockout in the first round which earned him his first ‘Performance of the night’ bonus award.

On April 18, 2015, Holloway won the match against Cub Swanson for which he earned his second ‘Performance of the night’ bonus award. Holloway faced Charles Oliveira on August 23, 2015, and he won the fight via TKO. With this win, he became the youngest fighter in UFC history to get ten wins.

On June 3, 2017, Holloway faced featherweight champion, Jose Aldo. Holloway defeated Aldo via TKO in the third round, and he won the bonus award for ‘Fight of the Night.’

On November 8, 2017, the two again faced each other and the outcome was the same. Holloway won the fight via TKO in the third round and retained the UFC Featherweight belt.

You Might Also Like: Max Irons Dating Activities Revealed! Will The Sophie Pera Boyfriend Tie The Knots With His Fourth Girlfriend For A Married Life? Also Find His Wiki Details Here

Max Halloway is a very talented martial artist and is now holding the UFC Featherweight belt. His current salary from UFC is estimated to be $260 thousand. Since he is one of the greatest fighters in UFC, his net worth is expected to be on a higher scale.

After the fight with Jose Aldo, Max Hooloway’s net worth rose steeply. He is now one of the highest paid fighters in the UFC. He has an estimated net worth of $1.5 million.

Jerome Max Kelii Holloway was born on December 4, 1991, in Waianae, Hawaii, United States. He is 26 years old in 2018. In 2010, Holloway graduated from Waianae High School, where he began to learn kickboxing. Holloway’s nationality is American, and he belongs to the white ethnicity.

Max Holloway’s zodiac sign is Sagittarius. He has a very athletic body. Most of his upper body has tattoos. Holloway stands 5 feet 11 inches tall, and he weighs about 66 kg. Holloway has brown hair, and his eye color is brown. He is usually active on social media like Instagram and Twitter.