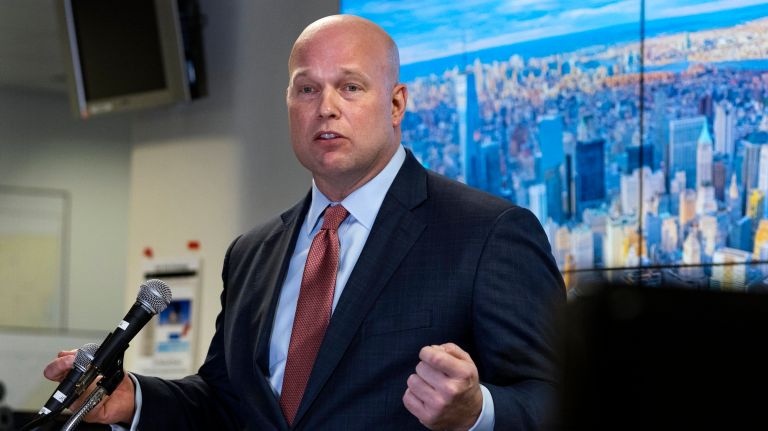 Matthew Whitaker is a current Acting United States Attorney General, who held the position a few weeks ago. On 7th November 2018, President Donald Trump appointed him for the position after Attorney General Jeff Sessions resigned at the president’s request. Previously, Whitaker served as chief of staff to Sessions from 22 September 2017 until the President appointed him as Acting U.S. Attorney General. According to legal scholars, Whitaker’s appointment is unconstitutional as he never received Senate confirmation.

Read more: Who Is Brenda Snipes? Explore Her Wiki Facts, Bio, Husband, And Net worth

Matthew is a family guy who is happily married to his wife named, Marci Whitaker. His wife, Marci is a Civil Engineer. She graduated with Bachelor’s in Science from the University of Iowa. She has also worked for a water treatment company named, MC2H20 since 2011.

Though Matthew and his wife, Marci, have different professional backgrounds, they get along quite nicely. The husband and wife have welcomed three children- Calvin, Alison, and Lincoln. Whitaker’s family are Lutheran Evangelicals.

Matthew has quite a romantic love life as he and his wife are college sweethearts. They met while attending Ankeny High School in Ankeny, a city in Polk County, Iowa.

Even after so long, Matthew and Marci are living happily as husband and wife without any rumors of divorce or splits.

Matthew Whitaker Salary and Net worth

Matthew Whitaker has an accumulated net worth of $17 million.

After Matthew graduated from Law School, he worked in different regional law firms like Finley Alt Smith (Des Moines). He also worked for a grocery company, a daycare, and in a trailer manufacturer company as a corporate counsel.

Before becoming Attorney General, Matthew worked as a Chief of Staff from September 2017 to November 2018. Back in 2002, he became the candidate of a party named Republican party for Treasurer of Iowa. Later, he worked as the United States Attorney for the Southern District of Iowa from 2004 to 2009.

He then stepped his first foot towards politics by running for the United States Senate in 2014 from Iowa. He also spoke in various radio shows and TV-news as the director of the Foundation for Accountability and Civic Trust.

His career skyrocketed when he got appointed as the Attorney General of United States.

Whitaker earned more than $1.2 million in salary while leading a tax-exempt organization that doesn’t reveal it’s donors. According to the reports, he received an annual salary of $904,000 from the Foundation for Accountability & Civic Trust. As a legal commentator, he received $15,000 in salary from CNN.

Matthew George Whitaker was born in 1969 in Des Moines, Iowa. He celebrates his birthday on 29 October, which makes his age 49 at present.

His father was a car salesman, and his mother a school teacher. Nothing more has been revealed about Whitaker’s family and parents.

Whitaker attended the University of Iowa after graduating from Ankeny High School. He completed Bachelor’s degree in communications and a Master of Business Administration too. He also graduated with a law degree in 1995.

You Might Also Like: Who Is Jodi Faeth? Know Her Wiki-Bio, Husband, Children, Married, Spouse, Age, and Height

For the University of Iowa Hawkeyes football team, Whitaker played tight end and played in Iowa’s Rose Bowl game in 1991.