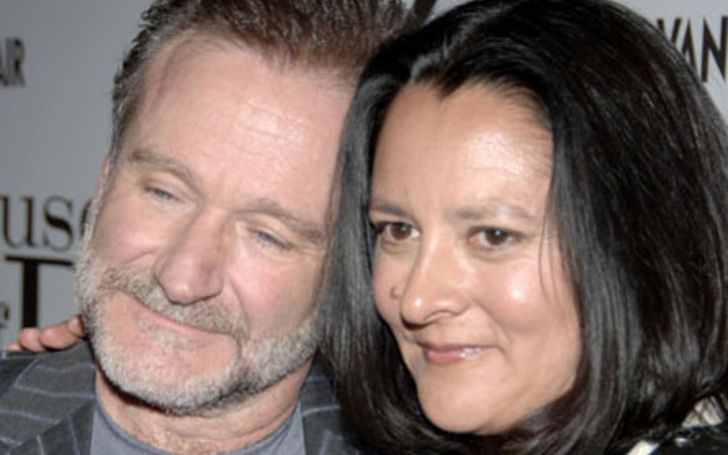 Marsha Garces is a relatively household name in Hollywood related with Robin Williams. She is the ex-wife of Robin Williams and was married to him until 2010. We can also see Marsha in Robin Williams: Come Inside My Mind.

Marsha has produced many movies and projects and involves herself with various non-profit organizations. Read further to know more about her life.

Who is Marsha Garces?

Marsha Garces, born as Marsha Lynn Garces in Milwaukee, Wisconsin, on June 18, 1956. Garces’ father, Leon Garces, was a Filipino who moved to the US in 1929 and also served in the United States Navy during World War II. Her mother, Ina Rachel Mattila, was Finnish.

Garces is a film producer who has been active in the film industry from 1991 to this date. Her movies include Mrs. Doubtfire, Patch Adams, and Robin Williams: Live on Broadway. She has also been nominated for various awards following her showbiz career.

Garces won the 1993  Golden Globe Award for Best Motion Picture–Musical or Comedy for her movie Mrs. Doubtfire. Similarly, she also got nominated for  2003 Primetime Emmy Award for Outstanding Variety, Music, or Comedy Special for Robin Williams: Live on Broadway.

Marsha Garces’s Personal Life: Who Is Her Husband?

Marsha Garces is reportedly single as of now after she divorced her former husband Robin Williams in 2010.

Garces married Robin Williams on April 30, 1989, following the 1988 divorce from his first wife, Valerie Velardi. Garces was already pregnant with Williams’ son when the pair walked down the aisle in 1989. She also worked as a nanny for William’s son Zachary Pym Williams.

The producer and Robin’s romantic relationship began in 1986. The couple had two children during their marriage; Zelda Rae and Cody Alan, born in 1989 and 1991, respectively.

Unfortunately, the couple split up in 2010 as Marsha filed for a divorce. In March 2008, Marsha filed for divorce from Williams saying that there were irreconcilable differences in their relationship. Subsequently, their divorce finalized in 2010.

Before Robin Williams, Marsha married Timothy F. Teteak. She tied the knot with him on 11 June 1977. However, after the split with Timothy, she again hitched with Robert Francis Lamirande on 5 April 1982. But, none of those relationships worked for her.

Marsha Garces’s Net Worth: How Much Did She Earn?

Marsha Garces has an estimated net worth of about $25 million. Her ex-husband, Robin Williams lost millions in his divorce to Marsha. Therefore, the divorce also shot up her net worth a significant amount.

Marsha also makes a good amount of money from her film productions. Her 1993 film Mrs. Doubtfire earned a net total of $441,286,195 in the worldwide box office against the budget of $25 million.

Likewise, Garces also involves philanthropically with organizations such as Doctors Without Borders and Seacology.

Marsha Garces auctioned off Robin Williams’s belongings on October 4, 2018.  HSe sold many of his belongings such as 40 of his watches, furniture, and sculptures. Garces gathered a total of around $300,000 from the auction. She donated all the amount raised to charities which Marsha and Robin championed.

Where and when was Marsha Garces born?

What nationality does Marsha Garces belong to?

What is Marsha Garces’s ethnicity?

What is Marsha Garces’s eye color?

Which color of hair does Marsha Garces have?

How tall is Marsha Garces?

How old is Marsha Garces?