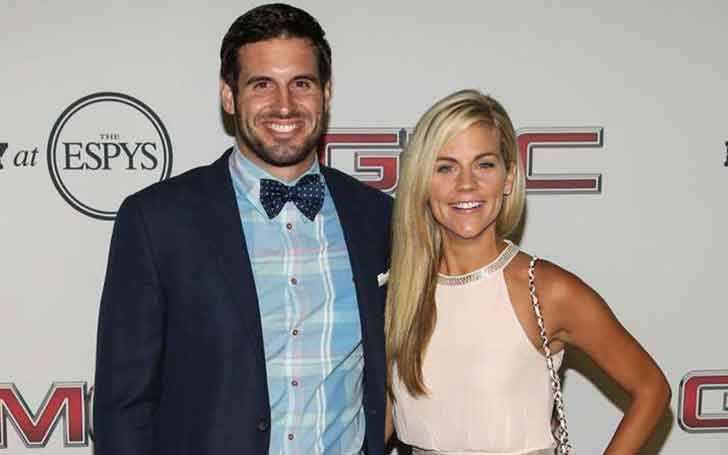 The dark clouds have disappeared from  Samantha Ponder’s life and her days couldn’t have gotten any brighter. Her love life, as well as her professional life, seems to be at an outrageous hike. She has been having great family time with her husband and children. Not only is she enjoying her blessed family but also her esteemed career upgrade.

She also has gotten a new twist in her career which only works for the betterment of her. But is there a relationship between her married life to an American football player and her career upgrade in sports journalism? Let’s find out what are the recent upgrades with her life.

Married to Christian Ponder, was pregnant and just gave birth to the second baby

She was pregnant a few months back earlier and she gave birth to her newborn child in June of 2017. She does seem very proud of her newborn and who wouldn’t be? He is so adorable!

Meet Robinson True Ponder. He goes by True. He was named after Jackie and David… two men of courage who weren’t/aren’t afraid to hold to their convictions and take the road less traveled. We love you forever, True. Here’s to a new great adventure. ❤️

They seem to have a great married life and are healthily expanding their family. There definitely must be some perks of being an NFL footballer’s wife. Let’s get on to her career life now.

Samantha Ponder, New Face of ESPN show; having a husband in the game is an advantage

The show aired on ESPN named “Sunday NFL Countdown” will now be hosted by Samantha Ponder. We are really excited about it because we get to see Samantha smashing the show with her talents and putting all the unjust criticisms to rest. She was judged a lot for her sudden career turn of being a sideline reporter to being a TV show host by the media.

Many claimed that it was because of her fame and power she gained as a wife to an NFL player which got her the promotion. She agrees to it but on whole different levels. She claims that her acquaintance with an NFL player only helps her in getting to know more of the game context and analyzing it better. She says,

“In my experience, the more you know about a player, a coach or team, the more likely you are to have more nuanced, interesting information and better context for analysis”

She has a full mind set on becoming the ultimate host to the show. She further says,

“I’m not ashamed to know guys in the league on a personal level, and I’m certainly not going to try to hide who my husband is because I am immensely proud of the man I married. I’m well aware of the criticism that evokes among some fans, but I trust that over time, the way I do this job will put much of that to rest.”

We totally admire her spirit and hope that she gets spiritually paid off for all the hard work she has put to the success of her new show “Sunday NFL Countdown.”

Samantha Ponder is an American journalist, reporter and now a Tv show host who has her birth date on 11th December 1985.

She has worked as a reporter, sideline reporter, co-host and many other journalism jobs in her lifetime. Her work was associated with shows like ESPN college football, College GameDay, ET edition on ESPNU, ESPN’s Thursday Night College Football, BattleBots, etc.

She is currently the TV show host of ESPN “Sunday NFL Countdown.” This sensational journalist also has an enormous net worth along with her highlighting career line.  From all the assets she owns and the pay she gets from the TV channels, she has an attractive net worth of $12.2 million.