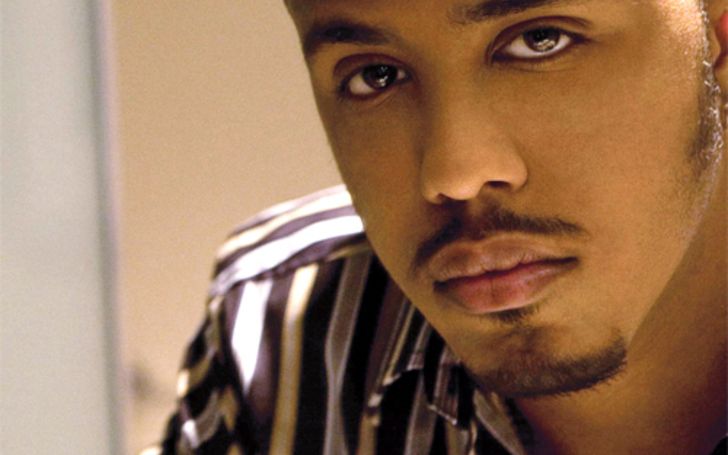 Marques Houston is a multi-talented person having his hands in various entertainment fields. Houston is an American R&B singer, actor, and also a producer. He got popularity with his role as Roger Evans in TV sitcom ‘Sister, Sister’. The actor got fame in his music industry after his hit album ‘Naked’. Along with this, he has also produced the 2010 horror film “Somebody Help Me 2”.

The talented Houston was born on 4th August 1981 with the birth name of Marques Barrett Houston. His parents are Michael Houston (father) and Carolyn Houston (mother). The actor grew up in his hometown of Los Angeles with his three siblings, two sisters, Brandye and Danielle Houston, and a brother, Brandon.

Actor Houston got his early education from Montebello High School. Acting always fascinated him and he began acting at a very young age. After, he became a member of the theatre team in high school and got a chance to appear in various shows. Similarly, he also developed an interest in singing and his family always supported him to pursue his career.

Talking about his relationship status, he has dated a couple of female celebrities in the past. He once dated Mila J. but their relation didn’t last long. Then after, he was in a short relationship with actress Jennifer Freeman. From the year 2008, he dated Marlena Campbell for about 7 years.

Putting behind all those past affairs, The 39-year-old singer is now married to a 19-year-old Miyana Dickey who is an American model. They had engaged since march 2019 and got married in a not-so-secret small ceremony on 24th August 2020. Their marriage has been uprising various questions based on their age difference and relationship status. Also, visit his Instagram to know him personally.

As Marques was always wanting to be a musician, he got a chance to start his music career forming a band ‘Immature(IMx)’ along with Jerome Jones, Chris Strokes, and Don Santos. The band released two albums and got small fame. After their cooperating work for about 10 years, they separated and he surprised the world with his solo debut album “MH” in 2003. The songs were loved by the public and the album peaked at no.20 in Billboard.

With his first album, he was gaining some respect in the music industry and was making way to the top singer. The year 2005 was a breakthrough year for him as his second album “Naked” got released and got a lot of appreciation. Further moving on, he released his third album “Veteran” on 20th March 2007.

Following his rising music career, he consecutively released his fourth and fifth album in 2009 and 2010. Marques got reunited with Imx in 2014 and went on to tour to perform numerous songs. After that, he dropped his sixth album ‘Famous’ on 27th August 2013.

Besides, he is also a fine actor. Starting his acting with the sitcom “A Different World”, he made his introduction in the film industry. The role of Roger Evans made him a star after the release of the American television sitcom “Sister, Sister” in 1994. With the appreciation of the audience, he portrayed the role until 1999.

With the love and support, he also won the Young Artist Award for Best Youth Comedian for his role in the Sitcom. Along with TV Series, he has made his special appearance in numerous movies like ‘Battlefield America’, ‘Bebe’s Kids’, ‘Fat Alber’, ‘A Weekend with the Family’ and ‘Somebody Help Me’.

The actor/singer is gaining respect in both the music and film industry with his hard work and determination. He may also appear in other upcoming movies and TV shows. After dropping six full albums, he hasn’t disappointed fans and followers.

Marques Houston Net Worth and Salary

Being a talented singer, actor, and producer, Marques has been collecting a handsome amount of money from his career. His total net worth is estimated to be around $6.5 million as of 2020. With his song albums and movies, we can assume his salary is also very good. However, with his good earning, he is living a luxurious life.