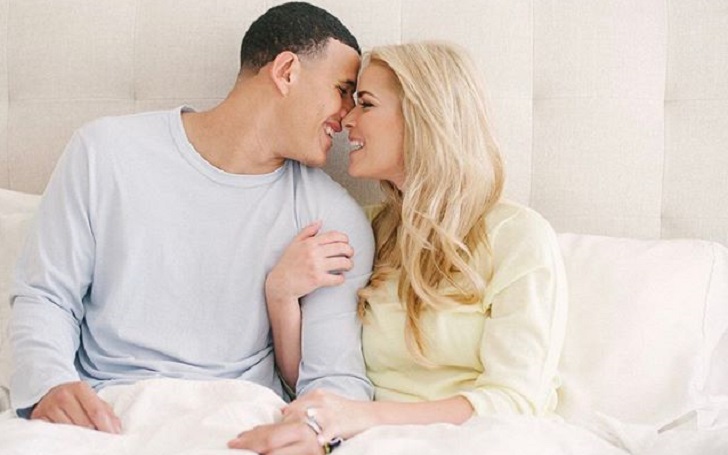 Yainee Alonso is famous for being the wife of Dominican-American professional baseball third baseman Manuel Arturo Machado aka Manny Machado. She is also popular as Yonder Alonso’s sister.

Yainee Alonso, the wife of Manny Machado is the sister of the major league player Yonder Alonso. And Yonder is the first reason behind Machado and Yainee’s relationship. Sources claim that Machado and Yainee first met through Yonder.

The couple was first brought together by Yonder, but the general Miami Sports Community made them even closer and eventually the two ended up falling for each other.

Happy Anniversary to my dearest!!!!! You will always make my heart skip a beat ❤️ I love you!

Alonso tried her best to maintain her personal and professional career away from the media despite millions of fans and paparazzi regularly followed her. There is no much information about Yainee Alonso, but while surfing around her LinkedIn, she seems to have followed her brother’s footsteps and has attended the University of Miami. She studied at the University of Miami from 2008 to 2012 earning a Bachelor’s Degree in Psychology.

She was once an active member of the Miami Marlins’ cheerleading squad.

As mentioned above, Yainee Alonso is famous for being Maddy Machado’s wife rather than for her professional career. Alonso and Machado fell in love with each other since a very young age.

It was back on 13 February 2013, when Machado announced that he and Yainee got engaged; actually engaged to be married. Machado while speaking with the Baltimore Sun also revealed that Yainee’s brother Yonder had much excitement about their wedding just as the couple had.

During the time of engagement, Yainee was 23 years old whereas Machado was only 20 years. Yes, Yainee is three years older than Machado, but the age gap does not matter to the couple.

Just after almost two years of engagement, Yainee Alonso married then fiancé and now husband Manny Machado on 6th December 2014. The couple tied the knot in Paris infront of their close friends and family.

Get To Know More: Is Manny Machado married or still Single?

Yainee and Manny actually married in a secretive wedding ceremony and did not disclose much information regarding their marriage ceremony. Yainee looked beautiful in the white-lace wedding dress whereas Machado looked dashing in a tuxedo.

Bringing in the New Year with my favorites… my wife and a Cohiba Hahahaha !!! Happy New Year!!!!! Wishing everyone a blessed and healthy 2019!!!

As the couple married in a private wedding ceremony, there were no headlines about their marriage, but later the couple announced the good news via their respective Instagram. All those wedding photos are proof that the couple has already tied the knot privately.

Now, it’s been years that Yainee Alonso married Manny Machado and is living a happily married life. There is no any headlines of the couple’s divorce or separation nor such issues are ever talked in the media. We have also never heard any of the couple’s controversies ever published in the magazines.

The pair is deeply and madly in love with each other and is often spotted hanging out on vacations together. If you go across Yainee Alonso and Machado’s Instagram, you see their pictures together with a loving caption. Those photos clearly reflect that the couple is happy together and is supportive of one-another.

What an end to a great season with 163 games!!!! Couldn’t have done it without you by my side!!! Thank you to all those who said I couldn’t do it! NOW… Who’s ready for playoffs????? #thebestcoast #letsgo

The duo does not have any child till the date. Also, there is no news of Yainee Alonso’s pregnancy in the media. The couple is still enjoying their honeymoon phase and is not in a hurry to welcome a new member to their family.