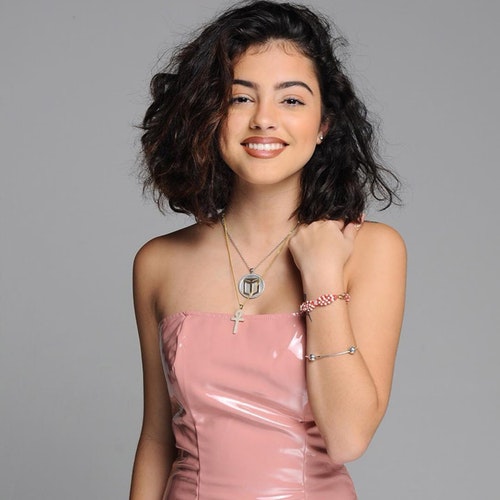 The word social media sensation fits perfectly to a Cuban-American dancer, singer, and media personality, Malu Trevejo. The 16-years-old stunner is eminent for her Musical.ly videos and excellent dance moves.

Despite being so young, Malu Trevejo is as much popular as any other grown-up celebrities. She promotes the shopping app Mercari from which she often provides gifts to her fans. Malu also released her début single Luna Llena from Universal Music Latin on September 22, 2017. Moreover, she also brought two new songs En Mi Mente in 2017 and Hasta Luego in 2018.

Are you eager to know more about her? Let’s know Malu Trevejo biography, dating affairs, boyfriends, parents, age, and net worth.

Malu often discloses everything about her professional and personal life through her social media accounts. As she is in her early teens, she isn’t dating anyone right now. She hasn’t shared any relevant information about her present relationship and boyfriend.

As of now, Malu Trevejo is single and not dating anyone. However, she might probably be secretly dating. She once had posted a picture with a man on her Instagram who was rumored to be her boyfriend. But Malu herself hasn’t made anything public about those rumors. So, Malu is most probably single and could be looking for a perfect boyfriend.

The Instagram star, Malu Trevejo was born on October 15, 2002, in Havana, Cuba. She was born to a Cuban mother and a Spanish father. She spent her childhood in Madrid. Later after 11 years, she came back to Miami, the United States with her mother. Malu is currently in her high school completing her studies.

Someone bring me an avocado 🥑 😆💕

Malu Trevejo came to the limelight after her photos and videos on Instagram earned more than millions of followers. After the app named musical.ly released in 2014, she started posting her dance videos and lip-sync videos. Not only on Instagram and musical.ly but also Malu has a massive fan following on other social platforms. She is one of the youngest social sensations of the generation.

Besides this, her debut single Luna Llena which was made under the production of the Fliptones reached 33 million YouTube views within seven weeks of release and entered at 27 in the Billboard Hot Latin Songs. Furthermore, she also became further famous due to her songs Hasta Luego and En Mi Mente.

Besides these, Malu is also into modeling, and she is often seen in the magazine’s covers. Malu also posts her dancing videos and make tutorials on Youtube. In May 2018, Malu went on a tour.

Malu Trevejo endorses many popular brands through her Instagram account. Along with that, she has gained many modeling consignments. Concerning her net worth, Malu hasn’t revealed it.

As of 2018, Malu Trevejo’s estimated net worth is $1 million which is equal to that of Ethan Cutkosky.

Malu belongs to American nationality and White ethnicity. She has a Latin descent and she has a twin sister who is also her best friend. Her birth sign is Libra.

Malu has a height of 5 feet 4 inches, equivalent to whereas she weighs around 98lbs. She has a body measurement of 32-20-32 inches. Malu has dark brown colored eyes, and Black and Dyed Blonde hair color. She likes nail arts and tattoos. She loves to pose in a bikini. Malu is also interested in makeup.