Luann D’Agostino’s Married Life With Her Ex-Husband Tom D’ Agostino: Divorced After Being Husband and Wife For Just Seven Months! 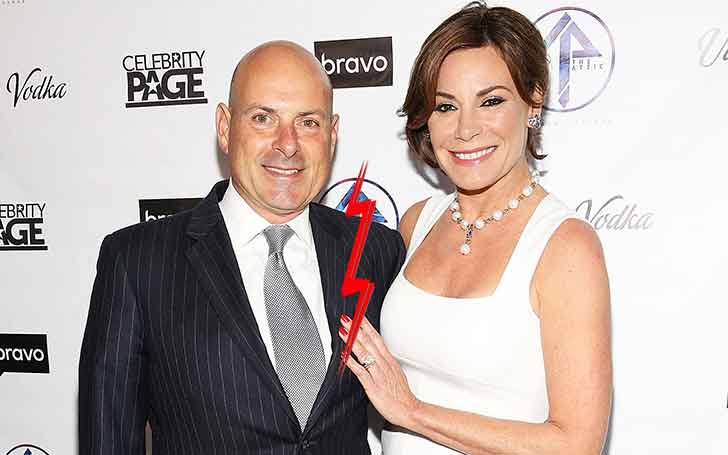 Marriage is a bond between the two people that supposedly last until death. However, in real life practice, is cut short by divorce. Marriage is full of conflicts, and it is to the couple how they handle that conflict. At the rare, the couple ends to have a divorce. Reality star Luann D’ Agostino is currently having trouble in her married life and fighting back to save it.

“RHONY” star Luann D’Agostino is an American television personality, author, singer, and model as well. Her marriage is being a big storyline recently. Who was she engaged to? Is the rumor of her getting divorced true?

Read the content to know her after marriage life :

Luann is currently having a difficult time in her life. Her marriage met its end recently. Well, she was married to the president and CEO of Smart Souce LLC, “Thomas D’ Agostino,” only being together less than a year. The wedding ceremony took place in Palm Beach, Florida on New years Eve i.e. 31st December 2016.

Luann, 53, was very pleased with her marriage and she believed being married to Tom is like finding home again. Luann opined on her weekly Bravo blog–

You never know when or where you’ll find love. In this episode, Tom and I tied the knot in Palm Beach surrounded by our family and friends. Our wedding was magical and being married to Tom is like finding home again. When he wakes up, he reaches for me. When he plays, we play together! Tom makes me feel loved and whole, and I’m so grateful we found each other. Our day went off without a hitch, and even though Dorinda was a bit late to the pre-wedding glam session, it was no big deal.

But their marriage always has a cheating scandal from the beginning. There were many rumors of Tom’s infidelity including dating with two other cast members of RHONY’s, “Ramona Singer” and “Sonja Morgan.” Bethenny Frankel had presented photographic proof of Tom being unfaithful to Luann, a day before the Palm Beach Engagement Party, where Tom makes more than an hour with Playboy model at  New York’s Regency Hotel.

Knowing the rumors of Tom’s wandering eye, Luann said “I do” in the end. A source told People:

She went ahead with the wedding because she was very much in love and wanted to make the relationship work. Even though what she heard or what was printed, she was trying to make it work.

Being in critics, Luann announced on her Twitter account that she is having a divorce with her seven-month husband:

It's with great sadness that Tom & I agreed to divorce. We care for each other very much, hope you respect our privacy during this sad time!

After hours of the tweet, Luann was spotted out in Sag Harbor, without her engagement ring, wearing a yellow sundress.

The couple denied all the allegations which were supposed to be the reason for their divorce to Page Six, Tom replied about his infidelity:

I don’t think Tom had any actual affairs. There were women he kissed when he was out and Luann couldn’t turn a blind eye to it any more. He just wanted to be a bachelor and maintain his bachelor lifestyle. He wanted to eat and drink with his friends and go out and have a good time.

There was another rumor that Luann’s friendship with her ex-boyfriend “Jacques Azoulay” prompted Tom to file for divorce. But she shut down the rumor saying she and Jacques are just a good friend.

There are no any exact reasons yet revealed behind the divorce. However, their marriage didn’t work regardless of their effort. We hope both the couples will remain happy and have a good relationship with each other despite the divorce.

Luann Nadeau was born on May 17, 1965. She was raised in Berlin, Connecticut.

According to the Wiki, Luann was a licensed practical nurse in Connecticut as well as a model. Recently, she has filmed a role in the movie: Mother Of All Secrets.

Luann was previously married to Alexandre de Lesseps in 1993 and divorced in 2009. She has two children from Alexandre.

As Luann is one of the main cast members on Bravo’s reality series, she has a net worth of $25 million.