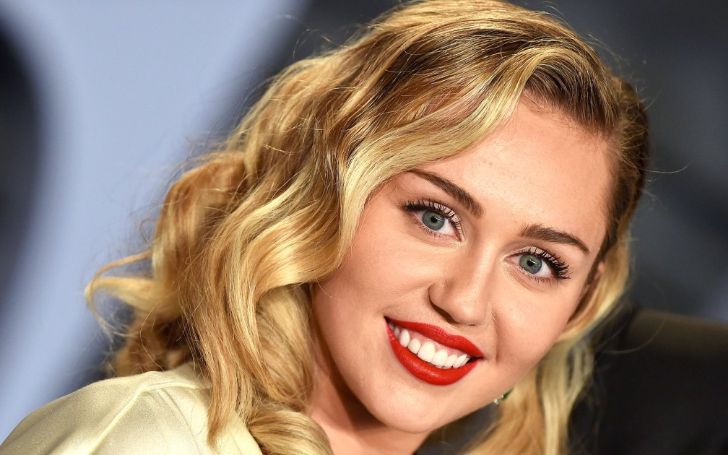 America has many renowned and talented artists and truth be told it is the place for global popularity. Singer and actress Miley Cyrus is among such lists of a category.

Often known for her notorious and mischievous works, Miley has made one of the recognizable names in the business. Here we will go through her Marriage, affairs, net worth, career and so on.

It was not long ago that Miley Cyrus and Liam Hemsworth got into a marital bonding, that the duo broke up. On Saturday August 7, 2019, Miley’s rep announced about her separation with Liam.

Liam and Miley have agreed to separate at this time.

The rumors of their breakup started after she didn’t wear her wedding band in a photo posted to her IG account.

Following her divorce, she is currently busy in Italy with Kaitlyn Carter. She and Kaitlyn packed on PDAs after they were spotted kissing each other. Follow the story here at It’s Over: Miley Cyrus and Liam Hemsworth Divorced After Less Than a Year of Marriage.

On December 23, 2018, Miley Cyrus and Liam Hemsworth married at Cyrus’ home in Franklin, Tennessee, US. The marriage was private and accompanied by family members and close friends.

Also at the wedding reception were Miley’s mother Tish Cyrus and her father Billy Ray Cyrus, her sisters, Brandi and Noah, and also, brother, Trace. Along with them. there were also Liam’s brothers, Chris, and Luke Hemsworth.

While they never confirmed they were planning to get married over the holiday weekend. Many fans began to speculate that they tied the knot after one of their friends posted many videos on their Instagram Stories of both Miley and Liam in their wedding dress and tuxedo.

Also, see: Meet Luke Hemsworth another star in making with details of his girlfriend,dating, family and brothers!

The couple later confirmed that they have officially married by sharing the photos of their wedding on their Instagram.

On December 26, Cyrus posted three photos of her and Hemsworth in their formal outfits, smooching and generally acting cute. “Ten years later,” she wrote

Liam Hemsworth also posted a photo from the important day of their life. The photo was alike to one of the three that Miley posted a day earlier with the caption, “my love ❤️.”

Miley Cyrus and Liam Hemsworth met while starring in the 2010 movie adaptation of Nicolas Sparks’ The Last Song. The couple even engaged in June 2012 but unfortunately parted ways after a year.

Both of them dated some people during their separation but they got back together in January 2016. Before her marriage, Miley dated Stella Maxwell, Patrick Schwarzenegger, Justin Gaston, and Nick Jonas.

Recently, the new pair honeymooned with the Hemsworth family.

Miley Cyrus became famous for the Disney Channel television series Hannah Montana when she was eleven years old. The series aired in March 2006 on Disney Channel and soon ranked among the highest-rated series on the network.

The immediate success of the series led to Cyrus identifying as a “teen idol”. Cyrus also became the first person within The Walt Disney Company to have agreements in television, movie, products, and music.

Cyrus signed a recording contract with Hollywood Records to distribute her soundtrack music. In 2008 Cyrus went on to release her second studio album, Breakout (2008), which ranked third in the U.S billboard.

In 2009, Miley released Party in the U.S.A, which went on to become one of Cyrus’ most successful singles to date. The song is recognized as one of her trademark songs.

Some of her singles are See You Again, He Could Be the One, We Can’t Stop, Wrecking Ball amongst others.

Міlеу Суruѕ’ nеt wоrth іѕ еѕtіmаtеd tо bе аbоut $250 mіllіоn. Similarly, her husband Liam Hemsworth has a net worth of around $26 million. So, now, Miley Cyrus is the owner of $276 million.

Destiny Hope Cyrus was born November 23, 1992, in Franklin, Tennessee, U.S. and given the nickname Smiley, which changed into Miley while growing up on a farm in the outskirts of Nashville.

Cyrus went to Heritage Elementary School. While acting on Hannah Montana, she enrolled at Options for Youth Charter Schools and studied with a private tutor on set.

Miley Cyrus is very popular in social media and at the same time, also active. She has 78.3 million Instagram followers, 40.8 million Twitter followers, and 44.6 million followers on Facebook.

Taking about Miley Cyrus, she has a body measurement of 34-24-33 inches. Miley has a height of 5 feet 5 inches and weighs around 48 kg.