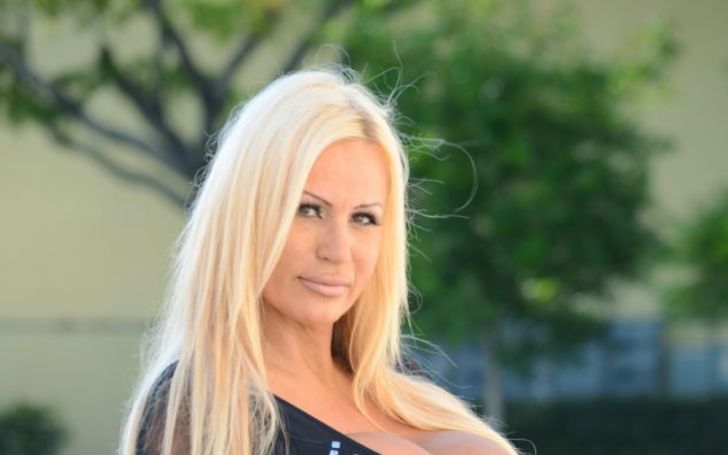 Paula Ann Simonds, popular as Lacey Wildd, is the human version of a Barbie doll after undergoing numerous surgeries. The diva rose to the limelight following her operations and television works.

The 52-year-old lives by the motto, ‘Plastic makes Perfect’ undergoing more than 36 plastic surgery operations. Despite drastic changes already, the model believes that a lot of work is to be done yet and will undergo more surgeries.

With her inspiring surgery journey, she featured in multiple documentaries like Botched and True Life.

Over $250 Thousand on Breast Modifications

The inspiring gorgeous actress spent more than $250 thousand on breast enlargement and modifications. Surprisingly, the actress transformed from A-cup breast to QQQ after 12 successful surgeries.

Each of her breasts weighs about 20 pounds, and she is still raring to go more. Consequently, she faced different physical complications, like ripped muscle and veins. In addition to that, she struggles to sleep as she needs to lie at a thirty-degree angle.

The model holds an ambitious desire of being the woman with the largest bosom and buttocks in the world.

Multiple Surgeries for the Dream of A Human Barbie

In pursuit of her barbie body aspirations, she went through more than 36 cosmetic surgeries to improvise on her scintillating figure. She reshaped her nose, stomach, back, and arms. Furthermore, she received criticism for her extreme changes in her buttocks and legs.

Earlier in 2016, she revealed her desire to own the most extreme body and be a walking cartoon. She was open to working much hard to lose her weight to a size 0.

Wildd appeared in different TV shows throughout her career that reflects on her massive body transformations. She featured in MTV’s True Life, which bagged the Emmy Award for Best Special Class Series.

The actress portrayed herself in 20/20, Double Divas, and ABC News. Moreover, she also owns a few movie credits on her resume in Dr. Ice, Blonde Squad, and Beauty and the Beholder.

The inspiring model worked alongside fellow barbie model, Justin Jedlica in My Strange Addiction on 2014.

Even though she endures immense success on her surgery and acting journey, Lacey Wildd did not share similar luck in her married life. She exchanged her vows for the first time at the tender age of 16. However, things went sour pretty quickly as she finalized her divorce with two children at 21.

The 52-year-old is a mother of six children Ivy, Silas, Tori Glynn, Michael Wildd, Brandon Wildd, and Jenaveve Glynn. Surprisingly, her daughters don’t stand with her on her idea of barbie’s transformation. Sometimes, her kids also appear on her Instagram.

Wildd’s mature daughter, Tori shared her belief that her mother’s desire to be a human barbie is immature in all. However, the dissatisfaction is out of her concerns to her mother since the numerous surgeries caused different health issues.

Besides her much gossiped Barbie doll journey, she performs the service of a professional psychic with the name Ghostbusty. She provides this service from her residence itself at Dania Beach, Florida.

The elegant beauty endured different near-death experiences as a child, which she translates to be the reason for her extraordinary capabilities.