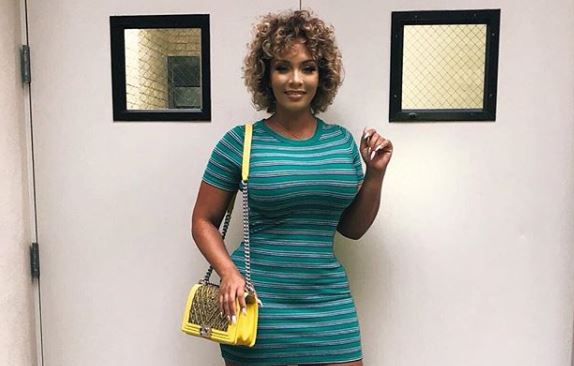 Well, a storm has hit the love of Love & Hip-Hop cast Kimbella Vanderhee. The reality star has no options but to be away from her love of life, Juelz Santana for more than two years. Lately, the sentence of Juelz’ 27 months in prison has messed up their lives. Beforehand, the rapper was arrested on charges of carrying a loaded gun at an airport.

Kimbella has an on and off relationship with her beau Juelz Santana. Any official details of how they began dating are unavailable, but the two has been together for a long time.

Moreover, Kimbella got the chance to appear in the show Love & Hip-Hop due to her rapper boyfriend, Juelz Santana. In November 2018, Juelz proposed to her with a big diamond ring. The couple took over their Instagram to announce their engagement and flaunt the sparkling ring.

However, it seems like Kimbella and her husband-to-be have to wait a little longer to get married. Recently, Juelz was sentenced to 27 months in prison due to the charges he picked up in New Jersey. Even after completing his sentence, he has to be under 12 months of supervision, according to TMZ.

It was back in March when Newark International Airport’s TSA discovered a loaded handgun and eight oxycodone pills in Juelz’s bag. During the standard X-Ray screening, the custom found the illegal items. He ran away right after the incident, but it wasn’t hard for police to find him as he had left his 38 caliber pistol, two bags, and his driver’s license behind.

As of now, Kimbella hasn’t announced her wedding dates yet. Perhaps, after her husband to- complete his trial, the two will marry in a grand ceremony.

Even though Kimbella looks like she is in her mid-20, you won’t believe that she is a mother of three. Together with her fiancé, she has three kids. On September 4, 2002, she gave birth to her first son named Leandro. Later, the duo welcomed LaRon Louis James Jr. and daughter Bella Monroe James.

Like every other parent, Kimbella always keeps her children before anything. No matter how busy she gets, she tries her best to manage time for her kids.

Kimbella started her modeling career in 2003. After modeling for a while, she grabbed her first TV role in the series The Roof as a dancer in 2004. She has featured in the cover of Black Men’s magazines and some popular pages.

However, Kimbella Vanderhee net worth and her fandom raised only after she became part of the VH1’ reality show Love & Hip-Hop: New York in 2001. The series is still going strong since then. In season 7, Kimbella returned as a central member of the cast.

In addition to her acting and modeling ventures, Kimbella is an entrepreneur and fitness enthusiast. She has also grabbed many advertisements as brand ambassadors. But what’s the figure of Kimbella Vanderhee net worth?

Kimbella Vanderhee was born in 1983 in Miami, Florida. As per the sources, her parents had a rough love life. Her father was abusive to her mother. She tried her best to forgive her parents as she grew older. She also has a sister named Lil Kim, who is a DJ.

Her birthday falls on October 13 that makes her age 35. She is of mixed ethnic background. Her father had African-American origin while her mother was Caucasian.

Kimbella has a curvy body with a decent height of 5 feet 5 inches. Moreover, her boy measurement is 36-23-37 inches.