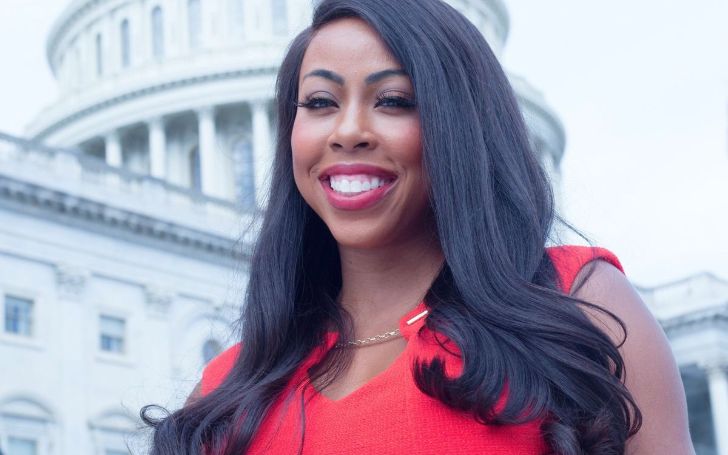 We always provide you with some information about celebrities from various fields. Today, the person is not from the film industry or any business sector but an American politician and a social worker for a long time. Yes, you guessed it right, Kim Klacik who is also a member of the Baltimore County Republican Central Committee. The founder of the non-profit organization ‘Potential Me’ has served as an executive director as well as the organization has helped more than 200 women to gain financial independence.

Kim was born on January 19, 1982, in a place called Accokeek, Maryland, the USA with the birth name of Kimberly Bray. Her parents are James Clinton Bray and Katrina Bray. On February 21, 2019, her father passed away. Besides, she has two siblings, Kyle Bray and Corey Bray.

Kim was from a middle-class family, so, she attended a local community school in her home town. She then went to Bowie State University but couldn’t complete her studies due to her medical condition and bullies. With a goal set in her mind, she then attended the College of Southern Maryland where she studied Hospitality administration and management.

You may be wondering about her relationship status. Let me inform you, Kim Klacik is a married woman. Her husband is Jeffrey Thomas Klacik whom she got engaged in 2010 and married on May 5, 2013.

The couple is blessed with the daughter named Olivia Ann Klacik. Recently, Kim resides in the Middle River,  Baltimore County, Maryland with her small and happy family. Visit her Instagram for more personal info.

Kim Klacik has been successful at her political career being a member of the Baltimore County Republican Central Committee. Lately, she won the Republican nomination in Maryland’s 7th Congressional District special primary election which has made her appearance in the general election on November 3, 2020. With the death of  Elijah Cummings, she tried to place in the position but lost receiving only 25.1% vote. However, with her goal-setting and farsighted vision, she may be a great leader in the near future.

The most controversial search about Kim Klacik is about her campaign ad and the speech she gave to the public. With her ad titled ‘Black Lives Don’t Matter to Democrats’, she raised a lot of questions regarding the rights of blacks and gave a speech mentioning democracy can’t free black lives. She also conceded about the condition of black people as  “Crumbling infrastructure, abandon homes, poverty, and crime.”

The speech has raised some hope for the citizen of Baltimore’s freedom and change on their social and financial status. The politician ended her speech with hatred to democrats saying “All Black lives matter, Baltimore matters, and Black people don’t have to vote Democrats.”

Kim Klacik is a great politician and a social worker with a non-profitable organization. Being the managing partner, she has made handsome money from her family business too. Her net worth is estimated to be around $500k as of 2020.

For more news and updates about your favorite stars, please stay connected with us at The Celebs Closet