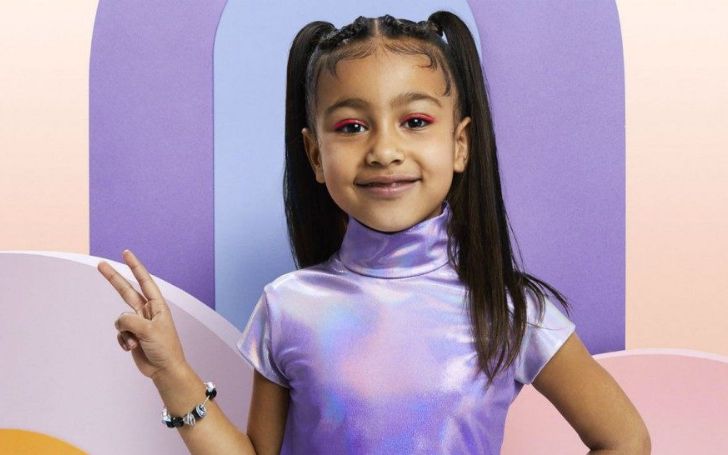 North West scores her first ever magazine cover at the age of five.

North West, the eldest daughter of Kayne West and Kim Kardashian appears in a magazine cover of a fashion magazine at the age of five.

North appears on the front cover of a fashion publication WWD Beauty Inc.

My most stylish and beautiful baby girl North shot her 1st cover for @wwd !!!! She loves fashion & beauty and has so much fun doing this! Hair- @chrisappleton1, Eyeliner- @maryphillips, Styling- @kimkardashian 🙋🏻‍♀️ 📷 @jucophoto pic.twitter.com/YU5xh6SNHa

The fashion magazine regards the little fashion diva “the forefront of a generation that is highly connected, engaged with fashion and beauty and individualistic in style”.

North was pictured donning colorful outfits while posing with kid-friendly props like parasols, toys and even bubbles for her first solo appearance on a magazine cover. The stunning makeup and style were carried out by her mother Kim Kardashian West.

Kim couldn’t be more proud. addressing the achievement of her daughter , the proud mom tweeted:

“I’m seriously so proud of my Northie! She picked her looks and eyeliner color and is so involved and loves fashion & beauty so much so she has the best time at her @wwd shoot!”

In August 2017, North appeared alongside her mother Kim Kardashian West,  on a journey to the past for Interview magazine‘s September seemingly vintage cover story.

Almost a year later, the little girl accompanied the KKW Beauty mogul and grandmother Kris Jenner to front Fendi’s #MeandMyPeekaboo campaign in honor of the 10th-anniversary launch of the brand’s iconic Peekaboo bag, posing in candid and spontaneous shots taken in Los Angeles.

Two months later in September 2018, North walked the catwalk for the first time appearing as Thrilla during the L.O.L. Surprise Fashion Show in Pacific Palisades, California.

West and Kardashian are also parents to son Saint West, 3, and youngest daughter Chicago West,1 while they are expecting their fourth child through surrogacy.