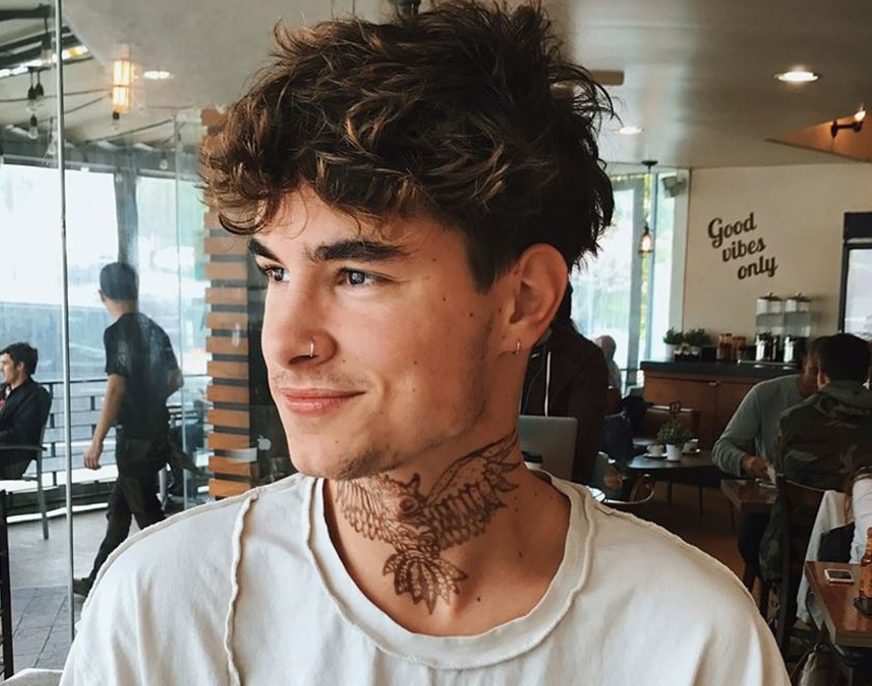 The most prominent social media platform for gaining fame is YouTube in the 21st century. Stars like Justin Bieber, PewDIePie, Jake Paul, King Bach all started out from YouTube, and now they have become celebrities.

Likewise, Kian Lawley is one of the YouTube sensations, who has been rising at present. He is a YouTuber and has successfully made a name for himself in social media platform. Lawley creates different kinds of contents and never fails to entertain his viewers. He is always open and interactive with his fans; that’s why he has a huge fanbase.

Keeping YouTube career on the side, who is Kian Lawley’ dating? Is he single? Let’s find out his dating affairs, girlfriend, career, net worth, parents, and wiki-bio!

Back in 2011, Kian Lawley was rumored dating Jenn McAllister. The rumors swirled around when he tweeted I Love You to her in his Twitter account in August 2011. The two went out for a couple of years and then broke up.

According to rumors, Jenn’s friend, Andrea Russett was responsible for their breakup. Andrea Russett is also an actor and YouTuber like her. After Kian met Andrea, they started hanging out. They also did a lot of collaborative videos on their channel. The duo began dating each other back in 2013 and decided to go separate ways in June 2014.

Fans came to know about their break up through her social media. She made a public announcement on Twitter that the pair were no longer together. The fans were devastated to hear the news, but they were happy to know that they were still friends.

Following the break up with Andrea, Kian started hooking up with Alexandria Schneck. She posted a screenshot of her messages with him in which he complimented her tattoos. After that, she posted a picture of them together lying in bed on her snapchat.

It wasn’t confirmed what happened between Kian and Alexandria, but the two suddenly stopped seeing each other. In late 2016, Kian started dating model, Meredith Mickelson. Their relationship with each other wasn’t confirmed until her sister went on social media to talk about how her sister was a better girlfriend to him than Andrea.

Before Kian, Meredith was in a relationship with Ethan Dolan. Kian and Meredith started dating in 2016. Their relationship was criticized as she was underage. In October, she posted a photo of them kissing in New York City.

In April 2017, the couple decided to call it quits and went their separate ways. The two hasn’t been in touch since then.

everyday is all about u, but today is a little bit more special. happy birthday love x

Woodruff is an HR Generalist and is also a YouTuber, who’s worked under Logan Paul. Hence, she has amassed a whopping $500 thousand as her net worth.

Being a Youtuber is like a profession nowadays. Some of the YouTuber make a living out of it. The more views you get, the more you earn. Kian is also pretty popular in the YouTube community. He gets a lot of views in his videos, so that means, he has a pretty good net worth.

forget what i was doing here exactly, but i went scuba diving in hawaii. one of the greatest experiences of my life 🐠✨

Knowing his popularity in the YouTube community, it seems she does make a right amount of money. Kian Lawley’s net worth as of 2018, is $2 million. His YouTube channel is still growing so his net worth will increase next year.

Kian Lawley first created his YouTube channel in 2010, and he went by the name of superkian13. He was also a part of a lot of collaborative channels like kiansam13, Our2ndLife, and KianAndJc. The channel KianAndJc has over 3 million subscribers.

In 2015, Lawley starred in his first film named The Chosen. Because of his success, he won the award for Choice YouTuber at the 2015 Teen Choice Awards. Some of the other projects that he’s been involved include Shovel Buddies, Boo! A Madea Halloween, and H8ters. He also won an award for Choice Movie Actor for the movie Before I Fall.

Kian Robert Lawly is an actor and Youtuber. He is mostly known as Kian Lawley. He was born on September 2, 1995, in Sioux City, Iowa. Lawley is an American, and he belongs to the white ethnicity. Lawley gained his education at San Clemente High School. He has two brothers and two sisters. His zodiac sign is Virgo.

Kian Lawley’s age is 23. He has a very athletic body. His height is 6 feet 1 inch, and he weighs about 76 kg. He has dark brown hair and dark brown eyes.