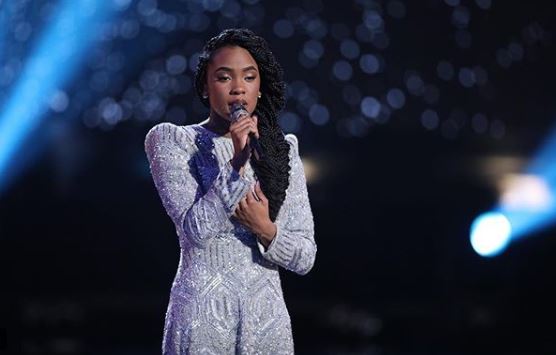 Kennedy Holmes is a 13-year-old American soul singer, who is currently competing in the season 15 of NBC’s The Voice. The Florissant teen has been wowing judges since her audition where she performed Adele’s ‘Turning Tables‘ and compelled all the judges – Jennifer Hudson, Blake Shelton, Kelly Clarkson, and Adam Levine to turn around; all thanks to her mesmerizing voice. All the judges wanted her to join them, but she chose Jennifer as her mentor.

Kennedy has already earned a spot in the top 13, and it looks like she has booked her inevitable place in the top 11 as well. During top 13 Live performance on Monday night, she delivered the best-yet voice and once again, amazed all the judges.

Also, see: Who is The Voice Season 15 Winner Chevel Shepherd?

Kennedy showed off her skills with Bette Midler’s ‘Wind Beneath My Wings,‘ which she chose as part of the evening’s theme, dedicating to her parents who sacrificed a lot to get her where she is.

Kennedy had started dancing at the age of 10. Dance helped her feel comfortable with being on stage. Her first ever musical performance was a cover of her now-mentor Jennifer Hudson’s “I am Changing.” She enjoys playing volleyball and running track. She is the youngest singer in this year’s The Voice competition.

At the age of 10, Kennedy made her professional debut as Little Inez in a production of “Hairspray” at an outdoor theater in St. Louis named, “The Muny.” It was Kennedy’s mother who inspired her to audition for her first performance. According to her mother, Kennedy started singing when she began to talk.

On 4th July last year, Kennedy performed the national anthem before a St. Louis Cardinals game. She once considered dancing as a career path, but now, she prefers singing. She takes dance as an advantage for a performer.

When asked about trying out for The Voice at such a young age, Kennedy replied:

“Why not? It could jump-start my career at a young age. I can learn from all the adults in the competition because they are all amazing.”

Kennedy Holmes was born in 2004 in Florissant, Missouri. She celebrates her birthday on 7th December that makes her current age 13. Moreover, her zodiac sign is Sagittarius.

Kennedy was born to parents- Shawn and Karen Holmes. According to her mother, she began singing at the age of two. Her parents are very supportive of her singing career and inspire her to do more better. She has an older brother named, Jordan Bow.

Kennedy currently studies at eighth grade in John Burroughs School. She feels important to balance her school life and career.

Kennedy has decent height, considering her age. However, the measurement of Kennedy’s height is still unknown.