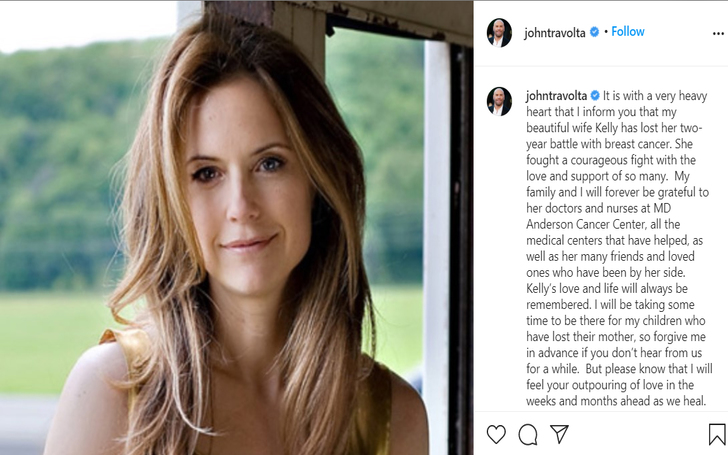 Actress Kelly Preston is sadly no more as she died from breast cancer on 12th July.

Hollywood is taken by a surprise from learning the death news of actress Kelly Kamalelehua Smith – known by her stage name Kelly Preston, who was battling breast cancer for the last two years.

Preston who was only 57 when she took her last breath on 12th July was pronounced dead by her family members to reliable Hollywood news media, People.

According to the information obtained by the news source, Preston had been undergoing medical treatment secretly and wanted to keep her health condition an intimate matter between herself and her close ones.

“On the morning of July 12, 2020, Kelly Preston, adored wife and mother, passed away following a two-year battle with breast cancer,” wrote the source.

Travolta with whom the actress was married for nearly thirty years and worked together on movies that include Battlefield Earth and Gotti also took to his official Instagram account to make the announcement of the heartbreaking news.

Speaking of his beloved wife, Travolta said, “My beautiful wife Kelly has lost her two-year battle with breast cancer. She fought a courageous fight with the love and support of so many,”

Travolta also further announced that he was taking some time to take care of his children and concluded with, “But please know that I will feel your outpouring of love in the weeks and months ahead as we heal,”

Daughter Ella too paid a tribute on Instagram where she described her mother as the most loving, strong, and bright soul.