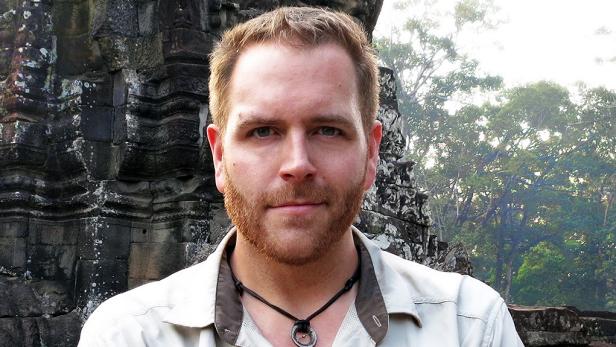 Josh Gates is an explorer and an adventurer with a highly curious mind. He documented his discoveries and shared it with the rest of the world. He gained recognition from Destination Truth that aired on the Syfy Channel from 2007 to 2012 after five seasons, each with 11 episodes.

Josh is also the co-executive producer and presenter of the Travel Channel series Expedition Unknown. He has also written a book, Destination Truth: Memoirs of a Monster Hunter, which was published in the year 2011 by Simon and Schuster/ Gallery Books.

Besides his professional career, Josh also has a successful love life with his wife. So, who is Josh Gates’ wife? Also, know the details about Josh Gates’ son including his family details. What’s the figure of Josh Gates’ net worth?

Josh Gates is in a blissful married relationship with his girlfriend turned wife, Hallie Gnatovich, since 13th September 2014. The intimate wedding ceremony was held at the Hidden Pond Luxury Resort in Kennebunkport, York, Maine in the attendance of their family and close friends.

Happy birthday to @halliegnatovichgates. Wife. Mother. Water-gun warrior. Here's to our next #adventure!

Josh Gates’ wife, Hallie, was the part of the production crew on Destination Truth. She also was on the show from season 2 and appeared till the end of the season. Initially, Gates’ spouse, Hallie, worked with him as a researcher behind the camera. But as time went, his spouse began to star with Josh on screen as her partner’s co-star.

“Here, you leave today and enter the world of yesterday, tomorrow, and fantasy.” A snapshot of one of my happiest moments as a father: watching Owen sprints into @disneyland in search of adventure.

Similarly, Josh shared the news of his marriage among his fans by posting on his Facebook as well as the Twitter page. The couple has a son, Owen Gates, who was born on 12th February 2016.

In the year 2017, the couple announced that they were expecting a daughter in February 2018. While neither of them has disclosed the child’s birth, the duo has referenced in posts on the social media that they have a daughter, Isla Gates.

In one of the episodes of Destination Truth, Gates’ spouse gave her the news about her pregnancy via satellite phone. This could be one of the interesting episodes of the show.

The husband-wife pair is together for years and is still free from any kinds of divorce rumors.

Josh Gates began his career as an explorer and climbed Mt. Kilimanjaro and Mt. Aconcagua. He is also a SCUBA diver and has worked with many researchers at the University of Maryland’s archaeological excavations.

Josh has traveled to more than a hundred countries and also included in The Explorers Club. He even rose to fame as a successful television host.

Furthermore, Gates is famous for his show Destination Truth on Syfy. His show Expedition Unknown was premiered on January 2015.

Moreover, Josh wrote a book titled Destination Truth: Memoirs of a Monster Hunter. The book is currently sold at Amazon for around $8.86 for Kindle version while for Paperback versions, it costs around $9.33.

Apart from that, he also took part in various shows like Beg, Borrow & Deal, Truly Famous, and hosted Ghost Hunters.

Being a famous TV host, he earns a massive amount of money from his profession. But what’s the figure of Josh Gates’ net worth?

As of 2019, Josh Gates’ net worth is estimated at around $3 million. The star makes the money from his exploring career. He makes an annual salary of $100 thousand, a monthly salary of $8,000 and a weekly income of $2,000. Moreover, his 2011 published book, Destination Truth: Memoirs of a Monster Hunter costs $11.99 in Kindle and $16 on Paperback editions.

In contrast to his net worth, his wife, Hallie Gnatovich has a fortune of around $1.3 million. HIs partner earned her worth from her career as a therapist and also as a researcher for her husband Josh’s show, Destination Truth.

Josh was born in the year 1977 in Manchester-by-the-Sea, Massachusetts, United States. His birthday falls on 10th August, which makes his age 41. He stands with a height of 6 feet 2 inches.

Just another day at the office. And by office, I mean first-century, pitch-black, spider-infested tunnels beneath an ancient city. #ExpeditionUnknown @discovery #newadventures (photo by @stonefilmsearth)

Josh is an adventurer and traveler who got the desire for exploring from his father who was a deep sea diver. His mom’s family was in the UK, so he along with his parents used to visit there when he was a kid.

Moreover, Josh grew up watching his father traveling to different places in the world. With all these experiences, it played a vital role in his passion for exploration.

You Might Like: Is Abigail Spencer Dating After Split with Ex-Husband Andrew Pruett? Also know their Love History!

Josh attended the University of Maryland’s team that performed the archaeological excavations of Caesarea Maritima in Isreal from the year 1996 to 1998. He finished his graduation in archaeology and drama from Boston’s Tufts University.

Regarding his family life, Gates is currently living a blissful life with his family including his wife and children. Besides, the star has over 133k followers on his Instagram account where he posts mostly about his work.