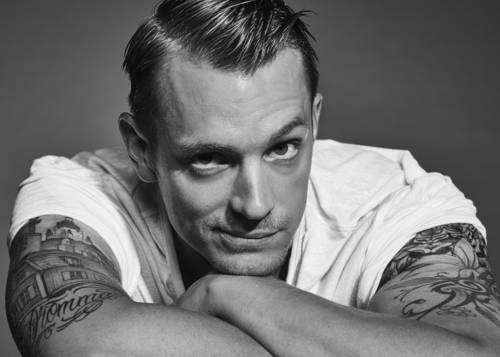 Acting is not just standing in front of a camera and doing what the director tells you to do. It’s about understanding the character that you’re playing and putting your emotion into it to connect with the audience.

Talking about Joel Kinnaman marital status, he is now a married man. Yes, he has already been hitched to his longtime girlfriend. Joel Kinnaman married a Swedish tattoo artist, Cleo Wattenstrom in 2016.

Joel Kinnaman started dating Wattenstrom in 2014. The world came to know about their dating affair when US Weekly spotted them together in producer Jennifer Klein’s holiday party. Many superstars attended the party including Kerry Washington, Leslie Mann just to name a few.

Unfortunately for the duo, the news broke out, and their affair went public. After that, the RoboCop actor and his girlfriend started to live together. After two long years of dating, the couple decided to take their relationship to the next level by getting married. For their marriage, they chose not to do it big and did it in a private ceremony. Nobody knew that they were married, but in April 2016, Joel officially announced that he was a married man on the talk show with Aisha Tyler. He said:

“I’m a romantic guy. I took her to this very romantic place on San Vicente Boulevard called Same Day Marriage. That was it. This little Russian lady sitting inside there, she was like, ‘Do you want to get married? $435, quick’.”

‘We both said yes, and the simple wedding ceremony went on and that was the end of it.’

The couple is currently residing in California. You can also find some cute pictures of him and his wife on his Instagram account. They are yet to be parents; Joel Kinnaman’s wife, Cleo has not been pregnant with a child yet.

Before his relationship with Cleo, he was dating Jane Timglas in 2011. After the two broke up, he started dating American actress Olivia Munn in 2012, but their relationship ended after two years in 2014.

Joel Kinnaman has played a lot of roles in a lot of different movies. Some of the films that he has been a part of has achieved tremendous success. It won’t surprise people if he has a huge net worth.

Caption: Joel and his beautiful wife, Cleo on the red carpet of Emmy.

Joel Kinnaman has a reported net worth of $6 million. He continues to take part in a lot of projects so his net worth will inevitably increase in the future.

In 1990, Joel Kinnaman kicked off his career when he got the opportunity to play in the Swedish TV series “Storstad.” He stepped foot in the movie industry from 2002. His extraordinary talent was recognized by a lot of people who gave him the opportunity to appear in a lot of movies. Some of his successful films include The Robocop, The Killing, and Easy Money. For the film Easy Money, he also won the Guldbagge Award for the BEasy Money, and also won the Guldbagge Award for the Best Actor.

In 2012 and 2013, Joel Kinnaman made appearances in Easy Money II and Easy Money III respectively. In 2014, he got the opportunity to play the lead role in “Robocop.”

The actor has also appeared in different TV series. He appeared in Swedish TV series “Andra Avenyn.” He is now a part of the series “The Killing.”

Charles Joel Nordström Kinnaman was born on 25 November 1979, in Stockholm, Sweden to Steve Kinnaman and Bitte Kinnaman. He is commonly known as Joel Kinnaman. He has both Swedish and American citizenship as his mother is Swedish and father an American. Kinnaman has five sisters. For education, he went to Swedish Academic School of Drama in Malmö.

Joel Kinnaman is a Swedish-American and belongs to mixed ethnicity (German, English, Scottish). His Zodiac Sign is Saggitarius. Kinnaman has a towering height of 6 feet 2 inches, and he weighs about 89 kg. He has a very athletic body with brown hair and green eyes. To stay connected to his fans, he uses social media like Twitter and Instagram.