Who is Jessica Simpson’s Husband? Know Her Wiki-Bio Including Her Age, Net Worth, Career, Married Life, and More! 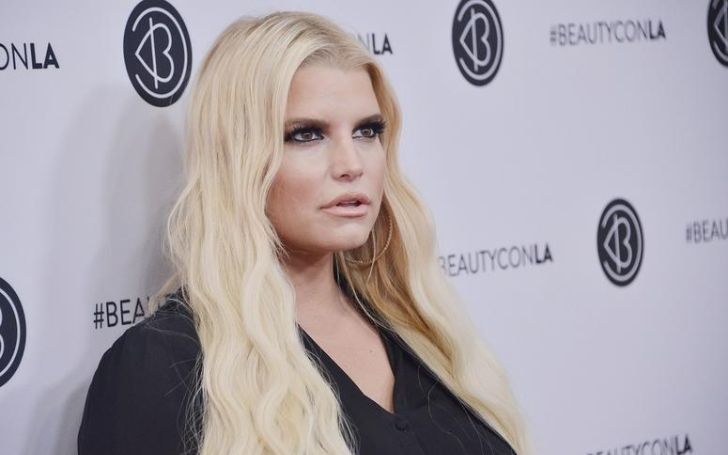 It is said that a princess has to kiss a lot of frogs before she can finally find her prince charming. This rings true for most cases involving a really beautiful girl as there are quite a lot of men after her.

Beauty attracts a man towards a woman like a flower attracts bees and if a girl is as beautiful Jessica Simpson then its no surprise seeing the number of men that were after her. She is a singer and an actress and she has had her share of flings before she finally found her true love and settled down with him.

Jessica Simpson is currently married to ex-NFL tight end, Eric Maxwell Johnson. He was born on September 15, 1979, in Needham, Massachusetts. The couple first started dating in May 2010 and are going great for the lovebirds.

Two years after their relationship, they announced the birth of their first child, Maxwell Drew Johnson. Jessica announced she was pregnant with the couple’second child in the same year, and on June 30, 2013, Jessica gave birth to a baby boy.

The couple named him Ace Knute Johnson. They were yet to marry during the time they had both kids and on July 5, 2014, the pair eventually tied the knot at a ceremony held in California.

Recently, Jessica Simpson again got pregnant with her third child with husband Eric. The pair announced their pregnancy in September 2018 and stated that they were expecting a baby girl.

❄️Snow Day at the Johnson’s❄️ Creating traditions and making memories!! I love the holidays!!!

Even after two children and pregnancies, Jessica Simpson has not habituated with pregnancy. Recently, she posted a picture of her holding her toilet seat as she broke off the seat trying to get too comfortable. She has posted such other instances on her socials as well.

But prior to her marriage, Jessica Simpson married American actor, singer and reality star, Nick Lachey, husband of Vanessa Lachey, from 2002 to 2005. She did the reality show Newlywed: Nick and Jessica with Nick Lachey. The duo eventually divorced in 2005 and brought an end to the reality TV show on MTV.

After Nick, she was spotted with the lead singer of the popular Maroon 5 band, Adam Levine between 2004 and 2006. She also dated American musician, songwriter, producer, poet and professional wrestling magnate, Billy Corgan in 2009 and NFL quarterback Tony Romo before that between 2007 to 2009.

The singer also dated the Swedish Model Marcus Schenkenberg in 2007 after breaking up with songwriter John Mayer between 2006 and 2007.  Simpson was linked to the Standup comedian Dane Cook as well in 2006.

Jessica Simpson realized her dream to become a singer when she was only 11 years old. She began by singing in the church choir.

In the year when she hit teenage, she auditioned for the Mickey Mouse Club, where she sang Amazing Grace and danced Ice Ice Baby.

She advanced through various levels winning in all the rounds she competed in, and then became one of the six semi-finalists, going up against the likes of Britney Spears, Christina Aguilera, and Justin Timberlake. The talent hunt became tougher as performances from other contestants were superb.

But Jessica couldn’t continue the show as she claims she got a nervous breakdown after watching Christina Aguilera’s performance. She returned to sing in the church choir after failing to get into the Mickey Mouse Club.

During one of her Church’s service, a gospel label head who was a guest speaker noticed her singing talent. He asked for an audition and young Jessica sang Whitney Houston’s I Will Always Love You and he signed her to his record label.

Jessica then began to audition at various events and sent her unreleased album Jessica to different labels and producers. Her auditions eventually caught the eye of Tommy Mottola, the head of Columbia Records.

Jessica signed for Columbia Records in July 1997. She named her father as her manager and her mother as her stylist after signing the new Label.

Jessicas Simpson’s net worth is a whopping $170 million. In 2016, she sold a majority stake in her booming lifestyle brand, the Jessica Simpson Collection. Forbes reported it was bringing in $1 billion annually.

She also appeared on movies like The Dukes of Hazzard and Employee of the Month which helped her increase her worth.

Also, see: Who is Catherine Bachman married to currently? Kids and career? Know her Net Worth, Earnings, and Wiki!

Her journey to the fame and fortune began with her debut single, I Wanna Love You Forever on September 28, 1999, and it rated platinum for sales. She released her debut album Sweet Kisses on November 23. The album was a success selling over 65 thousand copies in the first week of its release.

The album made it to number 25 on the Billboard 200 chart. It sold 4 million copies globally, with 2 million in the United States alone.

She released her second studio album in May 2001, Irresistible. It didn’t get as many ratings as her first album despite the fact that it sold 127,000 copies in the first week of its release. It almost doubled of what her first album sold in its first week.

More About Her Net Worth

Irresistible ranked number six on the Billboard 200 chart. However, it settled for a gold certification for sales, selling 500,000 copies in total.

Thanks #budgetrentalcar for helping me escape the paparazzi and have some fun with my family! #myfavoritegetaway #roadtrip http://bit.ly/1SFaTPS

Similarly, in 2012, Jessica released a single, Sweetest Sin but the single didn’t generate many audiences. So her dad made a proposal to MTV about starring the newlywed couple in a reality show.

MTV bought the idea of the show and it premiered on August 19, 2003. The show promoted her third studio album and it is her most successful album till date.

Jessica Ann Simpson is the first child of Joseph Simpson and Tina Ann Drew. She was born on the 10th of July 1980, in Abilene, Texas, United States. Her dad was a Baptist minister, and a psychologist and her mum was a hairstylist.

She also had a sister, Ashlee Simpson. Her parents later divorced in 2013 after a long married life from 1978.

My snowflake was so beautiful performing at school today ❄️ #MAXIDREW

Due to the nature of her fathers’ job at the church, Jessica and her family moved around the country a lot. She attended Amelia Middle School in Cincinnati, Ohio. When her family eventually moved back to Texas, she attended J.J. Pearce High School and eventually dropped out, so she could focus more on her singing.