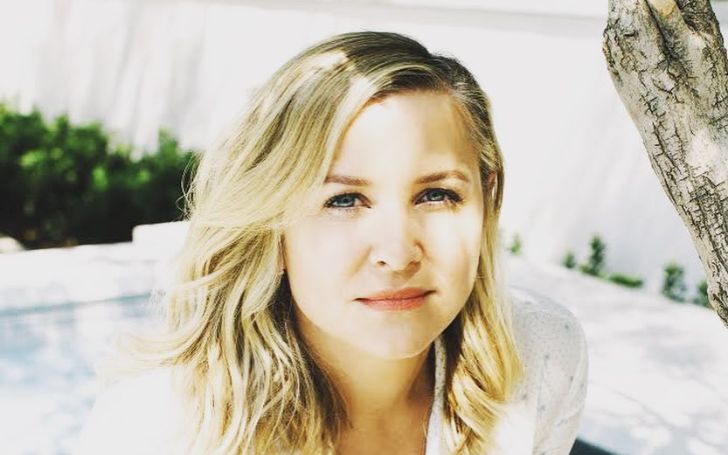 Like mother, like daughter, is the most favorable quote for Jessica Capshaw. She is the child of a retired actress, Kathleen Capshaw Spielberg.

Jessica, like her mother, played in numerous movies and TV series in her career, which made her quite famous in the crowd. Even her father is also involved in filmy sectors and is famous for his great contribution to the movie industry. Well, here are a few things about Jessica you might wanna know about.

We think you guys got it from the heading, Jessica Capshaw is a married woman who tied her knot with the American entrepreneur and author Christopher Gavigan. They took the marital vows on May 22, 2004.

The pair together share four children in which the duo has three daughters and a son in their family. Luke, Poppy, Eve, and Josephine Gavigan are the child of Jessica and Christopher.

If you guys are desperate to know who is the father of Jessica Capshaw, then let us kill your anxiety with the answer to that question. She is the daughter of a famous filmmaker, Steven Spielberg. But, Steven is the step-father of Jessica, as he is the second husband of her mother.

Jessica is the daughter of Kate’s previous marriage with Robert Capshaw. After the legal separation of her parents, Kate married with the renowed filmmaker, Steven Allan Spielberg.

Steven, from his success in the showbiz, accumulated a hefty amount of green piles, and according to Forbes, he earned a massive portfolio of $3.6 billion. So, Jessica’s step-father, Steven, is a billionaire, which also uplifts her net worth.

Most of you might be aware that Spielberg is not only famous for his contribution to the movie industry but also popular for their massive family.

Jessica Capshaw has six siblings in her family. Max Samuel Spielberg is the son of Steven Spielberg from his first marriage with actress Amy Irving. Theo Spielberg is the adopted son who was brought in by Kate Capshaw in the family.

Sasha Rebecca Spielberg, who’s famous for her work in both the music and movie industry, is the step-sister of Jessica, who was born in Los Angeles. Sawyer Avery Spielberg is her fourth sibling and is the co-founder of Where Are They Going company.

Like Theo, Mikaela George Spielberg is the adopted child in the family. She is focused on her study currently. Jessica also has a young sister, Destry Allyn Spielberg, who was born on December 1, 1996.

Net Worth of Jessica Capshaw

If you guys are in this line, then you might already know Jessica Capshaw’s step-father, Steven Spielberg, is one of the wealthiest people in the showbiz. So, she is living a luxurious life. However, she got her image in the show business, which should help her to make a gigantic net worth of $20 million.

Even Jessica’s mother, Kate Capshaw, is a millionaire. So, it isn’t shocking for her to hold those hefty numbers. Except for that, her soulmate, Christopher Gavigan, acquired huge plies from his profession, as an author and entrepreneur.

With those massive portfolios, Capshaw and Gavigan with their four children reside in her family East Hampton estate, which is located in southeastern Suffolk Country.