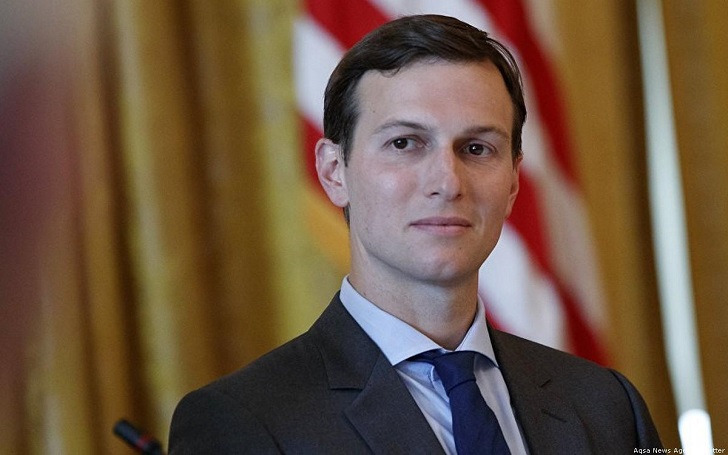 Not everyone kisses the feet of success at a young age, but Jared Kushner did. Jared Kushner is an American investor, real estate developer and newspaper publisher.

Currently, he is also the senior advisor to US President Donald Trump. He is married to Ivanka Trump and has three children. Let us know more about his successful life and interviews.

The married life of Jared Kushner and Ivanka Trump, his family and kids!

Marriage is important in everybody’s life. It is important to choose your partner as you spend the whole life with the person. Jared Kushner decided Ivanka Trump as his better half.

Jared and his wife Ivanka were first introduced to each other by a real estate developer for business purpose, but they ended up falling for each other. Therefore, she describes her first date as

“The best deal we ever made. “

The couple is really liked b the public too. They also have a couple name “Jvanka.” In 2008 Jvanka had broken up for a short time over religion. Later they came together again. Ivanka late on converted herself to Judaism before marrying Jared Kushner.

Ivanka Trump is a businesswoman and the daughter of US President Donald Trump. Jared Kushner and Ivanka Trump had their intimate wedding on 25th October 2009 following their three months of engagement. They threw a grand party and shared their happiness with some 500 guests.
The couple is not only husband and wife but also a father and a mother to three adorable kids.

Jared and Ivanka welcomed their first child Arabella Rose in July 2011. Arabella is currently studying in Jewish Primary Day School in Washington DC. They welcomed their second child, a baby boy in October 2013. He was named Joseph Frederick. She shared happiness through Instagram as well.

During #Passover, we are called upon to reflect on the significance of the exodus from Egypt and to celebrate the great freedoms we enjoy today! #ChagPesach

Then in March 2016, Ivanka gave birth to her third child, a baby boy for the second time and named Theodore James.

The success story of Jared Kushner. His education and career

Jared Kushner has always been hardworking and determined since a very young age. During his college days, he purchased “New York Observer” a weekly New York City newspaper for $10 million that he earned himself. He was of age 25  then.

American real estate investor, Jared Kushner has increased the presence of Kushner Company in New York City real estate market. To add one more plus point to his successful life, on January 9, 2017, he was named The Senior Advisor To President. For his education, he attended the prestigious Harvard College in 1999. He spent a different lifestyle compared to the usual student life. He was more focused towards his business.

By the end of his Harvard life, he earned million dollars buying and selling apartments around Boston. After graduating from Harvard, he got enrolled in joint business and law program at New York University.

Jared Kushner was born to a wealthy Kushner real estate family on 10 January 1981 in New Jersey United States. He achieved name, fame, and success at a very young age. He is 38 years of age at present.

He was born to father Charles Kushner and mother Seryl Kushner. He has three siblings. Jared Kushner got married to Ivanka Trump who is the daughter of US President Donald Trump.

Jared Kushner is The Senior Advisor To President. Donald Trump seems to appreciate the works of Jared Kushner. He also has some posts on twitter praising his works. He also has tagged Jared as “Good Boy” in WSJ  interview.

Jared Kushner did very well yesterday in proving he did not collude with the Russians. Witch Hunt. Next up, 11 year old Barron Trump!

He owns the net worth of $800 million. Jared Kushner is a perfect example of “Hard work pays off good.”