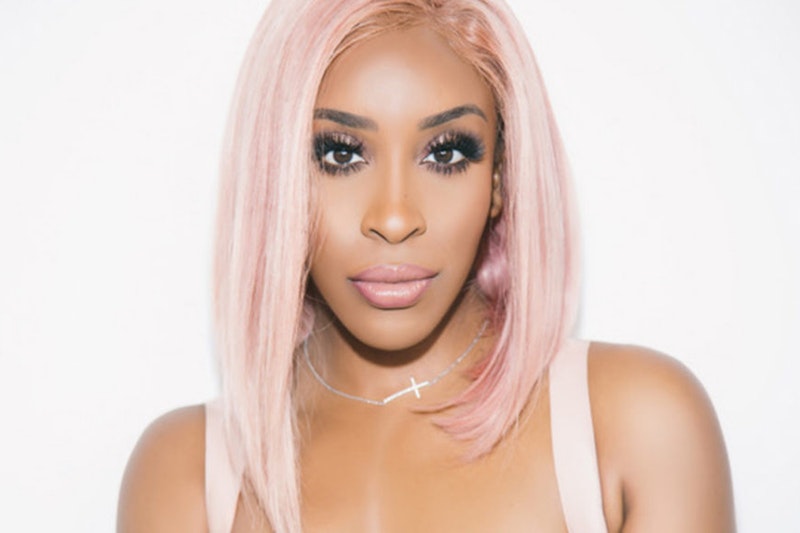 The name Jackie Aina is one of the most popular beauty influencers on the internet due to her expertise in makeup. She is also famous with a nickname, Aunt Jackie, who always fiercely admits the lack of diversity in the beauty industry.

Jackie is a master of beauty and makeup with a working experience of nearly ten years. At this point, many fans want to know about Jackie Aina’ dating affairs and her marital status. So, who is Jackie Aina’ boyfriend?

Who is Jackie Aina’ Boyfriend?

Aina is dating a British entrepreneur, Denis Asamoah. Her boyfriend, whom people know as Mr. Work Smarter, is a business consultant, a motivational speaker, an author, and a productivity coach.

Recommended: Liza Koshy Dating With Youtuber Boyfriend But Are They Married Already Or Just Engaged? Know More of Liza Koshy Wiki and Net Worth

Jackie and her boyfriend have been together for many years. Moreover, Jackie’s social accounts have sufficient images that explain the aura of their romance.

can’t imagine doing this thing called life without you. my favorite part is where we get to travel the world together and do things I never imagined having the privilege to do ❤ #PURXBOXY @boxycharm @purcosmetics 👙swimsuit is @andreaiyamah

It seems like Aina’s relationship with Denis is going to last for a long time. Even Aina’s fans expect them to become man and wife very soon. However, what upsets the fans is that Jackie never says a thing about marrying Denis.

The pair, Jackie Aina and her boyfriend, Denis Asamoah, could have planned their wedding and could get married anytime soon. But unless Jackie herself announces her wedding day, nothing can be said.

Before coming across boyfriend Dennis Asamoah, Jackie Aina was married once when she was in Hawaii. Later, she called it quits with her anonymous husband and left Hawaii with 300 dollars in her pockets.

The actual reason for her divorce with her ex-husband is still out of the reach of the public. Jackie is able to maintain an extreme level of privacy about her estranged husband till date.

when I got married I got a phat ring and was miserable as hell. this is just fine to me! https://t.co/eViAXL9qwT

Caption: Jackie Aina talked about her past marriage with ex-husband.

Maybe she wants to forget her past in order to make her present and future more beautiful. She sold her wedding ring right after their divorce to make a down payment on a car.

How much is Jackie Aina’ Net worth?

From her career in Cosmetology and beauty blogging, Jackie Aina earns a reasonable net worth. As a popular YouTube star, she makes videos for her 2.8 million subscribers.

Her YouTubes videos have already attracted over 226.7 million views. So, there is no denying that she makes a huge income from her YouTube channel.

Moreover, Jackie is also an Instagram sensation with over 1.1 million followers. Hence, Jackie Aina’ net worth is worth looking out for.

Overall, Jackie has earned a total of around $3.2 million from just her YouTube Channel making an average of $3.9k per video.

For now, Jackie Aina’s net worth is under review. However, some unreliable sites suggest her net worth to be around $350k, which is not quite believable.

Nevertheless, we will update on Jackie Aina’ net worth once it’s reviewed. Stay with us!

Before becoming a beauty influencer, Jackie Aina was a full-time member of the Army Reserves. The professional Cosmetologist, Aina, created an empire of cosmetics and is spectacularly connecting with people after forming a YouTube channel by her name. In the spectrum of fashion and glamour, the name ‘Jackie Aina’ itself is a prolific brand.

Jackie Aina owns her own YouTube channel after herself which has more than 2.7 million followers which is equal to that of Sierra Furtado. In this channel, she uploads new videos every Tuesday, Friday, and Saturday. Before this, she worked with MAC and Bobbi Brown cosmetics and freelance makeup artist.

Recently, on December 4th, Jackie Aina shared her morning routine of what she does to look so beautiful with Elle. There she shares some of her morning beauty tips to the Elle Magazine‘s Waking up With series. As a matter of fact, she is a “wig warrior.”

Jackie Aina was born as Jacquelyn Lonje Olayiwola Oyeshola Bolayemi Aina on 4 August 1987 in the U.S. Hence, his current age is 31. As she was born to Nigerian-American parents, Jackie holds American citizenship and is of Afro-American ethnicity

Also see: Yvonne Orji Finally Found The Man of Her Life: Who is Her Boyfriend?

Out of her six siblings, her two sisters’ names are Toyin and Folake. She is a good friend of Alisha Ashely in real life. As far as her health is concerned, Jackie has hyperhidrosis which is a genetic condition of excessive sweating in certain parts of the body.

The exact height and weight of Jackie are unknown, however, she is a tall woman with a perfect figure. Regarding her fame in the social media, she is active on various platforms like Twitter with 378k followers and Instagram with 1.1 million followers.