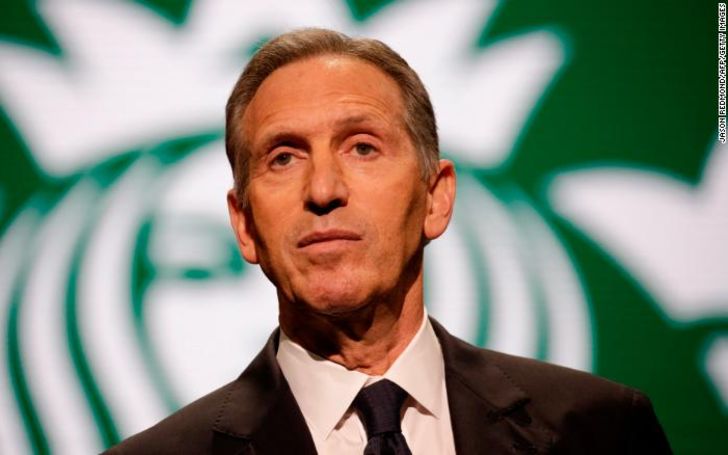 If you have not heard the name of Howard Schultz, then you are probably living under a rock. He is an American businessman and former CEO of American coffee and coffeehouse chain company Starbucks. Plus, he is also a billionaire.

The businessman, Howard Schultz is currently one of the hot topics in the media for his participation in the American Presidential Election in 2020. So, what is he planning to do? let’s find it out along with several other facts including his net worth, family, and wiki-bio.

How Much Is Howard Schultz’s Net Worth?

Howard Schultz is a very rich man. In fact, he is one of the richest men in America. As of 2019, the businessman possesses a mammoth net worth of $3.5 billion.

All his enormous wealth is thanks to his very successful career as a businessman. During his spell at the Starbucks, he succeeded very admirably as the Chief. Moreover, Schultz expanded Starbucks from 11 stores to more than 28,000 worldwide and made it a social hub for many Americans.

According to the Forbes list of 2018, Schultz ranked as the 280th richest person of the United States with a net worth of $2.9 billion. In contrast, today, his net worth increased to $3.5 billion. Furthermore, he is also one of the richest people running for the US Presidential Election 2020.

In 1996, Howard Schultz and his spouse co-founded the Schultz Family Foundation, which currently supports two national initiatives. Onward Youth aimed at promoting employment for young people between the ages of 16 and 24 who are not in school and without employment.

Humbled to serve lunch and spend time at Mary's Place. @sherikschultz and I are in awe of the invaluable work they do in providing women experiencing homelessness a safe place to rest, build community, and find the resources they need to reclaim their lives. We met women with incredible courage and strength. A special thank you to Mary’s Place director Marty Hartman and to all the amazing volunteers!

In the same way, Onward Veterans supports post-9/11 military veterans to successfully transition to civilian life. He has donated millions of dollars in the foundation which supports and trains veterans and youths.

Howard Schultz became a hot topic after he announced he would run for the Presidential Elections 2020. On January 27, 2019, he declared in an interview that he was exploring a run for president as an independent and that he considered running as a centrist.

He criticized both the Democrats and The Rebulicans stating the government as the main culprit for the nation’s huge debt. He later stated in a video he uploaded in his Twitter:

Schultz spent his first interviews attacking Democrats, describing the proposals of Alexandria Ocasio-Cortez, Elizabeth Warren and Kamala Harris as “extreme”, “punitive” and “not American”. He further blasted Democrats and described Harris as “shrill” and Warren as “Fauxcahontas” was “thoughtful analysis” in his tweets. However, he later deleted the tweet.

Howard Schultz is a married man. His wife is Sheri Kersch. The couple exchanged vows in 1982.

Other than that, he does not seem to have had relationships with any other person. Furthermore, Schultz is living a contented and prosperous life with his family and there appears no conflict and rumors of separation among the duo.

Howard Schultz was born on July 19, 1953, in Brooklyn, New York, United States. He is 65 years of age as of 2019. His mother is Elaine (Lederman) Schultz and father Fred Schultz. Likewise, his father was a former US Army veteran and later a truck driver.

He grew up with his younger sister, Ronnie, and brother, Michael, in the Canarsie Bayview Houses of the New York City Housing Authority. As Schultz’s family was financially weak, he saw an escape in sports such as baseball, football, and basketball, as well as the Boys Club.

Howard studied in Canarsie High School, from which he graduated in 1971. Schultz received an athletic scholarship at Northern Michigan University, but there, he chose against playing sports.

At the same time, he became the first person in his family to go to college. Moreover, the entrepreneur received his bachelor’s degree in speech communication in 1975.