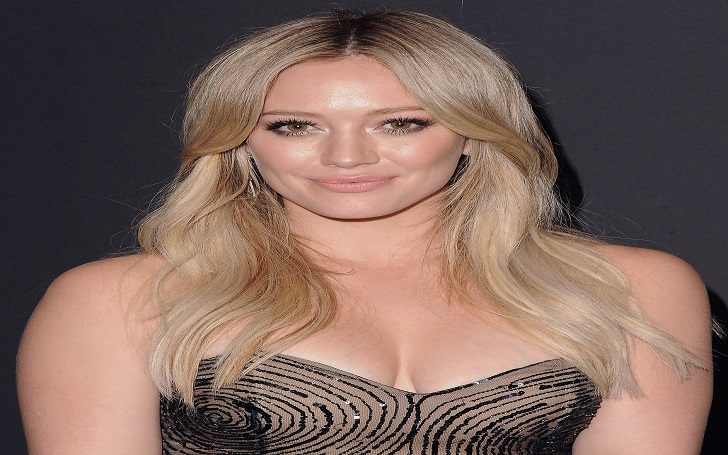 Teen sensation Hilary Duff is an American actress and singer. She came to the entertainment industry while a teen and was titled teen idol after appearing in comedy series of Disney Channel “Lizzie McGuire” (2001-2004) as the title character. All appreciated her work as a teen. She is no more a teen but is active in the industry as always.

Being a celebrity no wonder her life is always under a microscope. Her dating and divorce have hit the media. There are many rumors and controversy regarding her personal life especially her dating, boyfriend, divorce, and ex-husband. Let us look for more details.

Dating Ely Sandvik, yet there are rumors about her spending alone time with ex-husband!

The couple was recently seen together having a good and lovey-dovey time in Los Angeles. The couple has shown the love in the air scene since summer this year.

Hilary Duff had already been married to professional hockey player Mike Comrie in 2010 before dating with her new boyfriend. Her past married life was quite unsuccessful as it ended in a divorce. The couple got divorced in 2016 and even have a 5-year-old son, Luca. They quite often spend time together with their son as they co-parent. Luca is also very famous in his mom’s Instagram.

We are so proud of this boy!

But recent news says Hilary Duff and Mike Comrie were seen out for lunch without son Luca.

This created rumor, people thought they were giving a hint of getting back together, but it was clear that Hilary Duff got her man, Ely Sandvik.

Hilary Duff has also had relationships with producer Matthew Koma which lasted for around one month. Duff also had previously dated fitness trainer Jason Walsh, but that relationship also did not last long and ended with a break-up.

UPDATED – she started a relationship with a new boyfriend Matthew Koma in 2017. In October 2018, the couple welcomed their first child, a daughter.

Let us become acquainted with Hilary Duff through her short bio:

Hilary Duff was born Hilary Erhard Duff on September 28, 1987, in Houston, Texas to mother Susan Duff a film producer and father Bob Duff who owns a chain of convenience stores in Houston, Texas. Her elder sister Haylie Duff is also an actress and a singer.

Hilary Duff is famous as an actress and a singer. Duff has been active in the Hollywood industry for over a decade and still is active. Hilary started her career being part of T.V. commercials and also modeled for clothing brands. The talented actress also played minor roles in series like “True Women” (1997) and “Playing by Heart” (1998).

But life always has ups and downs; she was dropped from the cast of “Daddio” (2000)  before its airing. Hilary was claimed “Teenager of the Year” in 2003 by Rolling Stone. Duff was also ranked number one on the list of “Hottest Teen Female Star” the same year.

That was in light of her acting, singing, open appearances, and charity work. Duff also was named one of People’s 50 Most Beautiful People in 2005. Hilary Duff was inspired by her sister’s performances for singing. Hilary recorded her single “Why Not” in January 2005.

This beautiful actress of age 29 stands 5’2″  feet tall. She pulls off any dresses so well but is usually seen in extra size clothes. Also, her photos in a bikini are extremely hot.

Hilary Duff has quite a good amount of followers on Instagram as well. She also makes sure to update her fans and followers about her activities through her posts on Instagram.

Her posts on Instagram makes it clear that she is a fun loving person and spends a lavish lifestyle. Why not, after all, her salary must be pretty good. She owns the net worth of $25 million.