American Football Coach Herman Edwards Married Life With Wife is Blissful, Followed By His Past Divorce! Know His Stats, Salary And Net Worth 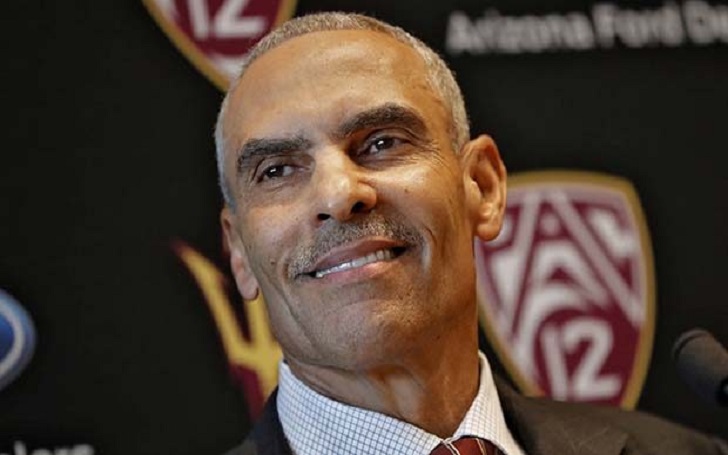 If you are fond of football, then you might know this hot topic of American Football, Arizona State Sun Devil’s Football team has hired a head coach recently. Yes, that’s right, Sun Devil’s team just hired a talented and motivational coach on the football field, Herm Edwards.

Herm Edwards is also a professional football analyst in ESPN and former National Football League (NFL) player and coach. He is also known for his motivational speaking which led to the publication of his book of quotes.

Besides his football career, let’s talk about Herm Edwards’ personal life; who is Herm Edwards’ wife? How is their relationship? Let’s known more about him.

Who Is Herman Edwards Wife?

“A woman’s hand is behind every successful man’s life.” Herm Edwards wife is undoubtedly resembling the quote, but who is Herm Edward’ wife? And how did Herm meet his wife?

Herm Edward’ wife name is Lia Camara. Herm Edward and his wife Lia Camara both met on a plane in 1994, while Herm was an assistant coach for the Chiefs, while Lia Edwards worked for the NCAA in sports management.

After dating for a long time Herm Edward and his wife Lia Camara finally tied their knot in 2000. Herm Edwards wedding ceremony was kept private, and only friends and family members attended their wedding.

Herm’s wife gave birth to two children, both daughter Gabrielle and Vivian. As Herman says, he has been blessed wife like Lia. Herm Edwards told a reporter that his wife is always upbeat, positive, and always reminds Edwards, he is a good coach and never let him forget it.

With their love relationship, Edwards wife had to face disease. In the early 20’s, she battled with diabetes which caused a miscarriage led to complicated pregnancies.

Because of Herman Edwards’s wife’s type 1 diabetes, the pair lost two children before she got Gabrielle and Vivian. Events occurred in the bond of Edwards, and his wife has made their relationship grow more strong as the pair seems to be understanding each other and are always seen romantically close. Beside their chemistry, does Herman Edwards have other children? If yes; Who is his child’s mother?

Before tangling in love with wife Lia Camara, he had been married to someone else and got divorced. Edwards and his ex-wife also had a baby boy, Marcus.

But the question remains who Herman Edwards first wife was? Herman hasn’t revealed any information regarding his first wife and son Marcus in public, but we assure that his son Marcus is also in the footstep of his father. We will post detail as soon as he reveals it. Stay tuned.

Born in 1954, Herman Edwards celebrates his birthday on 27th of April. According to his wiki, he is at the age of 63 and born in the family of father Master Sergeant Herman Edwards Sr. and mother, Martha Edwards. He grew up in Seaside, California and attended Monterey High School.

Besides his football career, Herman Edwards is also famous for his quotes, soundbites, and a motivational speech given in press conferences. For the gameday, his fans have dubbed soundtrack as “Hermisms.” His message “You play to win the game!” during New York Jets Press Conference has become the title of book and collection of “leadership lessons” for the booklover to use as personal motivation. As of motivational speaking, Edwards’ reputation has led to the publication of his book of quotes.

After getting the job of a Head coach, Herman Edwards and Arizona State Sun Devil Football team haven’t shared any contract detail and salary to the media. They haven’t released any buyout term from both sides. We will update you as soon as this information is public.

As a professional football coach, Herman Edwards has earned a good amount of money. As of 2018, Herman Edwards has an estimated net worth of $8 million. We hope his Head coaching career in Arizona State Sun Devil football team be as good as his quote and motivational speech in his press conferences.