Harry Maguire: Engaged To His Longtime Girlfriend: Soon To Marry His Fiancee? 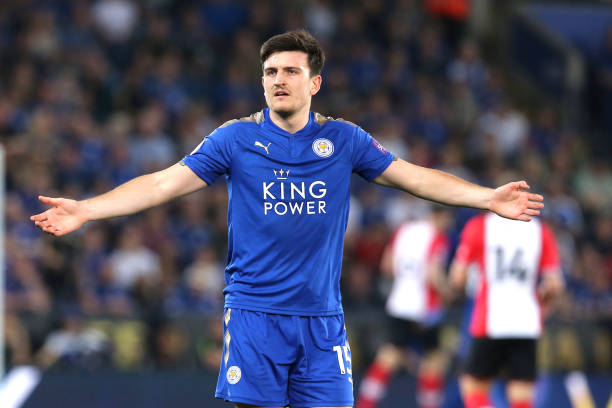 Do you remember the header from an English player in a match against Sweden in FIFA World Cup 2018? The man behind the smooth 30th-minute header is none other than English professional footballer, Harry Maguire. He plays as a center-back for Premier League club, Leicester City. Starting off his career playing for Sheffield United to Hull City to Leicester City; the football player has won hearts of many football fans.

Furthermore, one of his diehard fans even tattooed his face on his chest after his FIFA header. He tweeted about sending him a signed shirt which shows how humble Harry Maguire is to his fans.

The 25 years old Leicester City player, Harry Maguire is not only committed to football but also to his long-run relationship with his girlfriend. He fell for his best friend and stood by her side, isn’t that romantic?

Harry is currently dating his longtime girlfriend, Fern Hawkins. His girlfriend, Fern Hawkins received a first-class graduate degree in science and physiotherapy in 2017. The duo from Sheffield has been dating for over seven years since June 19, 2011. A step above relationship and nearer to marriage, the pair engaged on February 17, 2018.

Read More: Footballer Ross Barkley Has A Blissful Dating Life With Girlfriend, Is He Planning To Get Married With Her?

Harry Maguire girlfriend revealed that he asked her to marry him during a romantic getaway to Paris.

Since they are already engaged, the couple might tie the knot soon. In fact, both are the godparents of Fern’s niece, Florence Fraser. They are so open about their relationship that they never hesitate to showcase their true love in front of others on their social media.

As of now, Harry Maguire and his fiancee are enjoying the bliss of a live-in relationship and resides in London. Once they announce anything regarding their wedding dates, we shall inform you.

Harry Maguire Net worth and Salary

Speaking of Harry Maguire net worth, he plays as a defender for Premier League club, Leicester City as one of the highest paid players of the club. His estimated market value is $9.47 million. He signed a $22.98 million deal contract with Leicester City in 2017 from which he receives a weekly salary of $108,042. Moreover, Harry’s annual salary is more than $6.75 million.

Harry Maguire began his career with Sheffield United FC debuted in April 2011 against Cardiff City. He received Man of the Match Award, but his team was relegated.

At the age of 19, he successfully made his 100th start for the Blades against Leyton Orient. On June 21, 2014, United offered an improved contract to Maguire with $2 million bid from Wolves. On July 29, 2014, Hull City offered him a three-year contract, and his first goal for the team was against Bristol City. He captained Hull City in Premier League match against Middlesbrough when he scored his first Premier League goal.

Harry signed a five-year contract with Leicester City on June 15, 2017, and debuted in a game against Arsenal. Most importantly, he was in the 23-man England national team squad for the 2018 FIFA World Cup. He scored his first England goal with a 30th-minute header from Ashley Young’s cross on 7 July 2018 with a win over Sweden in the quarter-final.

Jacob Harry Maguire was born in 1993, in Sheffield, South Yorkshire. His parents raised him up along with his brothers, Joe Maguire and Laurence Maguire who are also footballers. However, there isn’t adequate information about his parents and family background.

He went to St Mary’s Roman Catholic High School, Chesterfield where he returned to present a signed shirt.

Harry rejoices his birthday on March 5 and his current age is 25. He belongs to Caucasian ethnicity/race.

Harry currently wears jersey no 15 of Leicester City. With a height of 6 feet and 4 inches, Harry has solid physic and charming personality. Moreover, his weight is 100 kg.