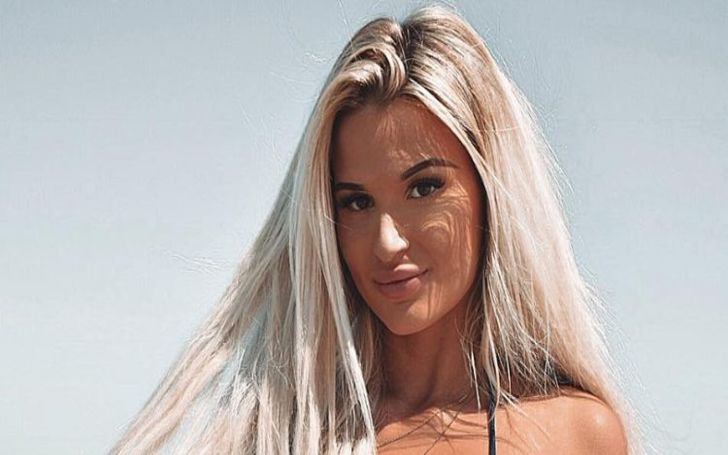 Haley Cureton is a TV personality from Florida who rose to quick fame after making her appearance on the dating reality show, Too Hot To Handle which was dropped by Netflix in April 2020. Cureton shared a bittersweet experience on the program.

But, where is Haley Cureton today? Did she move on from the drama of the show? On the show, she couldn’t share any serious chemistry with her co-star. Or, has the situation changed?

Is Haley Cureton Dating Anyone?

To answer the question, yes Haley Cureton is in a relationship as she is dating boyfriend Colton Snowden who went to the same college as her in Florida. Well, Haley attended the University of North Florida.

Cureton and her boyfriend Snowden, however, met through mutual friends of the TV personality. And, as one thing led another, the two fell in love instantly. Haley isn’t shy to show off her boyfriend to her fans either as she introduced Colton through a YouTube video.

Interestingly, Cureton has also raised a question mark regarding her sexuality to the viewers on Too Hot To Handle where she kissed co-star Francesca Faroga, despite the two claiming they were just friends. She is currently based in LA.

Haley Cureton flaunts a great figure, and by the look of her physique, a lot of the audience of Too Hot To Handle assumed that Cureton might have undergone plastic surgery or a cosmetic procedure. Is it true?

Cureton has been pretty frank to share her beauty secrets and bravely admitted to having undergone plastic surgery and cosmetic procedure with her fans through YouTube videos. In one of her videos, Cureton talked about getting hips injection.

Haley was also outspoken about wanting to undergo a nose job with the prize money from Too Hot To Handle. Sadly, she didn’t win the show. On the other hand, she is yet to share more on her breast augmentation surgery and lips botox.