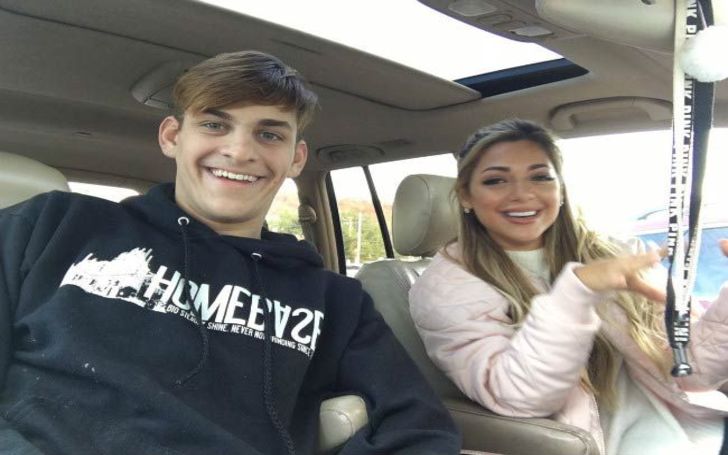 Gabi DeMartino is one of the popular faces in the American YouTube and Vlogging section as she has surpassed more than nine million followers.

DeMartino is also known for resembling Ariana Grande among her viewers or being influenced by the pop star to look like her. Whatsoever, here’s to Gabi and her affair details with boyfriend Collin Vogt.

The beauty Vlogger Gabi DeMartino first met her boyfriend Collin Vogt in summer 2015. DeMartino was dating someone else at the time. But, by July 2015, Collin was able to win Gabi’s hearts.

Not long after their romance blossomed, the love birds confirmed their relationship and came out as a boyfriend and girlfriend. Not to mention, Gabi and Collin also moved in together at a LA apartment they named Cinderella Cottage.

Today, the couple currently lives in Bethlehem Pennsylvania at a house they prefer to call The Castaway Cottage. DeMartino, in addition, also motivated her man to make his own YouTube channel, which he did.

Gabi previously pranked Collin with an engagement proposal but the couple isn’t engaged or married yet. However, they plan to move to Bermuda after their marriage and also raise their children there.

Before Gabi DeMartino finally met the love of her life, she was in a relationship with Brandon Grube whom she met as a teenager during summer 2010. She was then a high school student.

As a matter of fact, Grube is also the first kiss of DeMartino as the YouTuber shared they had her first kiss by Brandon’s locker. Not to mention, Gabi had asked her parents’ approval to date Brandon too. Her parents later gifted Grube a Mac.

In addition, Gabi also attended Grube’s Senior Homecoming as his date. But, as Brandon kept cheated on her constantly, the two dated on and off for five years. Shockingly, Gabi was found out through the mac her parents had gifted Gabi that she had been cheated on for nine months when her boyfriend was in college. That was one of the final straws.

Besides, Gabi also dated another mysterious guy who she referred to as Joey to her fans after she broke and got back together with Brandon. And, prior to meeting Collin, as Gabi hasn’t always had luck with relationships, her freshmen boyfriend of two years broke up with her for her friend. FYI, DeMartino experienced her first boyfriend as a sixth-grader.