Where has the famous comedian Carrot Top disappeared? Are the tickets for his show still available? Find more about his age, twitter, Instagram and net worth 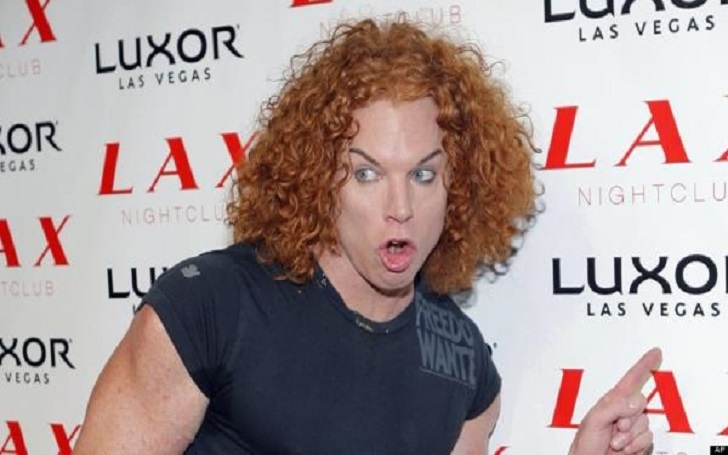 Just how many times has the name Carrot Top appeared in front of you and went by striking your funny bones? If you’re a fan then yes, this is the place for you to know all about Carrot Top.

If you aren’t a fan, even so, you’d be happy to know a person as cool as his. Carrot Top isn’t being seen on television much these days. Where could he have possibly gone? Let’s get to know all of his life details.

What is Comedian Carrot Top doing these days? Find out about his show tickets

It has been months since Carrot Top appeared in TV shows again. The last he appeared in Television was in April of 2016 in the show called @midnight. Since then, we have not seen him much. But worry not, it looks like Carrot Top is busy with his Comedy shows in Atrium Showroom at Luxor Hotel and Casino situated in Las Vegas.

Carrot Top is known for his one of a kind prop comedy and his bright fiery hair which makes him unique in what he does. He has been living his dreams making people laugh their neck off by having done more than 300 shows and being in this field of the comedian for more than 16 years already.

Also, Read: What Is Moniece Slaughter’s Age? Know About Her Bio, Wiki, Net Worth, Parents, Affairs

You can get his tickets to his live act at Las Vegas’ Luxor Hotel and Casino at any time. His shows are happening almost every day. His Meet and Greet session is at 7:00 P.M. and the ticket prices start at 43.50 dollars. Then is his live act, which will cost you 50 dollars onwards.

Even though Carrot Top does not appear on TV so often and he chooses not to make scandals and headlines every week, he does his comedy act so worthy that he is featured in new inspiring stories like this one every once in a while.

He has the highest number of followers on Twitter, compared with other social media, as he always tweets his thoughts. We can find him tweeting up to even three tweets per day at times. He has 65.5K followers with 6,505 tweets when we last checked.

He also has his own Instagram account by the name of “carrottoplive.” Comparatively, among three of his social media, his Instagram happens to have second highest followers. He has fans of 23K and about 1184 posts about his life.

And finally, he has YouTube account with 5.5K followers and also his comedy acts videos from most popular to least popular ones. His most favorite video goes by the title “Carrot Top Brings A Kardashian Baby To Arsenio’s Show” which has 53K views.

He is also active on other social media sites like Facebook. He is an active social media user, so if you need to know about his daily whereabouts, you know just what to do.

Carrot Top’s bio suggests that this name is just his stage name. His actual birth name is Scott Thompson. His birthdate is on 25th February 1965 which makes him 52 years old. Carrot’s birthplace is Florida, and he grew up by Cocoa attending his schools there itself. He has appeared in many TV shows and movies like Larry the Cable Guy’s Christmas Spectacular, Space Ghost Coast to Coast, Gene Simmons Family Jewels, Scrubs, Chairman of the Board. Criss Angel MindfreakGeorge Lopez, Reno 911and Tugger: The Jeep 4×4 Who Wanted to Fly.

His recent appearances can be seen in shows like Don’t Forget The Lyrics!, Comedy Central Roast of Flavor Flav, Gene Simmons Roast Mind Freak season 2, The Bad Girls Club, The Jay Leno Show, Tosh.0 and Tosh.0’s video of “Good For You” by Selena Gomez.

His latest appearance on Television is in April 2016 on the show called @midnight. His career isn’t just limited to giving appearances at TV shows and performing stand-up comedy. He has also remained a spokesman for a commercial, recorded a track for The Rules of Attraction, and became a guest judge of Last Comic Standing which is a comedy contest.

His hard work has paid off ever since. With such amount of workload and involvement in almost every field of Television, he has a net worth of gigantic 75 million dollars. We hope his success grows even more with time.