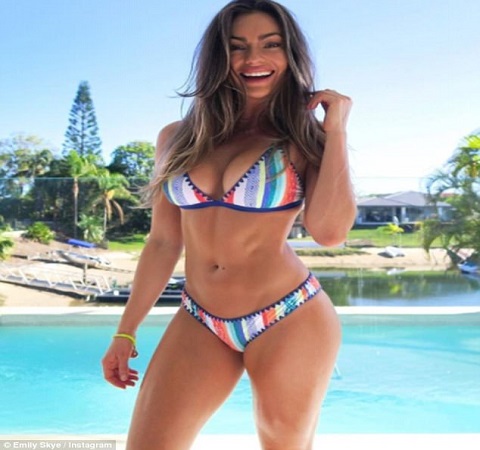 If you haven’t already heard of the Australian fitness queen, Emily Skye, you should most certainly check her out! The 32-year-old fitness Guru advocates all her fans in staying fit and shredded.

An instructor, a trainer and a professional model, Emily, undoubtedly has the most stunning body in the world. Emily currently has 2.1 million fan followers on her Instagram and 65k subscribers on her youtube channel. With such massive devotees following her, there’s no doubting about her success. But was she always a fitness fanatic? What about her relationship? Is she single? Scroll on to know, what you wish to know!

It is certain that the admirers of her athletic body would wish she was single. But, sadly she is already in a relationship. She holds no shame in sharing about her boyfriend on social media.

Skye is currently dating Declan Redmond. Skye and Redmond have been together for eight years now. Even though the couple has been dating for quite a long time, they’ve shown no sign of possible marriage.

In June 2017, Emily shocked her admirers with massive news. She revealed that she was three months pregnant and posted a picture of herself exposing her belly on Instagram.

One is a food baby and the other is a REAL BABY! . Finally the news is out. I’ve had to hide my little belly for weeks now and couldn’t wait to tell you all! @recdedmond and I are filled with so much joy and can’t wait to bring our little one into the world and share our new journey with you! So excited!!

But, Emily shows no sign of exhaustion. She has frequently been sharing her fitness picture and videos on social media. She isn’t shy about sharing her large belly on Instagram, either.

Does my bump look big in this? – The “heels” idea literally lasted 2 mins and I swapped them for flats! How do other preg mamas do it? My feet are so sore and swollen! #30WeeksPregnant #IGotDressedToday #NotInABikiniOrPJs #OutfitStillFits #DateNight #HeelsSuck

There’s no denying that the physique of Emily seems like the most gifted one. But it wasn’t god gifted to her. Her intense workouts and determination have led her to become who she is today.

The Australian fitness model has a no-nonsense approach when it comes to her health and fitness. Her daily workout looks like this:

Day 2: She does shoulder workouts on Monday.

Day 3: She works out on her biceps and triceps on Tuesday. She uses dumbbells and cables.

Day 4: Wednesday she repeats her leg exercise but light ones. She only does squat and lunges.

Day 5: Emily works out on her back on Thursday. Deadlifts, bend over and heaves are some exercises she does.

Day 7: She takes a day off on Saturdays. 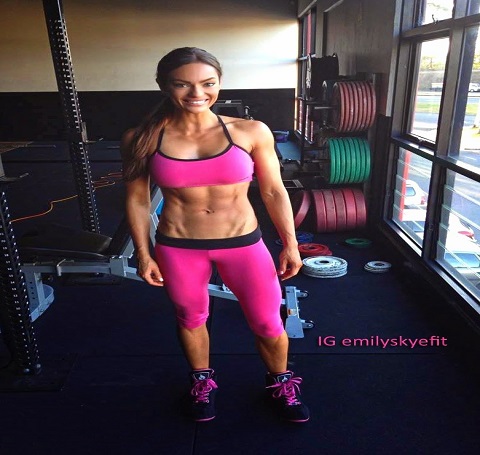 Emily believes in feeding one’s body with an adequate amount of nutrients. She does not strictly follow the vegan diet or any particular meal plan but believes in the complete meal. Emily diet includes sweet potatoes, grilled fish, salads, brown rice with beef and vegetables, green smoothie, almonds, and homemade chocolate proteins.

And, before her training session, Emily uses L-Carnitine and L- Glutamine as supplements. Emily has shared her 28 Days Shred plan on her youtube channel for staying fit and shredded.

The famous fitness model was born in New South Wales Australia on January 7, 1985. She is better known as a role model in the fitness world. An inspiration to millions, Emily’s childhood was the exact opposite of who she is now. She and her sister, Elisa, was raised by a single mother after her father left when she was only 2. Skye also went through depression as a child and was living an unhealthy life.

Emily began her modeling career in 2005. She also featured in various ads, TV shows, and music videos before she decided to quit being a skinny model. After that, she decided to change her life more healthily and become a fitness model.

The 32-year-old Emily height is 5 feet 7 inch tall. The transformation of the fitness ambassador is an inspiration to millions. With such a huge fan base, some sources claim her estimated net worth is $500,000. However, she has not revealed her exact salary nor exact net worth as of now.