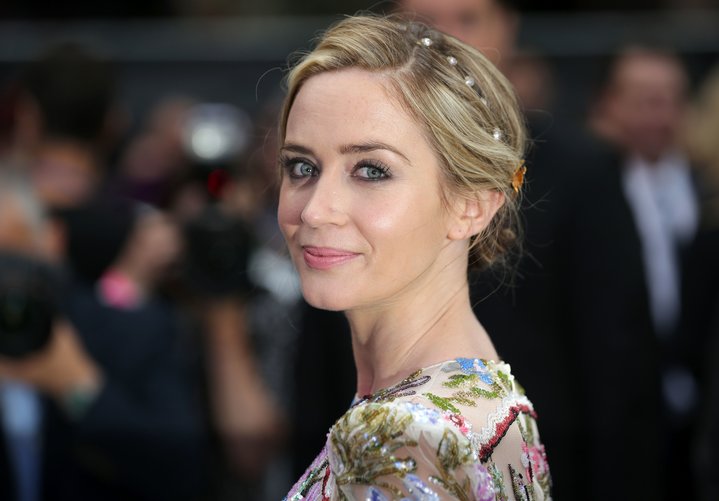 Emily Blunt who is a British-American actress recently told the People about how she met her love of life. The 35-years-old married actress said that she was at a restaurant with a friend when her now-husband, The Office star walked in. Emily said,

“We were discussing how much I was enjoying being single. And then [my friend] goes, ‘Oh, my God, there’s my friend John.’

“We were engaged within 10 months, but I think we probably knew before that.”

Emily Blunt worked for the first time with her husband in the film A Quiet Place. The duo also played the role of parents trying to defend their kids from creatures that will search them and kill them if they make a sound. Emily has delivered some eccentric performances in movies such as The Devil Wears Prada, Edge of Tomorrow and many others.

Also, Know: Who Is Heartbeat Actress Tricia Penrose Married To?

As we already mentioned above, Emily is a married woman. Emily Blunt married her boyfriend, John Krasinski who is an actor and director in 2010.

The duo began dating in November 2008, and Emily got engaged to her boyfriend after a year in 2009. Finally, on July 10, 2010, the lovebirds shared their wedding vows in Como, Italy.

Emily & I are so excited to invite you to go on a double date (friends welcome!) to our new movie, A Quiet Place! And it’s all to support Malala Fund. For your chance, click the link in my bio or go to omaze.com/doubledate

Emily and her husband John have two daughters together. Their first child, Hazel was born on February 16, 2014, and they welcomed their second child, Violet on June 20, 2016.

Before getting married to her now-husband, John, she was dating her ex-boyfriend, a Canadian singer Michael Buble. But they weren’t meant to be a husband and wife. There are no signs of divorce from Emily and her husband as they are living happily with their daughters.

Emily has reached a new height in her career. She received a handsome salary from her career of acting. As of 2018, Emily Blunt’s net worth was estimated at about $16 million. And as of 2019, Emily Blunt net worth has increased and now it is $25 million.

Likewise, her husband, John Krasinski’s net worth is also $16 million. Together, the couple is living a lavish life.

Emily was born on February 23, 1983, in London, England. She was born to Joanna Mackie, an actress, and Oliver Simon Peter Blunt, a barrister. In her childhood days, Emily had the problem of stammering. She went to Ibstock Place School in Roehampton, southwest London. After that, she joined Hurtwood House in Dorking, Surrey in a private sixth-form college which was known for its performing arts program

Emily’s career began in the year 2001. She debuted through the play “The Royal Family.” The critics admired her for her presentations. Later in 2002, she appeared in “Vincent in Brixton.” Similarly, Emily also represented the role of Juliet in Indhu Rubasingham’s production of Romeo and Juliet at the Chichester Festival Theatre.

Emily made her debut on the small screen in 2003. She played the role of Isolde in “Boudica.” Next, she also presented in some episodes in TV series like, “Empire,” “Agatha Christie’s Poirot,” and others. Emily won the “Golden Globe award for best supporting actress” in 2006 for her incredible act in the TV film, “Gideon’s Daughter.”

Talking about movies, in 2004 Emily made her feature film debut as the role of TAMSIN in the film, “My Summer Love.” Some of her great movies are “Sicario,” “Edge of Tomorrow,” “Sunshine Cleaning,” and “Looper.” In 2017 she gave her voice in the animated films My Little Pony: The Movie and Animal Crackers. Later Blunt came to the screen in her husband, John Krasinski’s horror film A Quiet Place. She will be playing in the film adaptation of Jungle Cruise, a movie opposite to Dwayne Johnson.

Emily Blunt is at the age of 35. She holds the dual citizenship of England and America. She belongs to white ethnicity. Her birth sign is Pisces. She has brown eyes and blonde hair. Blunt has a height of 5 feet 7 inches, and she weighs about 65kg. She doesn’t have any official social accounts for now. Blunt was placed 98th in FHM’s Sexiest Women of 2015.

Emily Blunt was recently asked 73 questions by the Vogue entertainment. She was at the Vogue headquarters to fulfill her duties as Vogue’s Editor-in-Chief.

Blunt loves New York, she loves the camaraderie while on set, and she never ever re-watch her old films. Look at what other things she likes and dislikes.

Well, do you know she loves pizza in New York City rather than in London? Oh, you knew!