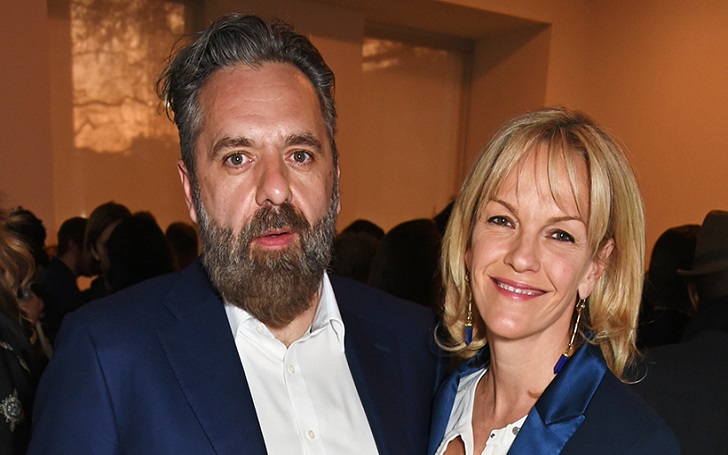 Rupert Murdoch’s second eldest daughter Elisabeth Murdoch, 48, (note: she is 50 years of age as of 2019) ties the knot for the third time with her award-winning artist partner Keith Tyson, 47, in a lavish wedding in Oxfordshire, England, Over the weekend.

The mother-of-four married her third husband and looked radiant in a gorgeous white gown whereas the groom wore a dark gray suit. Elisabeth and Keith have been dating since 2015 and finally got married. Tyson shared one of the images of the wedding day via Instagram where he captioned;

The happiest of days … #happilyeverafter

For Elisabeth Murdoch, throwing a party for her third marriage is no different as she is known for her love of giving extravagant soirees, particularly her annual New Year’s Eve party. In some of the photos which they shared on social media contained flowers adorning the ceilings around the guests, and colorful blooms hung from the walls.

The couples treated their guest with expensive champagne and dined on mozzarella and Pizzetta, followed by beef sirloin at the Michelin-starred River Cafe for the reception. Elisabeth’s first husband was Elkin Pianim, a Dutch-Ghanaian economist, whom she married in LA in 1993 and divorced in 1998.

She married PR guru Matthew Freud who is the great-grandson of psychoanalyst Sigmund Freud and nephew of artist Lucian, in the year 2001. But they split up in 2014. They had two children; Charlotte, 17, and Samson, 10.

Elisabeth was first married to her first husband Elkin Pianim in LA in 1993 and divorced in 1998. He is a Dutch-Ghanaian economist with whom she shares two children; Cornelia, 23, and Anna, 20.