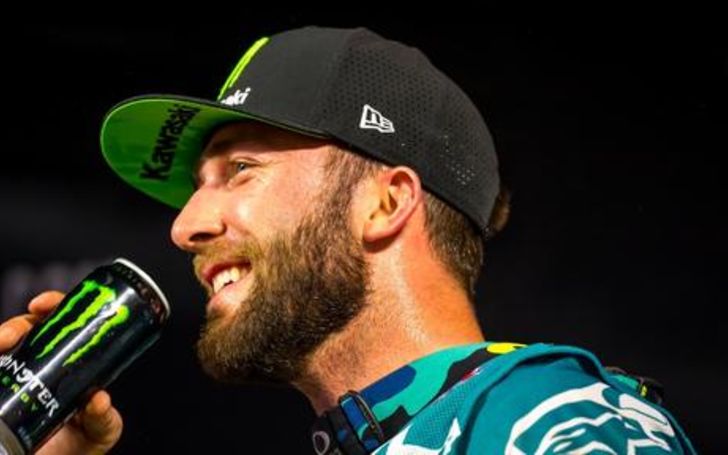 If you are a true fan of Motocross sport, then surely you must know the American Professional motocross racer, Eli Tomac.

Most significantly, Tomac is famous for competing in the AMA Supercross and Motocross Championships. Undoubtedly, he’s made 72 wins in his Motocross career.

Eli Tomac was born on November 14, 1992, in Cortez, Colorado, US. Tomac is the son of former competitive BMX and mountain bike racer, John Tomac and wife, Kathy Tomac. He spends his childhood with Greg Tomac.

Eli Tomac with his father
Image Source: The Journal

The 27 years old Eli Tomac is dating Jessica Steiner for a long time. The lovely couple frequently shares their happiness on their social media. Indeed, Tomac went on a holiday with his longtime girlfriend Steiner in New York City on May 2, 2016.

The set of two has not tied the knot to date. Along with Eli, Jessica gave birth to two children, Gnah Tomac, and Bear Tomac. The mother of two wished Eli on his birthday (November 14, 2018) as well as thanked him for being an incredible father of two kids. We hope the lovey-dovey duo gets married as soon as possible.

Recommended: Know Every Detail About Briana DeJesus’ Dating History and Net Worth

Eli Suffered from a Critical Injury

Unfortunately, Tomac went through a severe shoulder injury after he crashed off his Honda CRF450R at the Thunder valley in 2015. So, he took a 2 years gap from riding.

In 2017, Eli made a massive comeback as he won the AMA Motocross championship. In the same year, he won Spring Creek and Washougal Nationals. Apart from this, the father of two received the 2017 outdoor Motocross title with 470 points over Marvin Musquin who stood at the second and third place, Blake Baggett, with 451 points.

In 2018, Eli Tomac won the Monster Energy Cup by beating Joey Savatgy and earned the trophy as well as $1 million.

The American racer has made his successful career in Motocross sport. Not only that he has also able to gain both wealth and fame throughout his career. Well, what is the exact net worth of Eli Tomac?

According to Wealthy Persons, his net worth is estimated at $5 million. As per reports from Risk, the average salary of a professional motocross racer is $85,000. The sources also stated that the racer can earn a handsome amount of money through endorsements, team racing, and other promotional activities.

You may like: Know Every Detail About Andy Bohn’s Relationship Status and Net Worth

Apart from this, Eli also earns from other sponsorships like Monster Energy, Kawasaki, All-Star, Bell Helmet, PPG industry, and so on. In 2018, Tomac received the prize of $1 million for winning the Monster Energy Cup. In addition, he sells his T-shirt ET3 on his official website.

ET3 advertised his Sweatshirt on his Instagram in 2017. Furthermore, he even earns an estimated value of $2.427 per Instagram post for marketing. Eli posted an Alpine Stars shoe on February 7, 2018.

Besides that, he is also quite famous and active on social media platforms like Instagram with 887k followers and Twitter with more than 137k followers. We believe his tweets and posts are also donating in some parts of his net worth.