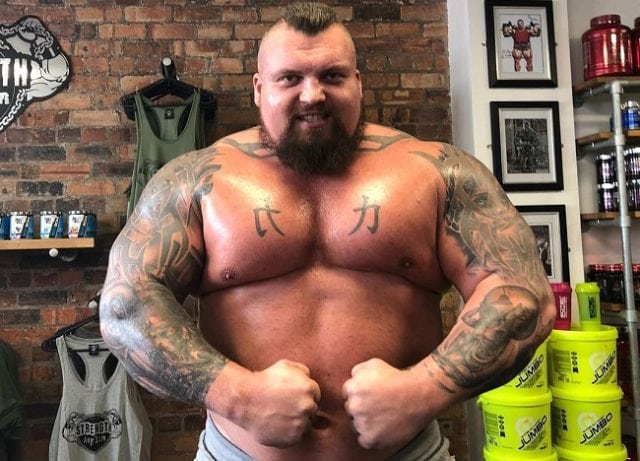 The Beast is back!

Nevertheless, last week, the athlete took over the Internet to reveal how his body has altered in a matter of months. The deadlift record holder showcased his remarkably slimmer physic and more defined abdominal muscles. His insane weight loss journey must be tough as he dropped 5st. (31kg) in a year.

Behind every successful man, there is his woman who keeps on pushing him off limits. Eddie might be the world’s strongest man, but his wife is the one behind all his triumphs.

Hall is married to his wife, Alexandra Hall, for more than six years. The couple exchanged their wedding vows on June 09, 2012. In June this year, he wished his wife their sixth wedding anniversary via an Instagram post. However, the road to a blissful marriage isn’t easy as it looks. His wife was all set to leave him almost five weeks before the World’s Strongest Man competition. He begged her to stay and give him a final chance to turn things around. By God’s grace, he won the title and saved his marriage.

It is to blame Eddie for the hiccups that troubled his marriage. The obsession of strongman made him forget about his wife and abandon the parental duties. The duo has two beautiful kids together – a son and a daughter. His wife singlehandedly raised her children without any complaints.

As of now, Eddie has already saved his marriage from divorce. All he cares at present is spending quality time and bonding with his wife and children. Isn’t that inspiring?

The professional strongman grasped all the attention after winning World’ Strongest Man in 2017. Not only the title but also the victory brought unexpected fortune in his life.

Eddie Hall net worth raised from least to the highest. The championship bestowed him with a handful of sponsors and endorsement deals from where he earned good enough to lead a healthy and prosperous life. But what’s the figure of Eddie Hall net worth?

Eddie Hall weight loss transformation has inspired many people to stay fit and healthy. Within a year, he has slimmed down by five stone, from around 30 stone. Last year during the championship, he weighed 195kg. However, after the massive weight loss, he now weighs only 164kg.

196kg vs 164kg
2017 Vs 2018
Lots of people asking for comparison photos from my biggest to now, well here it is….#transformation #backupyourbullshit #sinkorswim #beast
Big Love… https://t.co/ogodeVhQV7

The Staffordshire-based star intended to retire from the World’s Strongest Man competitions last year. He also shared some tips to shift the pounds for dieters as they shouldn’t skip having a good breakfast in the morning.

Edward Hall was born in 1988 in Newcastle-under-Lyme, Staffordshire. He went to Clayton High School. As a teenager, he was a successful competitive swimmer and rugby union player. Later, he was expelled from school.

He celebrates his birthday on 15 January that makes his age 40.

Eddie Hall height is also gigantic along with his weight. His height counts 6 feet 3 inches.

Nothing is known about Hall’s family, parents, and siblings.