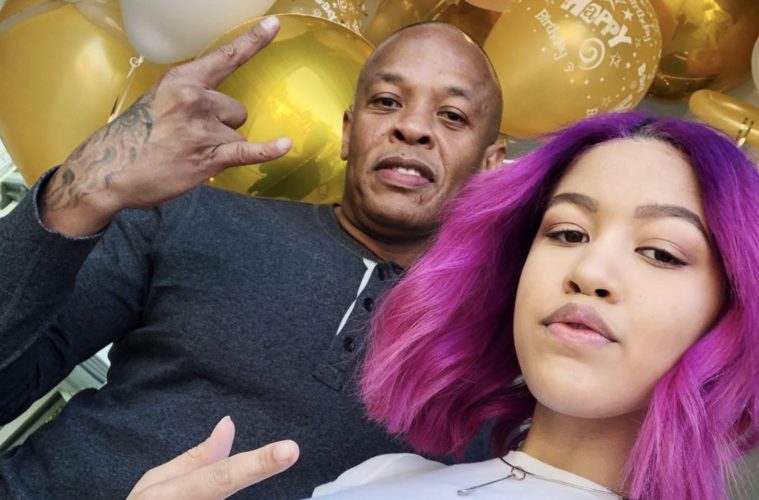 Not everyone has the perks of being born with silver spoons on their mouth. Despite having the privilege of being Dr. Dre’s daughter, Truly Young is exploring her limitations on her own. Having a music mogul as “father” is a pressure and an inspiration at the same time to Truly to pursue music as her career.

Her bold fashion statement often makes headlines. Her brave, creative attitude into the beauty realm has inspired many youths to follow their hearts. She has been flaunting her hot-pink hair for the past six months that recalls Gwen Stefan, who is one of her beauty icons in the early No Doubt days. Her supernaturally carved bone structure inherited from her mother, Nicole Young, makes her look flawless.

Who is Truly Young?

Born in 2001, Truly young is an aspiring American singer. However, she is famous as the youngest daughter of Dr. Dre and Nicole Young. Apart from that, Truly believes in making her name on her own. A few months ago, she released her very first single titled LoverBoy on iTunes and YouTube. Through her debut, she has stretched herself as an upcoming singer in coming days.

Even though Truly is nowhere near her father’s legacy, she is determined to establish herself as a household name in the music industry. Besides, she is no less to an Instagram star. Her popularity and fandom show her growth from being a star kid to an ambitious singer.

Being the daughter of the huge star, she feels the pressure to succeed at the University of Southern California after the rapper bragged about her acceptance on social media amid ”the nationwide college admissions scam”.

Her father Dr. Dre, born as Andre Romelle Young, is the CEO of Aftermath Entertainment and Beats Electronics. Being one of the legendary rappers of all time, he has produced hundreds of albums and managed the careers of many rappers like 2Pac, The D.O.C., Snoop Dogg, Eminem, Xzibit, Knoc-turn’al, 50 Cent, The Game, and Kendrick Lamar. He is one of the main reasons behind the promotion of West Coast G-funk.

Dad pushing me to go to USC

As of 2018, Dr. Dre is the third richest rapper in hip-hop, with over $770 million net worth. His daughter, Truly gushed about the secret that lies behind her name, saying:

“My dad gave me the name Truly. He just thought it was beautiful.”

Starting the career as a member of the World Class Wreckin’ Cru to six Grammy Awards, Dr. Dre has spread his magic in music, acting, and entrepreneurship. Truly’s mother, Nicole Young is the one behind the success of Dr. Dre. She is an ex-wife of NBL player, Sedale Threatt. She married Dr. Dre in 1996.

Truly Young is not anymore a child as she is now 18 years old. She has already started singing and also modeling for brands. Her usual post sees her posting ads for the brand Vivienne Westwood. She earns around $327.75 to $546.25 per ads post on her socials.

Truly Young was born in California, USA. She celebrates her birthday on August 8 that makes her age 17 at present. Her father helped her to pursue her deep-seated passion for music. She is a self-taught singer and guitarist. She told:

“My parents offered to give me lessons, but I really wanted to learn myself.”

Truly spent her childhood in California with her family. She has six siblings from her father and his five different women altogether. She is the half-sister of Curtis Young aka “Hood Surgeon,” La Tanya Danielle Young, Andre Young Jr. who died from an overdose of heroin and morphine, Marcel and Tyra Young. However, Dr. Dre’ son, Truice Young is her biological brother.

Some of her biggest inspirations for music are Nirvana, Lana Del Rey, and The Cure. In the Vogue interview, she stated that her parents were super supportive of her style, saying:

“As an artist I want to be able to inspire young people to break away from societal standards. My mom and dad allowed me to try anything without fear of being judged.”

Truly has a decent height of 5 feet 6 inches. Apart, Dr. Dre revealed that she is going to the University of Southern California “all on her own. No jail time!!!”

Following her entry to the USC, Truly posted a smiling selfie of hers with a caption, “All My Hard Work Paid Off. IM Going to Film School.”

Further, her father along with Jimmy Iovine, donated $70 million to the school in 2013.