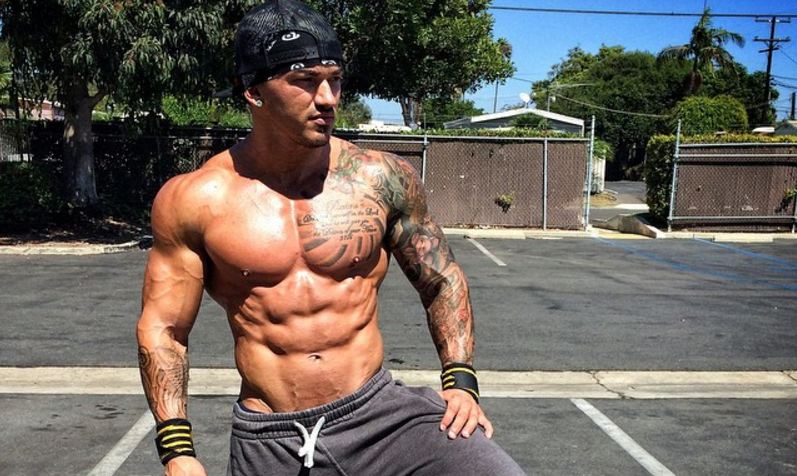 Nowadays people are very much into bodybuilding. There are a lot of bodybuilders and athletes in social sites among them some of them are good and some are bad. Devin Physique is a tattooed bodybuilder who is currently facing bad times because of his actions. The fitness model was found guilty for using photoshop in his Instagram photos to make them look good.

Devin Physique is a tattooed American fitness model, Instagram influencer and nutritionist who started his journey as a little skinny kid. He is a self-made the person who keeps himself motivated and his clients motivated through his pictures and workout plans on the internet. Let’s have an insight into Devin Physique’s Tattoos, Age, Height, Girlfriend, Married, Instagram, and  Net worth.

Devin is already a guy with a pretty good physique. However, the dream to earn more money and more fame corroded his mind. In order to showcase more gains on his pictures, Devin used adobe photoshop in his pictures.

One can see that the picture on the right-hand side is photoshopped. And the image on the left-hand side is the original one. Due to his actions, a lot of people got disappointed including his sponsor SHREDZ. As a result, Company fired him, and his sponsors canceled him.

But Devin didn’t allow this thing to bother him and he accepted on the internet that he had used photoshop in some of his pictures. He said, “I just want to say sorry to all of you guys if I let any of you down by touching up my photos.” And Devin is currently more motivated than ever to prove him right again and is in a very much healthy mental state to pursue his dream and goals.

It is very hard to find a partner in life who shares the same interest. However, Devin is a very lucky man who got the perfect partner in his life. Though they are fitness junky and are same in various matters it seems like the love for body tattoos is more in Devin than in Krystyna.

Devin dated Krystyna for a very long time and shared many ups and downs in their life together. Krystyna is also a fitness junky like Devin and also a woman with a very good dancing skill. Krystyna is active in Instagram as “mrsphysique” where she shares pictures of her gains and workouts.

We hate to be the bearer of the bad news to all the female fans of Devin because he has been taken. Recently, Devin proposed to his long-term girlfriend, Krystyna in a very romantic manner. He took her to the top of snowboarding ill and proposed her there, and everything went as planned which ended with Krystyna accepting his proposal.

The fiancés are very much happy and in love with each other with hopes of getting married shortly. We also pray for the successful marriage of the couple which is likely to happen in the coming days.

Everybody needs a reason to pursue something in their life. Devin’s reason was an opinion of a friend where he was told that he looked very much like a sickly and skinny kid. This word acted as gasoline to his fire, and he started to workout on a daily basis and made for name himself in the field of bodybuilding with a stunning physique.

Devin mainly focuses on Instagram and operates with Instagram in order to promote his sponsors and brands. The fitness model has amassed a huge number of followers on Instagram which is approximately 1.7 million. He posts a picture on a regular basis, and motivational videos in order to update his fans regularly.

With so many followers and brands to his name, it is evident that he earns a hefty amount of money. However, there is no official information regarding his earnings. As of now, his net worth is under review.

Born in 1990, Devin Zimmerman aka Devin Physique grew up in the Chino Hills of California. He celebrated his birthday on the 13th of June.

Devin loves his mother very much and also his two younger sisters. Unfortunately, there is no further information regarding his family names and current whereabouts.

Devin is a young bodybuilder who is just 28 years old and is already very famous in the world for his chiseled physique. He weighs around 175-185lbs, and all of that weight well placed on his body which measures at the height of 5feet and 8inches.