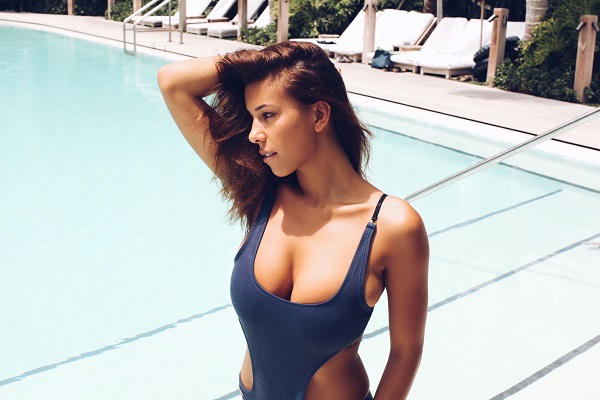 What happens when a stunner inside out meets internet? The answer would be something worth watching. The same kind of story is of Devin Brugman, who is highly prevalent among mass for being an American model. Not only a model but also Devin has added many feathers in her cap.

Bikini Girl’s Devin Brugman is a model blessed with abundant beauty and good looks. She is a Hollywood celebrity who is frequently grabbing the attention of media and public with her charm and alluring features. Devin has excellently earned a huge fan following for herself including million of boys. Some people must be wondering if she is single or dating.

At present, Devin Brugman is dating Daniel Yaro. The information about her current boyfriend is limited. However, we can behold some pictures together of Devin and her boyfriend, Yaro.

On 27 December 2016, on Devin Brugman’s 26th birthday, her boyfriend, Yaro shared an image with her to wish her happy birthday. The couple is still dating being supportive of each other’s career.

Before Yaro, the fashion blogger was in a relationship with Greg Little in the year 2013. Her ex-boyfriend was a professional American NFL player. The duo dated each other in the year 2013. However the couple split-up after some time; the reason behind their split was supposed to be Greg’ financial status.

As of 2018, Brugman hasn’t married anyone. She is still happily dating her boyfriend, Yaro, and has never gushed about getting married to him. What do you think? Will Devin Brugman marry her boyfriend, Daniel Yaro?

Devin Brugman’s Net Worth: How Much Fortune Does She Have?

Devin Brugman is best known for being a bikini model. She is engaged in multiple projects. Her sexy figure has grabbed the attention of many agencies.

Besides being a model, Devin is also an entrepreneur and fashion blogger. Devin co-founded ‘Monday Active,’ ‘Monday Swimwear,’ and ‘A Bikini A Day.’ She is also running her online brand. Hence, being engaged in multiple career fields, Devin Brugman’s net worth is worth of knowing.

As of 2019, Devin Brugman has an estimated total net worth of around $2 million. She made her worth from her career as a model; she earns around $45 thousand per year.

Brugman is not only a model, but also an entrepreneur, as she has co-created two companies, A Bikini A Day and Monday Swimwear alongside her friends. Her swimwear usually costs between $77 to $179.

Besides, she also earns from her socials. She, for her per ads post on Instagram, generates inbetween $2714 to $4523.

Devin Brugman was born on 26 December 1990, in Oakland, California. When she was four years old, she moved to Hawaii along with her parents. She completed her high school education from Hawaii. After the completion of her higher education, Devin moved to Los Angeles to chase her dreams.

Devin Brugman’s career started as a model. Once before going on a vacation with her friend, Natasha Oakley she was into small modeling projects, so the agency provided them a photographer. Later,  Devin started to upload bikini pictures of them on Instagram which was adored by many. They were able to make their names as the bikini girls.

Devin Brugman is not just a model but a businesswoman and fashion blogger. Along with her modeling, Devin established herself as an entrepreneur, and at this time, she is a co-founder of ‘A Bikini A Day,’ ‘Monday Swimwear,‘ and ‘Monday Active.’ Brugman has also set up one of the largest online bikini markets. She is planning to enlarge their business on a large scale with more seasonal collections in coming days.

We wish her all the best in her future endeavors.

Devin Brugman is currently 27 years of age. She belongs to white ethnicity and holds American citizenship. Her birth sign is Capricorn.

Devin Brugman has an average height of 5 ft 7 inches, and she weighs around 64 kilos. Her body measurements are 37-26-36 inches. Devin’s brown hair looks too beautiful on her glowing white skin tone. She has gorgeous brown eyes. Her best friend name is Natasha Oakley.