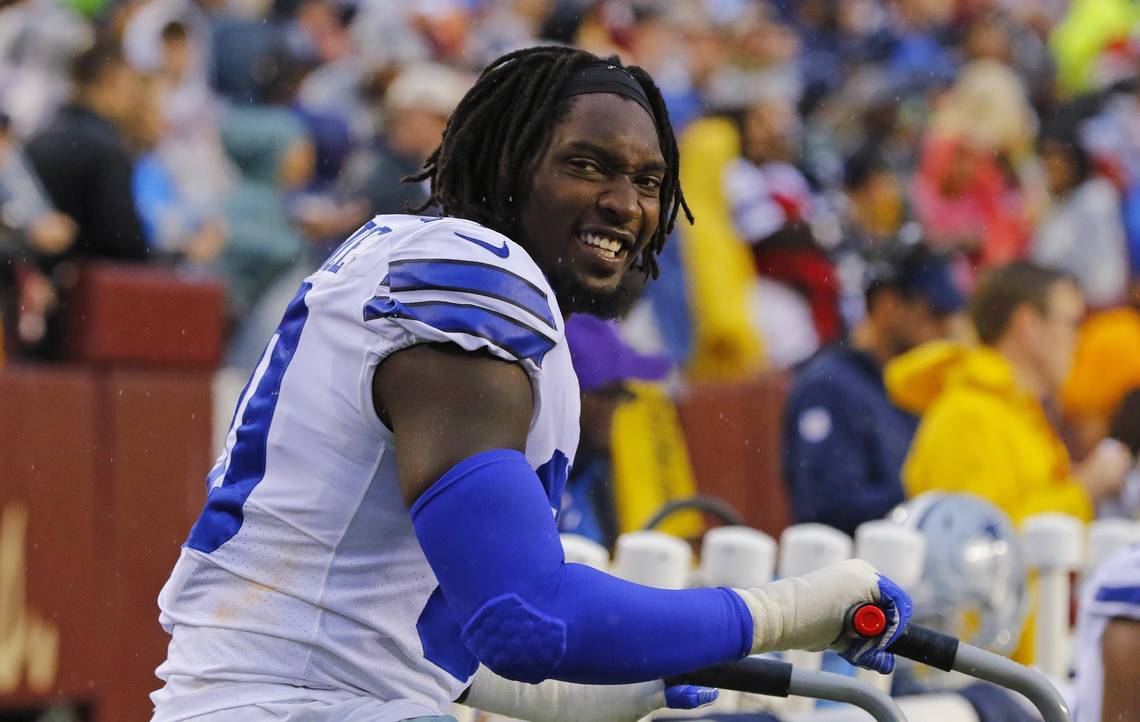 DeMarcus Lawrence is popular with his another name, “Tank”, is a professional American football player. He plays as defensive end position for the Dallas Cowboys of the NFL. He was die-heart Cowboy fan since all his life, and then the time came for him to play for his dream team in the 2014 NFL Draft. Moreover, DeMarcus used to play college football at the Boise State University before playing for the Cowboys.

At Boise, Lawrence scored a magnificent stat line. Above all, in two seasons, he played 23 games, finishing with 120 tackles, 20 sacks, and 7 forced fumbles. Now, here are all the facts you need to know about the stunning player, including the reason behind his nickname “Tank”.

On the deck, we will be digging out DeMarcus Lawrence bio, wiki, stats, contract, girlfriend, wife, salary, net worth, and Instagram.

DeMarcus Lawrence is not married yet. However, he has a son and a fiancé, Sasha Almeida who is a personal stylist. It is not revealed that how Lawrence and Sasha first met. But, from his fiancé, Sasha’s instagram post, probably they first met in the year 2012. Sasha’s first Instagram post was with her fiancé Lawrence giving the shout-out for winning the best defensive lineman of the year on 4th December 2012. As a result, we might guess that the duo probably met in 2012 initially.

After complete two years of spending their time together, Sasha gave birth to a baby boy, DaMari Tyrone Lawrence on May 15, 2014. Finally, the couple engaged after living together for more than four years and raising their son to two years on December 25, 2016. Yes, the pair engaged on the night of Christmas.

The couple also has another 8 years old son, and 12 years old daughter namely as Kael and Mariah, but, they no details are found regarding whom do the children belong to. Instead, Lawrence family are living blissful and active life.

However, the future Ms. Lawrence, Sasha, and DeMarcus, hopefully, would be marrying soon. Maybe, DeMarcus is planning some good to happen before exchanging their wedding vows. As of now, DeMarcus and his partner are enjoying the bliss of parenthood. As it is a huge responsibility to carry, we wish the couple all the luck for their endeavors being a parent.

DeMarcus Lawrence Net Worth and Salary

The net worth of DeMarcus Lawrence recently has seen a hike of 21% over the past few years.

Dallas Cowboys’ DeMarcus Lawrence has career earnings of $22.3 million over five seasons, which ranks 548th among active NFL players entering 2018. In 2017, his earning was $1.75 million which ranked 52nd among DEs and 575th overall in the NFL.

DeMarcus Lawrence aka Tank was born in Aiken South Carolina on 28th April 1992. He told his nickname as “Tank” originated when young out playing on the baseball court when he had a fight with his friend. After that happening, his friend would say “I tanked him on his head, I tanked him”. Therefore, since then, people call him a tank. His parents’ name is Yvonne as mother and Tyrone Lawrence as the father. Lawrence also has an older sister, LaShondra.

DeMarcus Lawrence attended Butler Community College in the year 2010 to 2011. Later, he enrolled at Boise State University and began his college career with the Broncos.

Lawrence stands at the height of 6 feet 3 inches with a very athletic body weighing 120kg. He belongs to African- American ethnicity and holds American nationality.