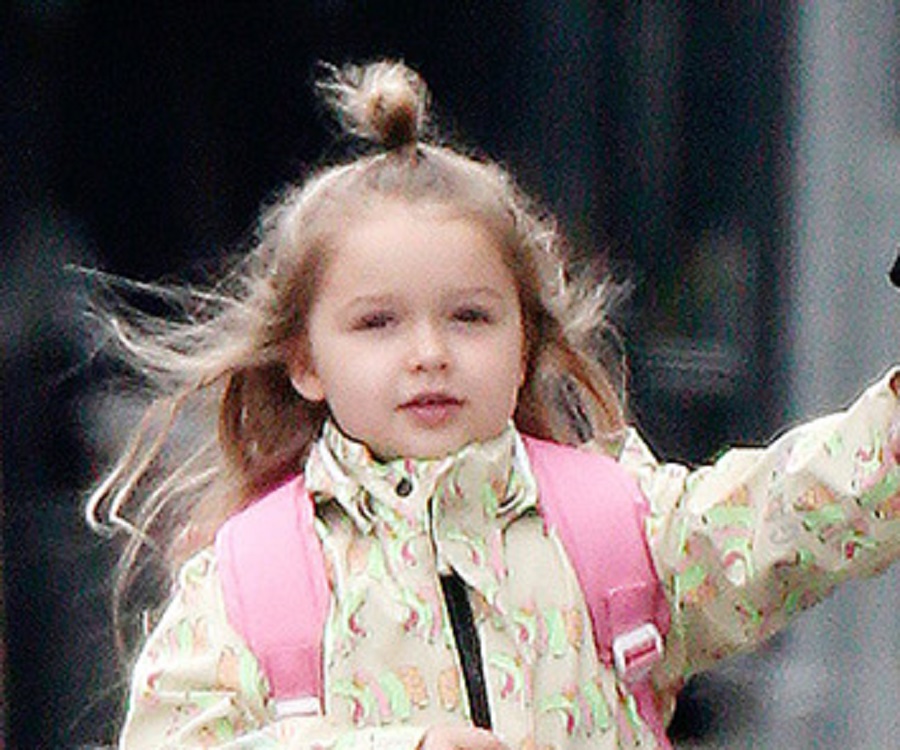 Being the daughter of David Beckham and Victoria Beckham, Harper Beckham has been the most loved child on the Internet. Along with her parents, people are also fond of her as she is a cute little child. Her parents Instagram posts have even amplified her charming personality. Today, we’ll be exploring Harper Beckham’ age and her parents. Also, learn Harper Beckham’ bio and her wiki facts.

Harper Seven Beckham is the only daughter of the one and only David Beckham and Victoria Beckham. She was born in 2011 in Los Angeles, California. The beautiful Harper will turn seven years old this July 2019. She is currently studying in a top London Stage school. After her birth, her father announced it on his Facebook, saying:

‘I am so proud and excited to announce the birth of our daughter, Harper Seven Beckham. She weighed a healthy 7lbs 10oz and arrived at 7.55 this morning, here in LA. Victoria is doing really well and her brothers are delighted to have a baby sister.’

The secret behind Harper Seven’s unusual middle name is her mother’s favorite writer, Harper Lee, the author of To Kill A Mockingbird, and her father, David Beckham’s Jersey number, seven.

As you already know about Harper Beckham’ parents, they are Posh and Becks. Harper’s father, David Beckham is a former professional football player from England. He played for top clubs like Manchester United, Real Madrid, Paris-Saint Germain, Milan, LA Galaxy and many others throughout his career.

Also, see: Is Stephen Belafonte’s Ex-wife Mel B Dating Someone? Also Know Her Wiki-Bio including Her Net Worth!

He married his wife, Victoria Adams on 4th July 1999 at Luttrellstown Castle in Ireland. As of 2018, David Beckham’s net worth is about $450 million.

Harper’s mother, Victoria Beckham is an entrepreneur, model, singer, and fashion designer. She was one of the members of pop group Spice Girls. The mother of four, Victoria is an inspiration to all the women across the globe to be independent and family oriented at the same time.

About Harper, Victoria once said,

“Harper can be a little tomboy. She likes to play football. She dresses comfortably, and that’s what’s important to me, that the kids are happy. And that she can run around and play, and that she’s not in fancy clothes that she can’t play in. But we play with makeup at home and she enjoys that. She’s six. But it is nice bonding thing to do with your daughter.”

Talking about Harper’s siblings, she is the most lovable sister of her three brothers, Brooklyn, Romeo, and Cruz Beckham. Her brother, Brooklyn is a close friend of Madonna‘s son, Rocco Ritchie. Her parents are so close to all their children. Both her parents are honored with OBE. She is a lucky child, isn’t she?

Harper Beckham celebrates her birthday on 10th of July and is currently six years old. She doesn’t own any social accounts as she is so young and that is inappropriate. But her parents never miss any chance to post her adorable picture on their respective Instagram accounts.

Also, see: Is Chloë Grace Moretz Back On Dating Her Ex-Boyfriend Brooklyn Beckham? Does This Mean She Rejected Her Childhood Crush Aaron Carter’s Proposal?

Harper is fond of makeup and beauty related products. Like her father, she also loves playing football.

Harper has always been her mother’s companion when it comes to fashion as she dresses impeccably even being so young. She has rocked Marc Jacobs wellies and Vivienne Westwood jellies. Back in 2014, Harper was the Most Stylish Celebrity Child.