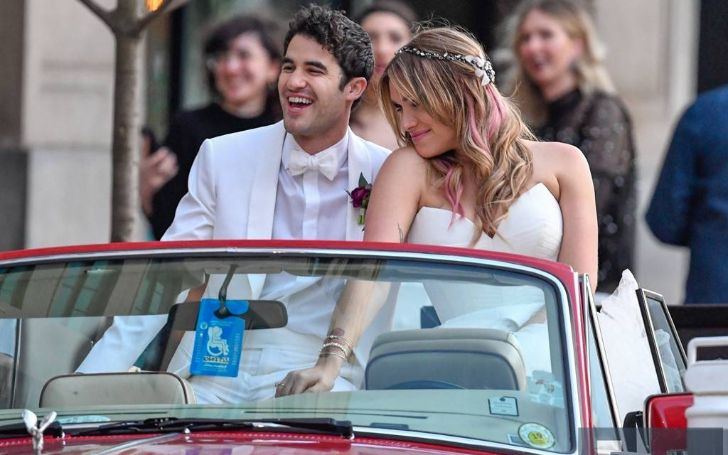 The former Glee star Criss turned heads in an all-white tux with a bow tie and black patent leather shoes, while Swier rocked a sleeveless white corset-tulle combo gown with a comfy pair of white boots.

Darren Criss and Mia Swier engaged in January 2018 through an Instagram post after eight years of dating.

Mia and I have had seven and a half years of fun, wacky, wonderful, CRAZY adventures together. And I’m happy to announce that we’re kicking those adventures up a notch. We’re going for it. To boldly go where neither of us have gone before. Engage.

Later, in an interview with Esquire, the actor revealed they had engaged for some time and waited a while before the public announcement.

It was a long time coming. We’d waited a while before we announced it. I had a whole thing written, like, ‘Usually I don’t like talking about my private life…’ which I really don’t—I was really allergic to it for a while. Eventually, I got over myself and realized that it’s just the best way to let people know.

Swier is a Los Angeles-based writer and producer at Fox Networks. She directed numerous short films and music videos for stars such as Keke Palmer and has a degree from New York University’s Steinhardt School for Media Studies and Television Production. Additionally, She’s also a rock-’n’-roll bassist and vocalist while Criss is widely popular for his role as Andrew Cunanan, the social-climbing narcissist turned serial killer in The Assassination of Gianni Versace: American Crime Story.