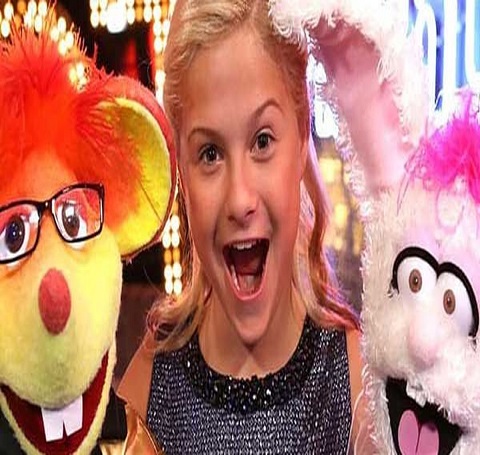 Can you make a puppet talk in front of thousands of people without even noticing them? Of course, you can’t. It requires an incredible talent to do so. If you are interested in the people’s talent, then America’s Got Talent must be your favorite show.

Darci Lynne Farmer, a young singing ventriloquist, is one of the finalists in America’s Got Talent 2017. She won millions of hearts through her wow performances with the puppets.

Read more: Beautiful Tribute From a Daughter To a Father! America’s Got Talent Evie Clair sings her heart out while paying tribute to her father

Let’s check out Darci’s journey on AGT: You must be curious about who Darci Lynne’s farmer parents are and what they likewise do. Does Darci Lynne have siblings, or is she the only daughter? So know Darci Lynne farmer more through her wiki-like bio.

Darci Lynne Farmer is a 14-year-old young girl from Oklahoma City. She had her inspiration to pursue ventriloquism from Miss America contestant Miss Louisiana Laryssa Bonacquisti.

Darci performed with her rabbit puppet ‘Petunia’ on her first audition episode at the end of May. Furthermore, she was the highlight of the event. She also received Golden Buzzer from Mel B, which sent her straight to live shows.

Darci even shared her photo with Simon Cowell on Instagram after she made the show.

I made the show America’s Got Talent! Watch for me on the season PREMIER on May 30th on NBC at 7:00. #agtpremiere

Isn’t it great? Oh, she is such an adorable cute girl. Look at her on the YouTube video.

Darci made a golden buzzer performance in her audition on AGT, 30 May 2017.

Isn’t she remarkable? She captured millions of hearts with her first performance.

For her second performance in the ‘AGT’ quarter-final, Darci made merry with a mouse puppet, Oscar. Oscar sang an adorable cover of The Jackson 5’s Who’s Lovin’ You for Mel B as he had a crush on Mel B. Darci made her role model pretty excited and happy for her incredible performance.

She made her way to the semi-final, where her hands were full with the little old lady, Edna, who lusted after Simon Cowell. She made Simon blush, and he even said that he could have a bit crush on Edna. He found the performance brilliant. Look at her YouTube video to see her performance.

Darci has a wicked sense of humor, and she is heading towards a great height of achievement. Her mother and father are proud of her and cry when Simon appreciates her performance.

Finally, Darci made her way to the finale and became a finalist in AGT 2017. Today, she is a great celebrity at a young age. She also went to Steve Harvey’s show as a guest.

It is unsurprising because America’s Got Talent is such a big show with worldwide popularity.

Darci has amazing ventriloquism, pitch-perfect singing voice, and comedic timing that allows her to hit flawless high notes, even when she closes her mouth!

Caption: Darci brought together her two puppets, Petunia and Oscar, in the finale episode, 18 September 2017.

Simon could not stop himself from appraising her and said Darci is an emerging star and she will win AGT 2017. Such a great compliment by Simon to a young girl who is just 12 in her age.

The best part of doing this job is when you are there and you can say, ‘I was there at the beginning of someone’s career and I witnessed a star,'” Simon Cowell praised. “Tonight, again, I’ve just witnessed a star emerge, because that’s what you are. You’re special, incredible, funny, talented and I think you’re going to win

Do you think the judges’ predictions came true? She became the show’s winner because of which her fame reached a record high overnight.

Farmer achieved more votes than the other nine finalists. It was not just a matter of votes; the talent was more important in making her win the show.

She thanked her fans for their support and shared her voting page on her Facebook and Instagram posts:

Caption: Darci thanked her fans for the support and shared the voting page on 20 September 2017.

Darci Lynne Farmer, who celebrates her birthday on 12 October, is a ventriloquist. She was born in the year 2004. Darci Lynne Farmer’s parents, Clarke and Misty Farmer, surprised her with a puppet on her tenth birthday when she asked for a puppet to help herself overcome shyness.

Darci Lynne Farmer has three brothers: Nick, Dalton, and Nate. She loves the company of her brothers and likes to play with them. In return, her brothers care for Darci a lot.

Darci was on NBC’s Little Big Shots at 11, hosted by Steve Harvey. Moreover, she also won the grand prize of $300 in a local talent show called Edmond’s Got Talent.

Darci trained in gymnastics for 20 hours a week when she competed in pageants at six. Furthermore, she spent 45 minutes backstage with Terry Fator when he performed in Tulsa. Terry Fator is a winner of AGT season 2.

Darci Lynne Farmer is 17 years old as of June 2022. She has a net worth of $8 million. She is single as of now and focusing on her career.