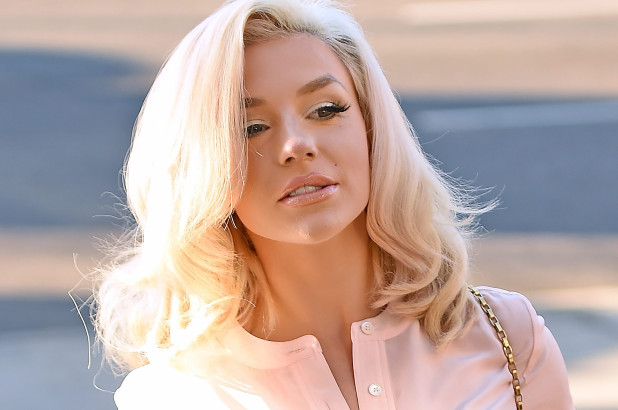 The American media personality, model, and singer-songwriter Courtney Stodden is no stranger to posting a host of sizzling images on her Instagram. Recently, she stole all the limelight after sharing another racy image on Instagram. She was flaunting her surgically enhanced figure in a tiny white bikini.

Meanwhile, Courtney has been promoting her single Daddy Issues that seems to indicate her complicated relationship with her ex-husband, Doug Hutchison. Moreover, she is also a national spokesperson for People for the Ethical Treatment of Animals (PETA). However, she came to international attention after her marriage with actor Doug Hutchison in 2011.

On the deck, we’ll be exploring Courtney Stodden wiki facts, including her age, height, family, net worth, songs, and husband.

At age 16, Courtney joined an online acting workshop by actor Doug Hutchison. Nobody knew she could be Mrs. Hutchison in future at that time. After the workshop concluded, the two fell in love before meeting in person.

After Hutchison realized the age difference, he told her mother that he would end his relationship with her if they objected. However, they gave Courtney the freedom of choosing her husband.

On May 20, 2011, Courtney got married to Hutchison in Las Vegas, Nevada. She was only 16 when she married Hutchison. People labeled her husband as a “pedophile” as he was 50 when he married his third wife, Courtney. Due to their unusual marriage, his family disowned him.

Read More: Is Model And Instagram Sensation Laci Kay Somers Dating Golfer Tiger Woods? Exclusive Details Along With Her Wiki-Bio And Net Worth

In 2012, Courtney along with her husband appeared in the second season of the VH1 reality television series, Couples Therapy. On the contrary, on November 1, 2013, the 34-year age gap became a primary factor for their divorce.

However, the two reconciled but not for long. On May 17, 2016, Courtney had announced about her pregnancy. Unfortunately, she went through a miscarriage. In 2018, Courtney filed for divorce from her husband without any requests of spousal support.

Soon after her relationship ended, she moved in with film producer Chris Sheng. She was living with her beau in his $3 million home in Beverly Hills, California. According to her, she likes to play her life around where the cameras are.

Soon after she added a picture on her social media along with stating she is moving out with her things from the mansion she shared with Chris, her ex-husband Doug called her a fame whore.

According to him, she is an addict of fame. Since moving out of his apartment, Courtney is not dating anyone at the moment.

Courtney began her career in the entertainment industry as a model. Later, in 2009, she presented her cable TV show The Courtney Stodden Show. In 2009, she competed as Miss Ocean Shores Teen USA in Miss Washington Teen USA pageant.

Following her pageantry career, she released some original songs like “Car Candy,” “Crazy,” “Don’t Put It on Me,” “Hurting People,” and “We Are America.”

In August 2013, Courtney appeared as a housemate on the twelfth season of the British version of Celebrity Big Brother. She also did the video for 50 Cent‘s “Don’t Worry Bout It” and the series Hollywood Hillbillies. In 2015, Vivid Entertainment released her solo sex tape.

According to many sources, Vivid Entertainment pays a particular percentage from the number of views on the video. It can upward of $100k to $1 million.

From her Instagram account, she earns somewhere from $796.5 – $1,327.5. She recently released her song Daddy Issues on Spotify and Google Play Store. The song will also contribute to her already growing net worth.

Courtney Alexis Stodden was born 1994, in Tacoma, Washington, to her parents, Alex John Stodden and Krista Kay Keller. She grew up with her two sisters, Ashley and Brittany, in Ocean Shores, Washington.

Courtney often describes her childhood as beautiful and fun due to her extremely spoiling parents. Her passion for singing and writing developed from a very young age.

Take a look at Courtney talking about her relationship with her mother and more!

She was homeschooled before joining an online private Christian academy. Courtney celebrates her birthday on August 29 that makes her age 24. She is of white ethnicity.

In 2013, Courtney had a breast augmentation that increased her breast size from size C to the size DD. She has a height of 5 feet 3 inches. She weighs 125 pounds and has a very fit physique.