Codi Butts From ‘MTV’s Floribama Shore’ Is Full Of Southern Charm; Explore The Details On Codi Butts Wiki Along With His Love Life!

A native of South Carolina and one of the eight cast members of MTV’s new show “Floribama Shore,” Codi Butts describes himself as loud, opinionated, and funny. “Floribama Shore” is the line-up of “Jersey Shore,” but Codi Butts is not your average Mike “The Situation.” He is far from cookie-cutter, and soon his patriotic speedo and smiling face will take you on a bumpy back-road ride. You can see him in the Floribama Shore’s episode, and most probably you will fall in love with Codi. Today, let’s learn the details of Codi Butts personal life. Is Codi Butts dating a girlfriend? Or, has Codi Butts married already? Every detail is available on Codi Butts wiki facts:

Who is Codi Butts? Interesting Facts On Codi Butts Wiki!

Born and raised in Westminster, South Carolina, Codi Butts was a bartender at ‘The Spot on the Alley’ in Seneca, South Carolina before joining as a cast member of Floribama Shore. He considers himself as an “epitome of Southern.” He loves fishing, hunting, and pampering himself in a Ralph Lauren polo shirt with a popped collar. According to Codi, he represents New South, not the Old South. He said:

I’m more accepting, more aware. I care about people’s feelings. To me, one of the greatest days as a South Carolinian was seeing the Confederate flag taken down from the State House. That showed that we’re moving forward

Codi Butts has not revealed anything about his parents. He has a mother and a sister, as we know for now about his family by his Instagram account. He posted the picture of his mother and sister, Taylor on Instagram during 2015’s Easter. 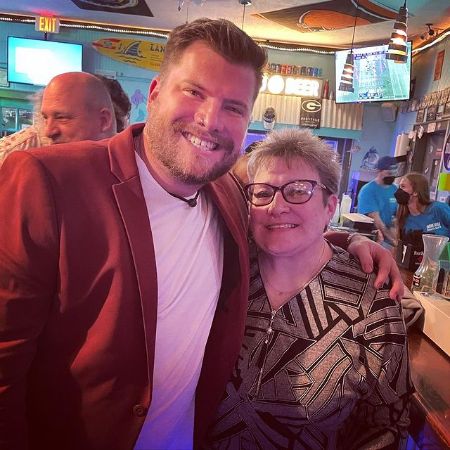 Caption: Codi Butts with his mother.

Though Codi Butts has not talked much about his family, he loves to hang out and spend time with his friends and family. For Codi Butts to appear in MTV’s Floribama Shore, his younger sister has a high hand. She encouraged him to audition for the show. Further information on Codi Butts family will be updated soon!

But when asked about whom he will choose to marry from the Floribama Shore castmates, he said:

I would marry Candace because she’s wife-material. She’s going places, she’s got a good head on her shoulders, and she’s pretty

Will Codi be able to win the heart of Candace Rice and get married to Candace? To know, watch Floribama Shore episodes.

Well, Codi is single at present and is ready to mingle. But he wishes to find love in the Floribama Shore. Will one of the ladies from the show be Codi Butts girlfriend?

Though Codi Butts has no girlfriend, he likes Aimee Hall too much. When asked about who is your favorite castmate, he said:

Codi also mentioned that he would like to date Nilsa Prowant. Let’s see what will happen on the show. However, it seems that he has no any chance of dating Aimee as he made mean comments to Aimee Hall recently and hurt her. Aimee rejected Codi’s proposal and said:

Codi, I love you as a brother. It’s not going to happen

So, it will be more interesting to watch whether Codi will find love on the show or not. Who will be Codi Butts girlfriend? Do you know?

As Codi used to be a bartender and a basketball coach, he has not earned enough money so far. However, he will be paid a splendid amount of money per episodes on the Floribama Shore.