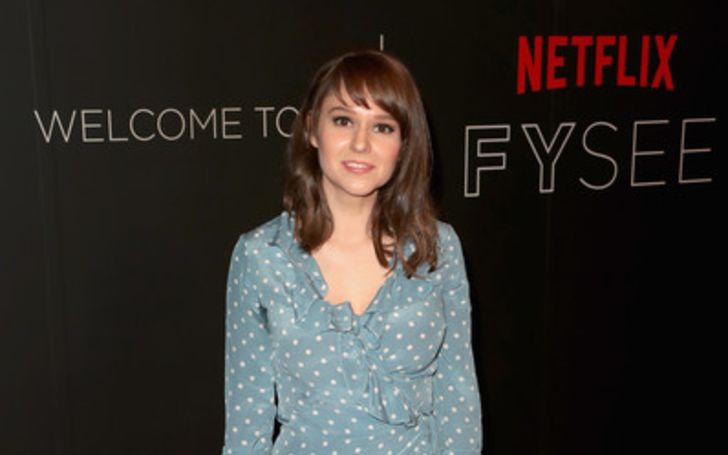 If you ever watched the popular Netflix T.V. series, Love, then you will surely recognize one of its main cast Claudia O’Doherty. The Australian actress portrays the lovable character, Bertie Bauer in the hit comedy series.

The 35-years-old began her acting career not long ago, but she already managed to earn a name for herself. Besides, her professional life, is there someone special in her life? What is she doing at present? To know all just scroll through the article below.

Who is Claudia O’Doherty?

Claudia O’Doherty is an Australian actress, writer, and comedian who came to fame for her works like Love,  Inside Amy Schumer, and Problems. The actress is also a big screen performer and appeared in movies like Trainwreck (2015), The Circle (2017), The Festival (2018), and Fun Mom Dinner.

The beautiful lady is the winner of Melbourne Fringe (Best Comedy Award) and the Brisbane Comedy Festival Award for her show Monsters of the Deep. Additionally, Claudia played the main role in the American romantic comedy web television series Love. She portrayed the character of Bertie Bauer in all three seasons from February 19, 2016 –March 9, 2018.

Claudia O’Doherty’s Personal Life; Is She Dating Someone?

Claudia O’Doherty is possibly single at the moment and there seems to be no one, she is dating. Pretty much everything is already known about her professional life. However, the charming star is not too keen on talking about her love life in interviews as well.

On her accounts, the Inside Amy Schumer star shares pictures and videos with her family, friends, and co-stars. Moreover, she also promotes her movies and T.V. series on it.

Truly thrilling to go to the premiere of Extra Ordinary, a movie I love, that shockingly, I am in.

Through her social media, we can clearly see that Claudia enjoys her current lifestyle. Doherty usually has her hands full with works but on her spare time, she savors the moment with her family and close friends.

How Much is Claudia O’Doherty’s Net Worth?

The experienced actress already played in numerous hit film in her short career. Namely, the film Trainwreck (2015), where she portrays the role of Wendy. The romantic comedy movie made on a budget of $35 million grossed more than $140 million at the box office worldwide.  In the movie, Claudia acted alongside the likes of Amy Schumer, Bill Hader, Brie Larson, John Cena, Vanessa Bayer.

You May Also Like: John Cena’s Ex-wife Elizabeth Huberdeau’s Net worth!

In the same way, the actress played a minor role in the 2017 techno-thriller movie The Circle. The film featuring Emma Watson and Tom Hanks collected $40.7 million at the budget of $18 million.

It’s the teaser poster for @extraordinaryfilm, which premieres at SXSW this weekend. Everyone who made it is good!

A post shared by Claudia O'Doherty (@dingdongitsclaudiaodoherty) on Mar 5, 2019 at 9:11am PST

The Festival actress will appear in the movie, Extra Ordinary which will release in 2019. O’Doherty is a co-author of the books 100 Facts About Pandas and 100 Facts About Sharks with David O’Doherty.

Claudia O’Doherty stands at a height of 5 feet 2 inches and weighs around 54 Kg. As for her body measurements, she has a good body shape of 33-25-35 inches.

The Inbetweeners 2 actress’ bra size is 38 US. Besides, both her eyes and hair are Dark brown in color.

Where and when was Claudia O’Doherty born?

Who are Claudia O’Doherty’s parents?

What nationality does Claudia O’Doherty belong to?

What is Claudia O’Doherty’s ethnicity?

Which is Claudia O’Doherty’s Debut movie?

Which hair color does Claudia O’Doherty have?

What is Claudia O’Doherty’s eye color?

How tall is Claudia O’Doherty?

What are Claudia O’Doherty’s body measurements?

How old is Claudia O’Doherty?