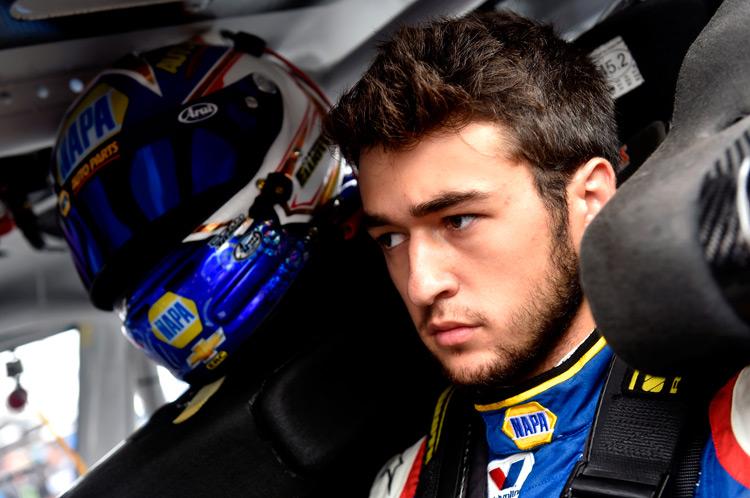 An American professional stock car racing driver, Chase Elliott earned most popular driver of 2015 NASCAR Xfinity Series for two times in a row. He is the first recruit to win NASCAR Nationwide series during 2014. Now, he is tagged as No. 9 and No. 88 driving Chevrolet Camaro ZL1 for Hendrick Motorsports and the Chevrolet Camaro for JR Motorsports respectively.

The young star racer is dating Kaylie Green, a student at the University of South Carolina. Their relationship is quite secretive on how long they have been dating but not so confidential when Kaylie cheers him up from rooftops.

Well, Kaylie was cheering Chase Elliot at the Daytona 500. He was racing at first position in final five leads, but unfortunately, he slipped back running out of fuel. Hence, Chase Elliott’s girlfriend, Kaylie Green tweeted a broken heart message since her boyfriend loss the position.

Kaylie Green is a daughter of NASCAR driver David Green and sister of Austin Green who is also a race car driver. Doesn’t it make us feel that she is meant to hover around car racer men around?

Born in a car race family, Green graduated degree in public relations from the University of South Carolina- Columbia. Two years ago, she did the internship in Blue Line Technologies, Inc. She has also worked at Lavender Boutique in Charlotte.

“Having Kaylie is the biggest thing that has happened to me. I had always thought that racing was all there was. Now for the first time, there is something else that is more important in my life than racing,”

Chase Elliot Career As a Racer and His Net worth!

Among 40 racing competition, Elliot has ranked in between top ten positions for thirty-eight times. After the sixteenth birthday, he became the youngest racer to win over Snowball Derby. In the year 2011, Elliott first signed the three-year contract with Hendrick Motorsports. He was able to carter among top 10 ranking except for 17th position due to crash in 2012.

Chase Elliot was announced to be the full-time competitor in nationwide series in 2014. He drove the No. 9 Chevrolet for JR Motorsport and attained victory on the O’Reilly Auto Parts 300 at Texas Motor Speedway. He bagged VFW Sports Clips Help a Hero 200 and Nationwide Series championship consecutively.

During Daytona 500 debut, Chase Elliott won the youngest pole sitter by driving speed of 196.314 miles per hour. To grasp experience in the more extensive circuit, he even raced in five ARCA Racing Series during 2013. The estimated figure of Chase Elliott net worth is $ 2 million.

Born on November 28, 1995, Chase Elliot is a son of Bill Elliot, who won Winston cup series in 1998. The young racer also appeared in The Dude’s Perfect Show, Ridiculousness and granted voices in Pixar movie Cars 3 as well as Nickelodeon’s Blaze and the Monster Machines.