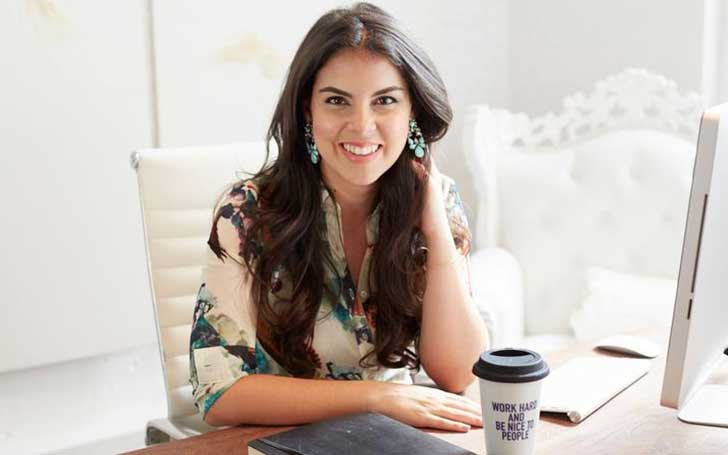 Caroline Ghosn is an American entrepreneur, who is the CEO and founder of Levo, a network which helps to navigate the workspace. She is also a member of the Global Shaper Community of the World Economic Forum. She spoke at the annual World Economic Forum in Davos in the year 2014.

Caroline is among the ‘Most Creative People in Business’ in the year 2013 by the Fast Company. Her father, Carlos Ghosn got arrested on 19th November this year in Tokyo, Japan due to the case of fraud and corruption on Nissan.

Caroline began her career at a very young age and has worked hard to attain the success, which she now enjoys. However, many people want to get familiar with Caroline Ghosn husband and their wedding details. Today, we’ll be delving into Caroline Ghosn wiki facts, age, height, father, net worth, husband, net worth, and wedding.

Caroline Ghosn tied the knot with her husband, Nicholas Flander, a co-founder and CEO of Opus 12 on 7th of July, 2018 in a small Island in Naoshima Japan. The ceremony also had a feast of sushi, sashimi, tempura, and seven kinds of dessert.

After the wedding, there was dancing, tasting of Japanese whiskeys, and an acoustic concert that lasted until sunrise. Altogether fifty-five guests attended the three-day wedding event at Benesse House, a hotel and museum, which Ando designed.

Nicholas proposed his now wife, Caroline, in the year 2015. In addition, they were the first non-Japanese couple to get married at Benesse House.

The guest even got the chance to tour the Art House Project, which is a cluster of old fishing cabins that various artist helped transform, along with the museums of the Benesse complex. Caroline and her husband are happy in their marital life, Nicholas. However, the duo maintains a low-key married life.

After graduating, Caroline went to work for strategic consultancy as a Business Analyst and then Sustainability and Resource Productivity Fellow, which focuses on clean-tech and the environment. In 2011, she left her position to launch Levo to help millennials achieve success in the workplace.

Don’t Miss: Chef Michael Olson’s Married Life With Wife; Know His Wiki-Bio Including His Net Worth, Career, Death Rumors, and Much More!

Caroline currently works as the CEO and Chairman of Levo’s Board of Directors. She has more than 9 million members and 30 local Levo chapters around the world.

Former Facebook COO, Sheryl Sandberg, is also an investor in Levo and a personal mentor to Caroline. Since launching Levo, Caroline has been named to Fast Company’s list of the Most Creative People in Business in the year 2013.

As for her net worth, Caroline has an estimated net worth of $60 million. Her father, however, accumulated a net worth of $US100 million from his career.

Caroline Ghosn was born in the year 1987 in New York City, New York, USA. Her birthday falls on 29th January, which makes her age 31.

Caroline is the daughter of Carlos Ghosn, CEO of Nissan and Renault, and Rita Ghosn. She grew up with her two sisters named, Nadine and Maya Ghosn and a brother named, Anthony Ghosn.

Caroline went to Stanford University and graduated with a B.A. in International Political Economy and Environmental economics. She lived in six countries to the date and speaks four languages. Caroline is quite tall. She possesses the height of 5 feet 8 inches.