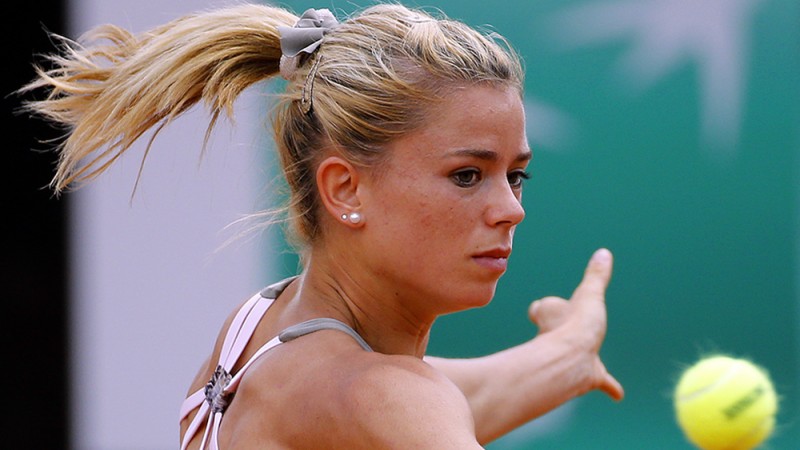 The Italian professional tennis player Camila Giorgi has made a lot of reputation and admiration for her aggressive style of play and regular flat groundstrokes. After winning her first ITF title in 2009, she made her WTA Tour main-draw debut at the 2011 Wimbledon Championships. This year, Camila made it to the quarter-final of Wimbledon where she lost against Serena Williams. However, it was her first Grand Slam quarterfinal and earned huge applauds from her fans who are willing to know her love life. So, who is Camila Giorgi boyfriend?

Talking about her personal life, Camila Giorgi is single at present. By that, it doesn’t mean she has never been in romantic dating affairs before.

Previously, Camila was dating her now ex-boyfriend, Giacomo Miccini back in 2016. While dating, she used to post plenty of pictures together with her boyfriend on Instagram. They were also rumored to be engaged. Unfortunately, they couldn’t sustain their relationship and broke up in less than a year. Other than that, there aren’t any records of her past boyfriends and relationships.

As of now, Camila Giorgi hasn’t married yet and enjoying her single life to the fullest. If she finds the man of her life, she might get married someday. Perhaps Camila is waiting for the right man and right time. We have to wait a little more to see Camila getting married.

Speaking of Camila Giorgi net worth, over the years, she has made millions of net worth from her tennis career. Winning various tournaments and tours, she has increased her net worth. Throughout her career, Camila has participated in numerous important tournaments which have given her immense net worth. Looking at her social site, she is living her life in a grand way traveling places.

In her early career, Camila showed off her skills in front of Adriano Panatta, and coach Nick Bollettieri. They encouraged her to pursue her dreams. She finished as a runner-up in the Nike Junior Tour in November 2005. After that, she debuted as a professional in 2006 in $10,000 tournaments.

In 2009, Camila took part in her first career ITF tournament in Katowice in August and amassed 33 wins and stood at 285 on WTA rankings. Despite having a downfall in 2010, in the year 2011, she made it to the semi-finals in two ITF tournaments. In 2014, Camila made it to the finals of BNP Paribas Katowice Open and WTA as well. In 2017, she reached the semifinal of the Shenzhen Open, quarterfinal of Birmingham and third round of Wimbledon.

Camila Giorgi was born in 1991 in Macerata, Italy. She was born as the daughter of her parents, father Sergio Giorgi and mother Claudia Giorgi. Her parents speckled her passion for the game and fortified her to be good at it. In her childhood, she used to play tennis, and her dad used to her trainer. She also participated in various junior tournaments.

Camila grew up along with her two brothers and one sister. She shares strong bonding with her siblings and often posts their photos on her Instagram.

The Tennis player Camila celebrates her birthday on 30th December, which makes her age 26. As she has Argentina descent from her father’s side and Italian descent from her mother, she is of the mixed ethnicity of Italian origin.

Camila Giorgi looks stunning with her alluring personality and athletic body structure having a height of 5 feet 6 inches. Her Instagram account has more than 156k followers while her Twitter has more than 9k followers.