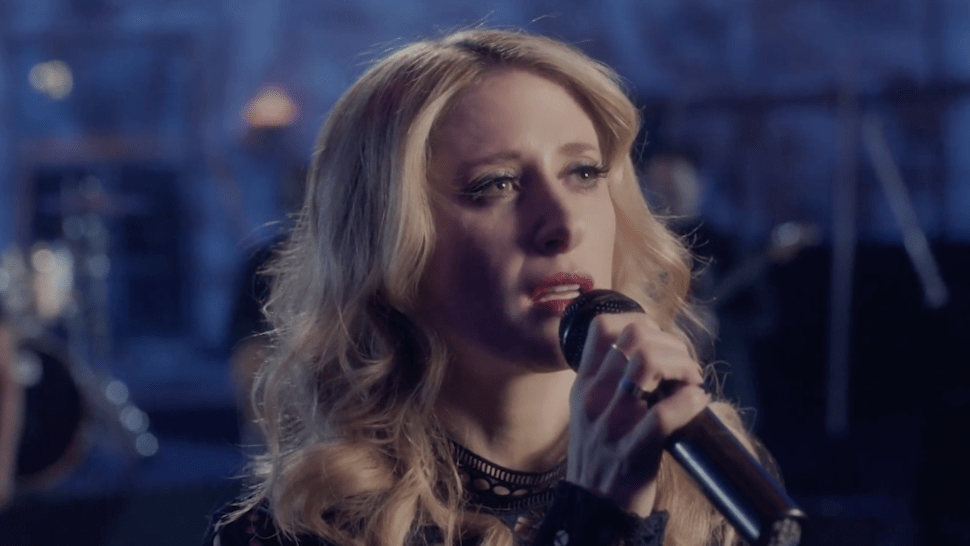 Canadian actress and singer, Caissie Levy rose to prominence through musical theatre on Broadway and the West End. Her earlier theatre credits included Elphaba in Wicked, Penny Pingleton in Hairspray and Sheila in Hair. She created the role of Molly Jensen in Ghost the Musical and played Fantine in the 2014 Broadway reboot of Les Miserables. Levy created, and stars as, Elsa in Frozen on Broadway.

Besides her theatrical performances, only a few people are familiar with her personal life. So, let’s dig into Caissie married life, husband, movies and TV shows, net worth, and some exciting wiki facts.

In behalf of Frozen on Broadway’s first performance, four of the twelve new songs in the show will be released every Friday. The first song is a solo from Elsa (played by Caissie Levy) called “Monster.” Although we can’t sing it as soulfully as the Queen herself, we’ve already started memorizing the powerful lyrics.

“Monster” will be performed in Act Two during Elsa’s moment of introspection atop the North Mountain, where she seeks isolation from a group of townspeople on their way to confront her.

The three other Frozen on Broadway songs that will be released on subsequent Fridays includes a duet by Anna and Kristoff called “What Do You Know About Love?,” an interior monologue by Elsa called “Dangerous to Dream,” and an Act Two solo from Anna called “True Love.”

36-year-old Caissie Levy is a married woman. Her husband is David Reiser who is also a stage actor. Here, we will share some information about Caissie Levy’s married life with husband David Reiser, their children, and her past affairs.

Caissie is currently experiencing a blissful married life with her husband, David Reiser. The couple met through mutual friends off stage and soon started dating. Not long ago, Caissie and David gave some insiders about their dating life. Caissie proudly shared that she spilled beer on her future husband during their first date at Chumley’s.

At the same time, David also shared that he let her win a game of ping-pong so that he could get on the bright side of the actress.

The couple started dating back in 2006. After dating for five long years, Caissie Levy married her boyfriend, David Reiser on 30th October 2011. Their wedding made headlines that took place at Soho Beach House, Miami Beach.

Fast forward to 2016; they gave birth to their first child, a son Izaiah Lee Reiser in April of the year. Her son is currently a year old, and the proud mother can be seen posting numerous pictures of her child on her Instagram page now and then. She also loves to share photos of her husband on her social media showcasing how much she loves her.

getting out of rehearsal early means lunch with my loves

Moreover, there are no rumors of the couple splitting or having a divorce which is impressive.

Levy was born to Jewish parents Mark, a general practitioner, and Lisa Levy, an administrator at her husband’s practice. Born as Caissie Shira Levy on 15 April 1981 (age 37) in Hamilton, Ontario, Canada, she has two elder brothers, Robi and Josh, who are film directors/writers/producers. Her brothers are famous as The Levy Brothers.

Caissie Levy graduated from Westdale Secondary School in 1999. Set to study Shakespeare in Canada, Levy auditioned for New York’s American Musical and Dramatic Academy (AMDA); on a whim, she did and was accepted.

In 2008, Caissie Levy starred as Elphaba in the Los Angeles sit-down production of Wicked. She had previously understudied the role on Broadway and briefly served as a standby in Los Angeles. She next starred as Sheila in the Broadway revival of Hair in 2009–2010 at the Al Hirschfeld Theatre. Levy transferred to the West End revival in 2010 at the Gielgud Theatre.

In 2011–2012, Caissie Levy originated the role of Molly Jensen in Ghost the Musical at Manchester Opera House and then in London’s West End at The Piccadilly Theatre. She transferred to the Broadway production in 2012 at the Lunt-Fontanne Theatre.

Caissie Levy released an EP in 2013 and planned two concerts at the London Hippodrome Casino the same year. Also in 2013, Levy starred as Sara in the Manhattan Theatre production of Murder Ballad, a musical by Trip Cullman at the off-Broadway Union Square Theatre. She played Fantine in the revival of Les Miserables at the Imperial Theatre in 2014–2015.

Levy originated the role of Elsa in the stage adaptation of Frozen, which opened in Denver in 2017 and moved to Broadway in February 2018.