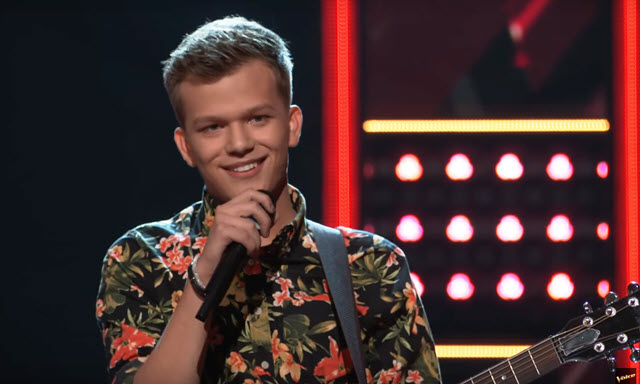 Not only the coaches are in awe of his voice, but even the audiences also accumulated 57% of votes in the battle between Braid and Lee. Get to know everything about Britton Buchanan dating affairs, relationships, presence in The Voice, age, coaches, bio and wiki.

The Voice powerhouse Britton Buchanan is not single as he has been dating Livia Faith. The couple being on a bit same side of age numbers (she is seventeen while he is eighteen years old), met on the Blind Audition of The Voice. Isn’t Britton Buchanan fortunate enough to grasp opportunity and girlfriend in the same platform?

Along with the show The Voice, Britton Buchanan is trying the luck of acknowledging his girlfriend Livia Faith since the blind auditions commenced in September.

“We met each other in September, a long time ago, I said it’s a long time, but it doesn’t feel like a long time. It doesn’t. When you think about that, we’ve been doing this show half a year, we’ve all known each other and lived with each other on and off for half a year. It’s been crazy, but yeah, she’s amazing. I think she may be coming out next week to see me. We get a couple of comp tickets, so she’ll be flying out.”

Britton Buchanan in ‘The Voice’

A North Carolina native Britton Buchanan performed Trouble by Ray Lamontagne in the blind audition of The Voice, Simultaneously; coaches Blake Shelton, Alicia Keys and Adam Levine turned the chairs for the young Britton Buchanan. However, in a counterpart, one of the coaches blocked the coach Adam Levine.

Sadly, Britton Buchanan could not get to select Adam Levine though he watched his I Love LA eighty times. Similarly, Adam frequently accused Blake of using the blocking tap- a new element in the show.

Caption; Britton Buchanan performing trouble in the blind audition of The Voice

Well, Blake finally admitted the greed of taking Britton Buchanan into his team. On the same note, Adam advised the Carolina native to take in Alicia Keys in sort of revenge for Blake Shelton, stabbing back

“You’re a great singer, but Academy Award winner you are not,”

“Alicia is a great salesperson, and she roped me right in with everything that she said. So she pretty much had me in the palm of her hand as soon as she started talking.”

Caption; Britton Buchanan in the team of Alicia Keys

His mother is very supportive of what he chose for the career. She knew that she was not raising the future athlete. Britton mother had noted his exhibition in arts rather than in sports. So, his mother opened up on how Britton would stand in the outfield and go for the flowers amidst the baseball game.

Britton Buchanan was fortunate enough to receive a gift of $60 guitar at the young age. And when he was at the age of thirteen, he joined the classic rock cover band. In an instant, he continued fulfilling dreams of parents as well as himself.

Now, Britton Buchanan age is eighteen years old. He is from Sanford, North Carolina. At the age of eight years old, he began playing guitar and took a serious note of it by the age of twelve years old. Two years later, Britton Buchanan began grasping the notes of the piano as well. While Britton was auditioning for Trouble, he was a senior at Lee County High School.

Before appearing in the voice, he won the number of titles in the local Carolina competitions. When he was fifteen years old, he broke in chance with George Morris, T.C. Mann and Ethan Ross in a band called Brick City South. The band eventually succeeded in the title of best in the genre.

Britton Buchanan Instagram followers are in raise with 40.5K fan followings to date. Furthermore, his performance of Small Town in the platform of The Voice made him the most streamed artist in iTunes.