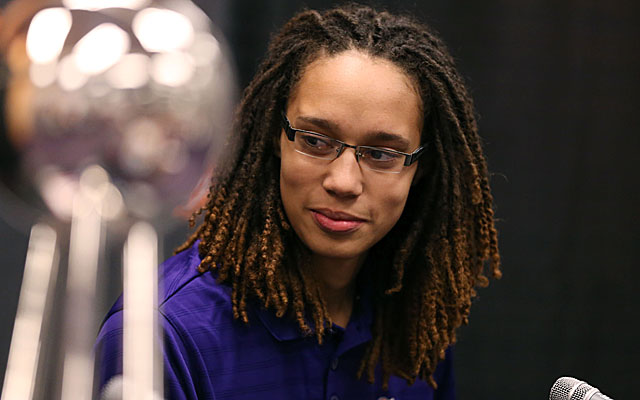 No matter how hard we advocate, the discrimination by gender is still existing. Moreover, women are paid less comparing to what men receive.  Recently, some WNBA players claimed that the league should upsurge its player salaries.  Amidst the list, American professional basketball player Brittney Griner is also one.

Brittney currently plays for the Phoenix Mercury in the Women’s National Basketball Association (WNBA). Previously, she played college basketball at Baylor University in Waco, Texas. It is surprising to know, but she is the only NCAA basketball player to score 2,000 points and block 500 shots. In the year 2012, the three-time All-American earned the title of the AP Player of the Year and the Most Outstanding Player of the Final Four.

Besides that, let’s dig out some facts of Brittney Griner’s dating, marriage, children, net worth, salary, and wiki!

Who is Brittney Griner Dating?

Nobody has ever thought that Brittney Griner will again be into something serious after her divorce. However, everything happens for certain reasons and she has found a beautiful purpose.

Currently, she is dating her partner Relle.

On April 17, 2013, Brittney publicly came out as a lesbian. In an interview, she mentioned that as a child, she went through bullying,

“It’s hard. Just being picked on for being different. Just being bigger, my sexuality, everything”.

Beforehand, Brittney came out to her parents in high school. As her father did not accept her gracefully, she lived with an assistant coach for six weeks. Nevertheless, she has ultimately found the one who seems to be the world to her.

When you find the person that knows what you need and want before you even have to wish or ask for it….❤️NEVER LET HER GO❤️ {I’m never letting go Buttercup} @iloverelle__ =

As of now, Brittney and her partner Relle hasn’t married yet. However, she expresses her love to her partner by calling her wife. Isn’t that romantic?

On August 14, 2014, Brittney Griner announced her engagement to fellow WNBA player Glory Johnson. Nevertheless, after eight months of engagement, police arrested them on charges of assault and disorderly conduct on April 22, 2015.

Must Read: Who is Candace Parker married to after divorcing the first husband? Know her Married Life, Children, Net Worth, Salary, and Wiki-Bio

The cops broke up a fight between the two in their Goodyear, Arizona home. Despite that, the duo married on May 8, 2015, in Phoenix, Arizona.

On May 15, 2015, the WNBA suspended the couple for seven games each after Brittney pled guilty to disorderly conduct charges. Following that, she completed 26 weeks of domestic violence counseling.

On June 4, 2015, the duo announced that Glory was pregnant with twins. However, after a day Brittney filed for a termination of the marriage mentioning fraud and coercion.

She cited that she had no biological connection to the children. Later, it revealed that Glory conceived the twins through IVF treatment using her eggs and a sperm donation.

Eventually, Brittney and her ex-wife Glory ended their marriage with a divorce in June 2016.

Brittney Griner’s Net Worth and Salary

Talking of Brittney Griner’ net worth, she began playing professional basketball since 2013 after the Phoenix Mercury selected her. She was as the first overall pick for Phoenix in the 2013 WNBA draft.

She earned the title of WNBA all-star having an average of 3.0 blocks per game. Due to her right knee injury, she missed the 2013 WNBA All-Star Game.

Texas needs to be on the right side of this issue! Read my OpEd with @Layshiac here + share! https://t.co/Jh8MxCdjSU pic.twitter.com/lxqtWeFneZ

In 2014 season, Brittney scored a career high of 15.6 points, 8.0 rebounds, and 3.7 assists per game. The same year she set another WNBA record with 11 blocks along with 21 points and eight rebounds in a game against Tulsa.

You Might Like: WNBA Player Elena Delle Donne’s Upcoming Marriage Details! Reveals She is a Lesbian. Once Talked About Her Boyfriend

On 12 March 2017, Brittney signed a multi-year contract extension with the Phoenix. In addition to Brittney Griner’s net worth, in 2016, the U.S. Olympic women’s basketball team won the gold in the Summer Olympics.

Brittney Yevette Griner was born in 1990 in Houston, Texas to her parents Raymond Griner and Sandra Griner. She spent her childhood with her sisters,  Shkera Griner, and Pier Griner and their only brother Decarlo Griner.

Brittney joined Nimitz High School. On 7 May 2009, the Mayor of Houston Bill White declared the day as Brittney Griner Day.

Also, see: WNBA star Diana Taurasi talks about her fairytale wedding with her lesbian partner, opens up about her career highlights!

She went to Baylor University and became the only NCAA basketball player to score 2000 points and 500 shots block.

Brittney celebrates her birthday on 18 October every year that makes her age 28 at present. She is of African American ethnicity.

The WNBA player has a towering height of 6 feet and 9 inches.